WASHINGTON — It was Hempy Pet CBD Soft Chews, Mile High Labs and Women Grow, among countless others, squaring off against the likes of the Marijuana Victims Alliance, concerned primary care doctors and a lawyer who admitted he couldn’t wait to sue — all jammed into an overflowing auditorium for hours Friday on the Food and Drug Administration campus.

F.D.A. hearings are usually tedious affairs. But this one — called to begin the process of figuring out which products in the burgeoning cannabis industry can be legally sold in the United States — was the hottest ticket in the capital. More than 400 applicants, from the U.S. Hemp Roundtable to blue chip law firms, had petitioned the agency for a chance to testify. It had to create a complex lottery system to whittle down the list to a lucky 120.

Each was given either two or five minutes to make a case to the presiding panel of top F.D.A. officials, amounting to an all-day volley of claims and counterclaims over matters of safety, efficacy and good vibes.

From Susan Cromer, of LilyHemp (Infused Herbal Goodness): “I have been privileged, awed and at times brought to tears by the positive changes CBD has brought to my customers’ lives.”

From Michelle Peace, an assistant professor of forensic science at Virginia Commonwealth University: “We have seen a rash of reports nationwide from people being poisoned from taking CBD products.”

From David Evans, a lawyer for Cannabis Industry Victims Educating Litigators, who noted he has 1,000 cases pending against the opioid industry: “If our dreams come true, we’ll have the same thing going against the marijuana industry in a year or two.”

The F.D.A. has been skeptical of the rapidly growing cannabis industry, but it is under increasing pressure from Congress to ease the path to market for cannabis-derived products. These products are different from medical marijuana, which a growing number of states allow for treating severe pain, nausea and other ailments. Conservative estimates predict that sales of CBD in the United States could be $16 billion by 2025. 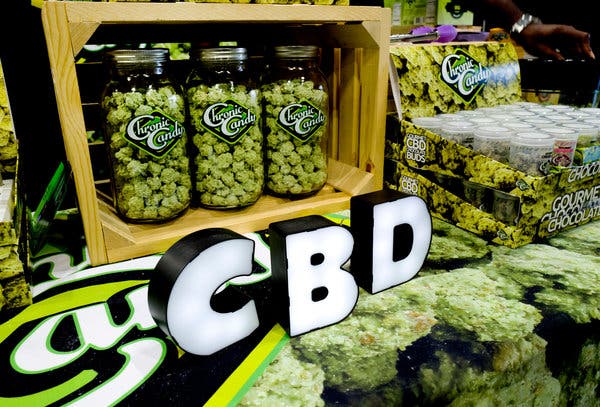 CBD chocolates on display at the Big Industry Show at the Los Angeles Convention Center. The F.D.A. has been skeptical of the compound’s benefits.CreditRichard Vogel/Associated Press

Many cannabis companies are already selling cannabis products ranging from soft drinks to bath salts in stores and online, but the F.D.A. will eventually decide whether they can continue to do so. Though CBD is not currently allowed in dietary supplements or foods, the F.D.A. had tended to overlook these infractions.

Most of the academic researchers who spoke at the hearing agreed that CBD had potential health benefits, but many also argued that more clinical trials were needed before a sound decision could be made on whether to let CBD get further into the food supply. Numerous speakers cited problems with adulterated CBD products, found to include pesticides, lead or other metals; inconsistent CBD levels leading customers to take too high a dose and get sick; and research indicating a potential for liver problems and other adverse events when taking CBD. The potential for addiction was also raised.

Cannabis is a plant family that includes hemp and marijuana, which have more than 80 biologically active chemical compounds. The most commonly known are tetrahydrocannabinol, which is a psychoactive chemical, and cannabidiol, which does not produce the high that THC does.

For many years, the federal government deemed both plants to be controlled substances. The 2018 farm bill removed hemp and derivatives like CBD from the controlled substance list, as long as products containing them didn’t have more than 0.3 percent THC. But the law preserved the F.D.A.’s authority to regulate cannabis compounds.

The World Health Organization said last year that CBD is generally well tolerated, with a good safety profile and no addictive effects. It also noted the potential for adverse effects caused by interactions between CBD and medications people may be taking.

In the United States, health agencies have called for more research into potential therapeutic uses, as well as into health risks. The F.D.A. has taken a harder line, pointing out the lack of quality control in the field and stressing the absence of data proving that CBD products are safe, whether they work and what the proper dosages may be if they do work.

“I don’t think that CBD is doing anything approximating what people are purporting is its magic quality,” Dr. Scott Gottlieb, who stepped down as F.D.A. commissioner in April, said in an interview. “It’s a real safety issue here. There are risks of accumulated effects. It’s not a completely benign compound.”

Oversight of cannabis is complex and crosses three federal agencies. The federal Drug Enforcement Administration issues registrations for growing and processing marijuana for medical research. The Department of Agriculture is developing a plan to regulate hemp, although the states may also do so if they meet certain criteria.

The F.D.A. regulates drugs, including those derived from marijuana, and it can also take enforcement action against companies selling foods or dietary supplements that have CBD or THC ingredients, which are considered drugs. But it has done so sparingly, only in cases where the companies have made what were considered outrageous health claims for their products, such as claiming they cure cancer, Alzheimer’s disease and other illnesses.

The hearing on Friday was a first step in what is likely to be a long process to define a legal path to market for CBD products that the agency considers safe.

“Congress had the expectation that CBD from hemp would be able to be put in the food supply when they passed the farm bill,” Dr. Gottlieb said. “But it very explicitly preserved F.D.A.’s authority, so the F.D.A. has to create a framework for it to be contemplated as a component in food.”

How it will do so has occupied many Washington lawyers for the past few months. A recent CBD seminar at the annual Food and Drug Law Institute conference was standing room only. Law firms have been giving webinars for their clients, trying to help them straddle the line between getting too far out in front of the regulations and landing in jail, or missing the chance to claim a strong place in the market.

“This is a new gold rush,” said Marc Scheineson, a lawyer with Alston & Bird in Washington, D.C., who represents a company that makes synthetic pharmaceutical-grade CBD. “The horse is so far out of the corral here that it will be interesting to see what F.D.A. decides to do — or can do at this point.”

Mr. Scheineson suggested the F.D.A. might use its regulation of folic acid as a road map for CBD. Consumers can buy folic acid, a B vitamin, over the counter for some uses, but it must be prescribed by doctors at higher concentrations.

The agency could also require businesses to submit a petition demonstrating safety.

Jonathan Miller, a lawyer for the U.S. Hemp Roundtable, a coalition of dozens of hemp companies, told the F.D.A. panel that CBD is safe but called on the agency to police the bad players in the industry.

“Our enemy is not the F.D.A.,” Mr. Miller said in an interview before the hearing. “Our enemies are CBD companies that make false claims or sell products that are bad.”

For his part, Dr. Gottlieb took special issue with CBD for pets.

“Putting CBD into pet food is absurd,” he said.