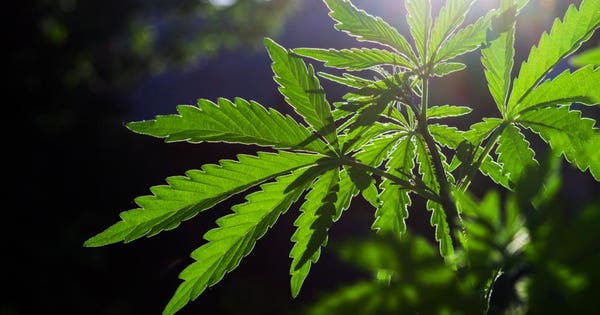 Federal officials would be blocked from punishing banks for working with marijuana businesses under an annual spending bill released by congressional Democratic leaders on Sunday.

The legislation, which is set to be considered by a House subcommittee on Monday, would also remove a longstanding rider that prevents the city of Washington, D.C. from spending its own money to legalize and regulate recreational cannabis sales.

Although a growing numbers of states are moving to legalize and regulate marijuana—with Illinois lawmakers becoming the latest to pass a bill ending cannabis prohibition on Friday—many banks remain reluctant to work with licensed businesses in the industry out of fear of being subject to ongoing federal penalties.

Those hesitations could be at least partially allayed by the new House bill, which includes language barring federal regulators from punishing financial services providers for maintaining accounts for state-legal cannabis businesses:

SEC. 633. None of the funds made available in this Act may be used to penalize a financial institution solely because the institution provides financial services to an entity that is a manufacturer, a producer, or a person that participates in any business or organized activity that involves handling marijuana, marijuana products, or marijuana proceeds, and engages in such activity pursuant to a law established by a State, political subdivision of a State, or Indian Tribe: Provided, That the term ‘‘State’’ means each of the several States, the District of Columbia, and any territory or possession of the United States.

The provision only applies to spending legislation covering the Treasury Department, however, and thus would not shield banks from any enforcement activities carried out by the Justice Department, which is funded under a separate bill. It is also attached to the annual appropriations process, meaning it would have to be proactively renewed year after year if it is enacted.

Meanwhile, though, a more comprehensive and permanent proposal to shield banks from being punished for serving cannabis businesses is advancing in Congress.

In March, the House Financial Services Committee approved the bill, known as the Secure And Fair Enforcement (SAFE) Banking Act, in a bipartisan vote of 45 to 15. Advocates expect that House Democratic leadership will bring the legislation, which currently has 191 cosponsors—nearly half of the chamber’s membership—to the floor within the next several weeks.

An identical proposal in the Senate has 30 lawmakers—almost a third of the body’s members—signed on. While Banking Committee Chairman Mike Crapo (R) has so far refused to commit to bring the bill up for a hearing in his panel, pressure is mounting.

Last month, the Congressional Budget Office issued a report projecting that the bill would generate an increase in deposits in banks and credit unions, and would ultimately lead to savings for the federal government after initial implementation expenses are accounted for.

And a handful of other Republican senators, including at least one who is a member of Crapo’s committee, have lobbied him to give the cannabis banking bill due consideration.

In 2014, the House of Representatives approved a floor amendment similar to the provision currently included in the new spending bill, but it was not enacted into law. The full House Appropriations Committee defeated a cannabis banking rider last year under Republican control, so its inclusion in the base subcommittee legislation as introduced by Democrats marks a significant shift.

D.C. Could Finally Spend Its Own Money To Legalize Cannabis Sales

The draft House appropriations bill also removes a provision that for years has blocked the city government in the nation’s capital from spending its own locally raised tax dollars to legalize and regulate the production and sales of marijuana.

Washington, D.C. voters approved a ballot measure in 2014 that allows low-level possession and home cultivation of cannabis, but consumers who are not medical marijuana patients have no legal way to purchase the drug. That’s because Congress has repeatedly enacted an appropriations rider pushed by Rep. Andy Harris (R-MD) that stands in the way.

Here’s how the anti-marijuana rider appeared in last year’s version of the spending legislation:

Sec. 809. (a) None of the Federal funds contained in this Act may be used to enact or carry out any law, rule, or regulation to legalize or otherwise reduce penalties associated with the possession, use, or distribution of any schedule I substance under the Controlled Substances Act (21 U.S.C. 801 et seq.) or any tetrahydrocannabinols derivative.

(b) No funds available for obligation or expenditure by the District of Columbia government under any authority may be used to enact any law, rule, or regulation to legalize or otherwise reduce penalties associated with the possession, use, or distribution of any schedule I substance under the Controlled Substances Act (21 U.S.C. 801 et seq.) or any tetrahydrocannabinols derivative for recreational purposes.

In addition to completely deleting the language standing in the way of D.C. using local money to pay for marijuana legalization, the legislation as introduced also cuts out the provision blocking the use of federal funds to lower cannabis penalties.

Last month, District of Columbia Mayor Muriel Bowser (D) referred a marijuana legalization bill to councilmembers in anticipation of Congress removing the ban under the newly Democratic-controlled House of Representatives. She cheered the new congressional legislation in a tweet on Sunday.

Now, the @AppropsDems have a bill to remove the reprehensible rider so that we will be able to legalize/regulate its sale

The spending proposal, as introduced by the House Appropriations Subcommittee on Financial Services and General Government, if approved by that panel, would next head to the full Appropriations Committee and then to the House floor. It could be amended at either stage and will later be merged with parallel legislation in the Republican-controlled Senate, meaning that it is far from certain that the marijuana policy implications in the initial House draft will be enacted into law as currently drafted.

Still, their inclusion in the base bill on the House side bodes well for legalization advocates, as the Senate Appropriations Committee has historically been more favorable to cannabis amendments—even under GOP control—than its House counterpart has, although it did block consideration of a banking-related provision last year.

And while the Senate panel issued initial versions of the spending legislation free of D.C.-related marijuana riders in years past, in 2018 it included the ban under new subcommittee chairman Sen. James Lankford (R-OK), who opposes cannabis reform.