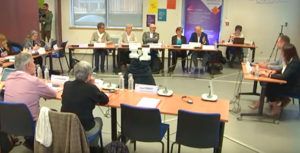 Executives from international medical cannabis companies Tilray, Bedrocan, Aurora, Canopy and others met in May with a French committee charged with analyzing medical cannabis.

A potential medical marijuana program in France could soon be at the discretion of the nation’s Health Ministry after a group of senators agreed in principle to approve cannabis for therapeutic use.

However, important hurdles must be cleared before France joins the ranks of neighboring Germany in establishing a medical market – and it could still be months before any products reach patients.

On June 26, a committee launched by the French Agency for the Safety of Medicines and Health Products (ANSM) to analyze medical marijuana is scheduled to publish a final report with its findings, TV network Public Senat reported.

Positive signs are already emerging from the committee.

Nicolas Authier, head of the ANSM committee, recently said an “experiment” with medical cannabis in the country could last about two years, “beginning as soon as the health ministry gives the green light,” according to Paris-based TV network France 24.

In late 2018, the committee recommended that cannabis be authorized for use in addition to or as a replacement for existing medicines – but only for certain conditions when the current drugs don’t provide adequate relief, a typical stipulation in European medical cannabis frameworks.

Hélène Moore, managing director of Aurora France – a subsidiary of Alberta, Canada-based Aurora Cannabis – told Marijuana Business Daily that France’s current legislation may need to be amended if the Health Ministry decides to go ahead with the experiment.

Moore said the support of French legislators is an important signal that change is imminent.

“It creates momentum and provides traction for a legislative approval once the Ministry of Health gives the green light,” she said.

Only then would related ministries be able to come up with important regulations supporting the new market, meaning the French market could still be months away from opening.

The estimated patient population in France could be between 300,000 and 1 million patients, according to local experts.

The country is expected to start with imports before initiating a domestic production program, although those details won’t be known until regulations are hammered out.

Alfredo Pascual can be reached at [email protected]