The Napa Valley has become synonymous with wine, as grapevines cover the flatlands and creep up the hillsides.

Last week, a group called the Napa Valley Cannabis Association submitted what they believe are enough signatures to put the question of cannabis cultivation on the March 2020 ballot. Although California legalized marijuana in 2016, Napa — perhaps wary of threatening its lucrative monoculture — has banned pot farming.

That could change, if the cannabis backers, who include some major names in wine, have their way.

“I don’t want to damage the Napa brand for grapes,” said Eric Sklar, a St. Helena resident who grows a small amount of cannabis on a Lake County farm and is a founding member of the cannabis group. “But I’m convinced, and so are a lot of grape growers, that cannabis and grapes can coexist and it will be better for Napa County.”

Opponents say there isn’t room for another cash crop. Grapes represent 99 percent of the county’s agricultural revenue, versus 65 percent in Sonoma, another wine-growing region that’s been far friendlier toward crop growers. The opponents fear that cannabis would contaminate vineyards, strain an already-tight farm labor force and detract from wine sales. The Napa County Farm Bureau voted in May to oppose the initiative, which was then in the signature-gathering phase.

“Cannabis would radically change the mission and vision of the Napa Valley,” said Karen MacNeil, a St. Helena resident and wine consultant who opposes the initiative. “Do we think that Bordeaux would start planting cannabis? No. They’ve worked too hard to become the place they are.”

The cannabis group gathered 8,240 signatures in favor of the initiative, more than the 5,635 needed to qualify. If cleared by the county’s election office, the measure would go to the Napa County Board of Supervisors for review. Those officials would be required to put it on the ballot unless they pass a version themselves.

In the past, the supervisors have approached marijuana cautiously. They placed a temporary ban on commercial cultivation soon after the state legalized pot, and they renewed it last year. As in the rest of the state, it’s legal for residents to grow up to six cannabis plants for personal use.

Only one dispensary exists countywide, in the city of Napa. The measure would permit pot delivery services, distributors and manufacturers to operate in an industrial zone near the Napa Airport.

Would Napa’s wine-growing elite abandon their vineyards for pot plantations? The same conditions that make Napa an ideal place for viticulture — a long growing season with cool nights — also favor cannabis. The association wants to impose standards on any cannabis labeled “Napa Valley,” a quality-assurance measure that borrows from wine’s appellation system.

While Napa commands the highest prices for grapes in the state, potential revenues from cannabis far exceed them. An acre of marijuana grown outdoors can yield roughly $1.9 million of dry cannabis buds, leaves and other usable plant material, according to calculations off data from Cannabis Benchmarks, which tracks the industry, and from the Rand Drug Policy Research Center. Meanwhile, Sklar estimates that an acre of Napa Cabernet Sauvignon grapes can fetch about $55,000.

Importantly, the initiative would limit marijuana growing to one acre per business, whereas some vineyards are hundreds of acres.

And growing cannabis has some costs that don’t apply to vineyards, including security, legal fees, and state and local taxes on growing and selling cannabis, according to Robert Eyler, an economics professor at Sonoma State University.

There isn’t a lot of space to grow pot in Napa. The valley floor has long been planted to capacity. Using the hillsides, which are subject to strict environmental regulation, poses its own challenges. 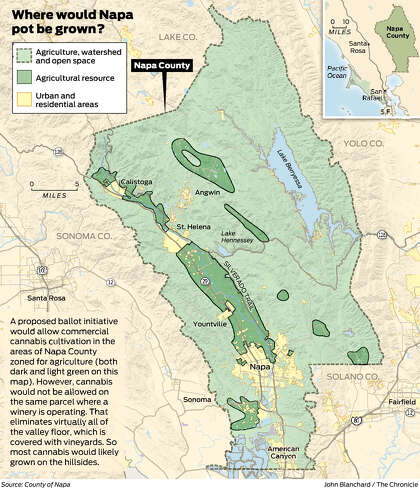 “Pretty much all of the available land has been planted,” MacNeil said. “So that makes me think: Well, are we looking at a situation where 30 years from now, vineyards would be taken out to grow weed?”

Cannabis and grapes are both harvested in the fall, potentially draining already-scarce farm labor. Picking cannabis is often easier physically than the backbreaking work of picking grapes — and might pay better, according to Eyler.

“I think the wine industry and grape growing already competes with (cannabis) to a certain extent,” said Don Munk, vineyard director for Hall Wines in St. Helena. “But legalizing it and making it more widespread would definitely impact the labor supply.”

The proposed initiative would legalize growing commercial cannabis (but not hemp) in areas of Napa County zoned as Agricultural Watershed and Agricultural Preserve — land already determined to be best suited to agriculture — but not on the same lot as a winery. Setbacks of 500 feet for homes and 1,000 feet for schools and parks would be required. The initiative seeks to reduce environmental harms from chemicals or other farming practices.

“Let’s mitigate any guerilla farming that’s going on, and regulate it properly so that there are no pesticides being used to strip a field, and no rogue farmers desiccating wilderness in a way that impacts streams and water,” said Robert Mondavi Jr., president of winemaking at Folio Fine Wine Partners and a backer of the measure.

A handful of illegal grow operations in the county have been discovered and uprooted by law enforcement in recent years. “One year we might turn out 100,000 plants and the next we may pull out only 5,000 total,” said Lt. Rick Greenberg in the special investigations bureau of the county sheriff’s office. “It’s a rollercoaster.”

The initiative would tax cannabis growers, to the order of $1 to $2 per square foot. Other types of cannabis-related businesses in the county (like delivery services) would have to pay an annual tax of 3.5 percent of gross receipts.

In the 2016 election, nearly two-thirds of Napa County voters supported marijuana legalization. Backers of the pro-pot ballot measure say they’ve waited 2½ years after state legalization for the Board of Supervisors to regulate commercial cultivation, before drafting a ballot measure themselves. Supervisor Diane Dillon said the legal cannabis market is not a priority, since the board is grappling with housing issues, fire recovery and construction of a $128 million jail.

The measure faces major opposition in the Napa County Farm Bureau. Its members, mostly grape-growers and vineyard managers, have been showing up to meetings to voice concerns about cannabis coming to Napa County, according to Ryan Klobas, the group’s CEO.

“There are some cross contamination issues with cannabis and vineyards,” said Munk of Hall Wines, a Farm Bureau member. Citing the example of eucalyptus trees, whose oils are known to drift onto nearby vineyards and imbue the resulting wine with a strong eucalypt flavor, he said many grape growers fear “that the odor will create issues with the quality of the grapes, possibly the winery, the wine tasting experience for our visitors.” And if there is an impact, he asked, “who becomes liable for the loss of crop?”

Klobas says the Farm Bureau’s chief concern is the initiative process, which involves “slapping everything down and saying ‘take it or leave it’” — as opposed to a measure from the Board of Supervisors, which would take public comment into account.

The Farm Bureau will decide in the coming months whether to put money behind an opposition campaign, according to Klobas. Spokeswomen for Napa Valley Vintners and Napa Valley Grapegrowers said the groups have not taken a position.

Visit Napa Valley, the county’s tourism bureau, could not be reached for comment Friday. But stakes are high for the tourist industry, the county’s second-biggest employer. Stephanie Honig, president of the cannabis association, says Napa Valley could become a destination for cannabis tourism and appeal to consumers that the wine industry fails to reach.

Munk, the vineyard director in St. Helena, isn’t convinced that cannabis will improve tourism. “What’s going to be the visual effect of the landscape if we’ve got high fences and hoop houses and plastic flying all over the place?” he said.

Correction: An earlier version of this story misspelled the first name of Eric Sklar, and gave an incorrect title for Robert Mondavi Jr. — he is president of winemaking at Folio Fine Wine Partners. It also incorrectly stated that the proposed ballot measure would allow dispensaries to open in unincorporated parts of Napa County, and that marijuana shops would have to pay an annual tax of 3.5 percent of gross receipts. They would not.