Recreational cannabis has been legal in Colorado for several years now and Canada can learn some lessons about regulating the new legal industry. Barbara Brohl, former executive director at the Colorado Department of Revenue, told BNN Bloomberg on Tuesday that the state addressed the social costs of legalizing cannabis and introduced a taxation program that supported education and youth prevention campaigns. “This is an industry that hasn’t paid taxes before so we literally had to bring the program and train the industry to do their work,” Brohl told BNN Bloomberg’s Andrew Bell. Brohl also added that the since 2014, the state has collected US$942 million in tax revenues, which she described as “not quite a windfall”.

Green Growth Brands bought itself a Florida cannabis producer on Tuesday. The Columbus, Ohio-based company said it acquired Spring Oaks Greenhouses, which holds a medical marijuana dispensary license in Florida, for US$54.6 million. Green Growth already operates in Nevada and Massachusetts as well as a nationwide CBD business. The Florida deal also comes as Green Growth decided to end its previously-announced agreement to acquire Arizona-based operator Desert Rose for US$12.4 million in cash. “We have made the strategic decision to turn our focus to Florida, where we believe we can grow our presence and brand recognition across the state at scale,” said Green Growth’s CEO Peter Horvath.

Count Harvest Health & Recreation as another U.S. cannabis company making a big CBD play in the U.S.. The Arizona-based multi-state operator signed a deal with the Asian American Trade Associations Council to distribute is Colors, CBx Essentials and Harvest-branded CBD product lines. The AATAC primary and affiliate members operate many franchises of popular branded retailers including convenience stores and gas stations, which The Brightfield Group estimates will account for nearly half of the $22 billion CBD market in the next three years. Harvest’s line of products are expected to begin arriving in stores across the U.S. later this summer and may expand to 30,000 locations by the end of the year.

Illinois cannabis dispensaries, start your engines. With Illinois a pen stroke away from formally legalizing recreational cannabis, the state’s pot shops are getting ready for the influx of patrons expected to buy legal cannabis in one of the U.S.’s most populous states. The Chicago Tribune reports on how dispensaries are in a rush to renovate their spaces and streamline their processes to serve more customers to be ready by January when recreational cannabis will formally be legal in Illinois. Like many dispensaries in other legal markets such as California and Canada, these shops are looking at technology that can add efficiency and install systems that let customers pre-order their marijuana.

“[Canopy Growth] spent hundreds of millions of dollars learning lessons we don’t have to spend on. That’s a huge advantage over any every other [multi-state operator] in the United States.”
– Acreage Holdings CEO Kevin Murphy in an interview with BNN Bloomberg on one of the reasons why the company decided to strike a deal with Canopy Growth. 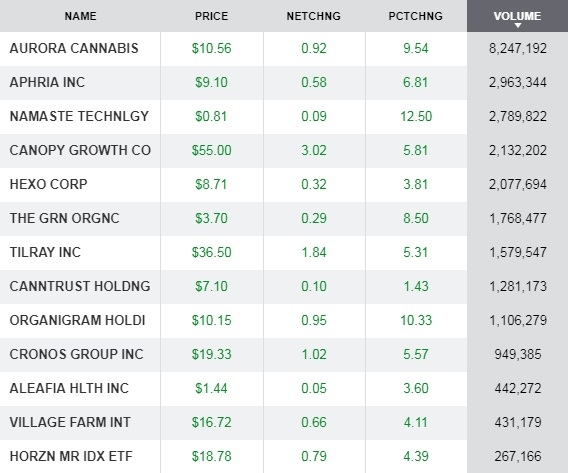