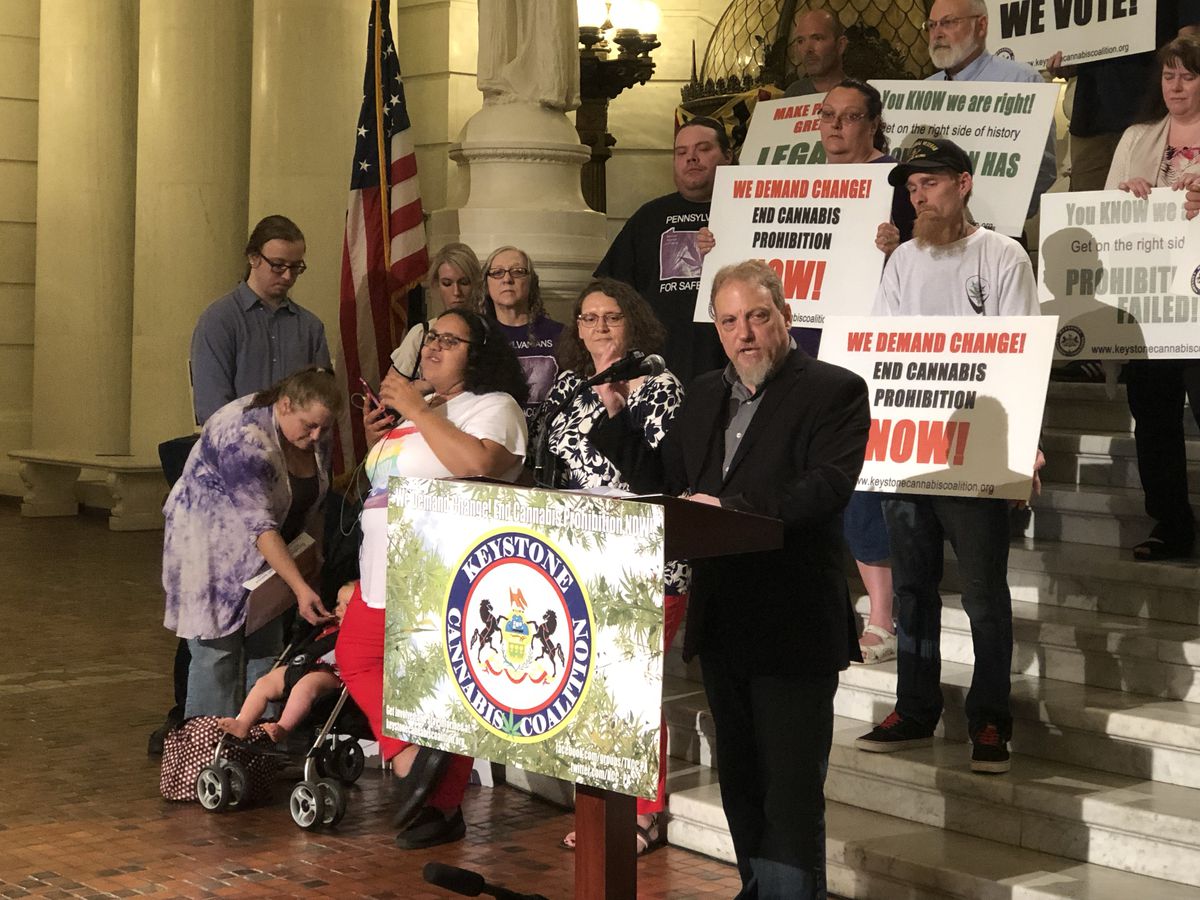 On Friday, Illinois became the 11th state in the nation to legalize recreational marijuana — and on Wednesday, 30 cannabis advocates arrived in Harrisburg to encourage Pennsylvania to do the same.

The group gathered on the steps of the Capitol Rotunda to call for lawmakers to consider legalizing marijuana and allow them to grow their own.

The rally, organized by the Keystone Cannabis Coalition, comes after Lt. Gov. John Fetterman’s statewide listening tour on marijuana use and legalization, which ended last month. Fetterman has yet to release an official report on the feedback he received during the tour, but statewide polls show that majority of Pennsylvanians support legalization.

Efforts to legalize marijuana are ongoing in the state. In several cities, including Harrisburg, Lancaster, York and State College, marijuana possession is already decriminalized for users with small amounts.

Additionally, a bill in the state House of Representatives would legalize recreational marijuana, building off the framework established when medical marijuana was legalized in 2016. The bill’s primary sponsor, Rep. Jake Wheatley, D-Allegheny County, wrote in the bill’s memorandum that it would incentivize cannabis businesses to partner with farmers in the state and would put tax money collected through the sale of marijuana toward student debt forgiveness, after school programs and affordable housing.

“The crafting of this bill was a collaborative effort with cannabis related stakeholder groups that include members of the medical and law enforcement communities,” he wrote. “Pennsylvanians have spoken. They recognize the once ugly stigma of cannabis is now just a part of history and want the commonwealth to move into the future.”

At the rally, supporters touted the benefits of legalization, including the many ways Pennsylvania could use money collected through marijuana taxes and saved on incarceration. Les Stark, executive director of the Keystone Cannabis Coalition, said roughly 10 percent of the population regularly uses marijuana and the current ban is not stopping anyone from lighting up — just making it more difficult and less safe to find marijuana.

“Any fool can see that the strategy of prohibition is doomed to failure on paper and in real life,” he said. “It’s not only wrong, cruel and immoral, but blatantly stupid as well.”

Stark said he sees legalization as an issue of personal liberty.

“It is my right to grow my own cannabis and to use cannabis in a free and responsible way,” he said. “It is a right that belongs to us all, enshrined in the words ‘life, liberty and the pursuit of happiness.’”

Despite the public support, the Republican-controlled state Senate and House have been strongly opposed to implementing a legalization plan. After Gov. Tom Wolf called for the state to explore the possibility of lifting bans on marijuana last year, Senate Majority Leader Jake Corman, R-Centre County, said legalization would be “reckless and irresponsible.”

In recent months, legislation to legalize marijuana in neighboring New York and New Jersey has collapsed after the bills failed to get support in the states’ general assemblies.

Opponents caution that there are implications to the legalization of recreational marijuana, including an increased risk of people driving while high. Some also argue that marijuana use can lead to mental illness and drug addiction, although supporters say marijuana can help users manage these conditions.

Dan Bartkowiak, communications director for the Pennsylvania Family Institute, said his organization, which is against legalization, primarily worries about the influence marijuana usage could have on children and adolescents, who could be exposed to marijuana marketing and second-hand smoke from users. He also has concerns about the lack of long-term research on marijuana’s impacts.

“When you start to analyze the issue, I think that going full-on Colorado is very problematic,” he said. “There’s much we don’t know about marijuana. We don’t know a lot of the impacts of this, and some of the science shows potential harm.”

Nevertheless, advocates are determined to get legalization passed, even though Stark acknowledged that it may be a long battle to do so.

“I served in the United States Marine Corps, and I fought for freedom,” Stark said. “And every person you see here today is fighting for the same thing — freedom. And freedom will always find a way.”