When people think of marijuana and food, the first thing that comes to mind is usually sweet, like a pot brownie. But many Massachusetts residents are craving something a little more savory.

At an annual cannabis expo in Northampton called Extravaganja, several attendees imagined what foods they would infuse with weed if they could. A young woman eating chicken fingers said fried chicken would make her happy. Another woman wanted a steak.

By far the most popular pick was weed-dosed mac and cheese. That made sense to Annie Wolf, the infusions manager at Sira Naturals in Milford. 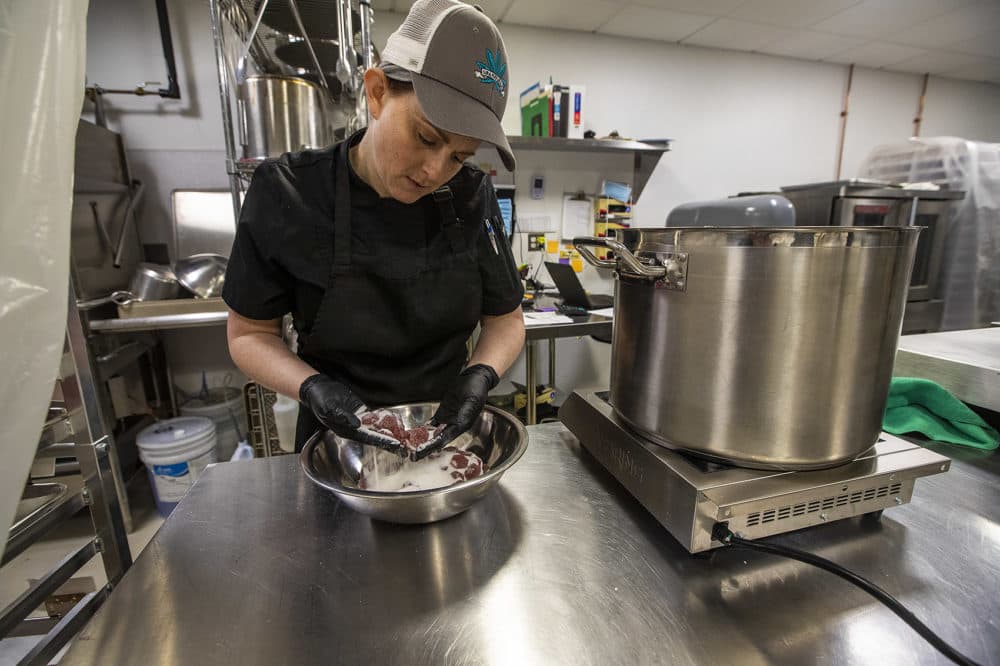 „Mac and cheese would be killer. It’s fatty and unctuous and flavorful, and I’m into that,” she said. While Wolf is a chocolatier, she’s also a chef whose training specialized in savory cuisine. She’s been experimenting with marijuana-infused foods while keeping in mind that state regulations here are still evolving.

„There’s opportunity to kind of pave the way and learn about the rules, play by the rules and master this new industry,” she added.

Current rules dictate how people like Wolf can innovate. Massachusetts limits an individual serving size to 5 milligrams of THC. Sweets are easy to divide into servings that fit the regulation, so that’s what companies like Sira are mainly producing.

„One corner of my batch of chocolate needs to be the same dosing and potency as the very end other corner of that same batch,” Wolf explained.

Right now, Wolf is working on a milk chocolate bar with marijuana in it. She said she hopes to eventually make a filled truffle or bonbon that could be sold in a special gift box. She isn’t yet working on developing a more savory food because those are harder to regulate.

„A jar of tomato sauce is going to be challenged [by regulators],” she said. „There’s opportunity for misunderstandings.”

Despite the challenges, some private chefs in Massachusetts have been trying to do more with pot food beyond brownies and chocolates.

Take David Ferragamo, the owner of Euphoric Food in Haverhill. His small company puts on marijuana dinner parties mostly out of the comfort of peoples’ homes.

„I’m doing a very intimate setting, like I get to know all the diners,” he said. „People are eating up to 12 courses with drinks.”

Inside a kitchen in Haverhill, Ferragamo cooked us a five-course meal to demonstrate how the dinners typically run. Shortly before each course was served, he added CBD oil to every individual plate using a measured dropper. We used CBD because it’s a non-intoxicating cannabinoid found in marijuana, but THC is added in the same way. The dropper ensures proper dosing. That way, patrons need not worry about getting too high. Both the CBD and THC oils are light. Diners don’t even really taste them. 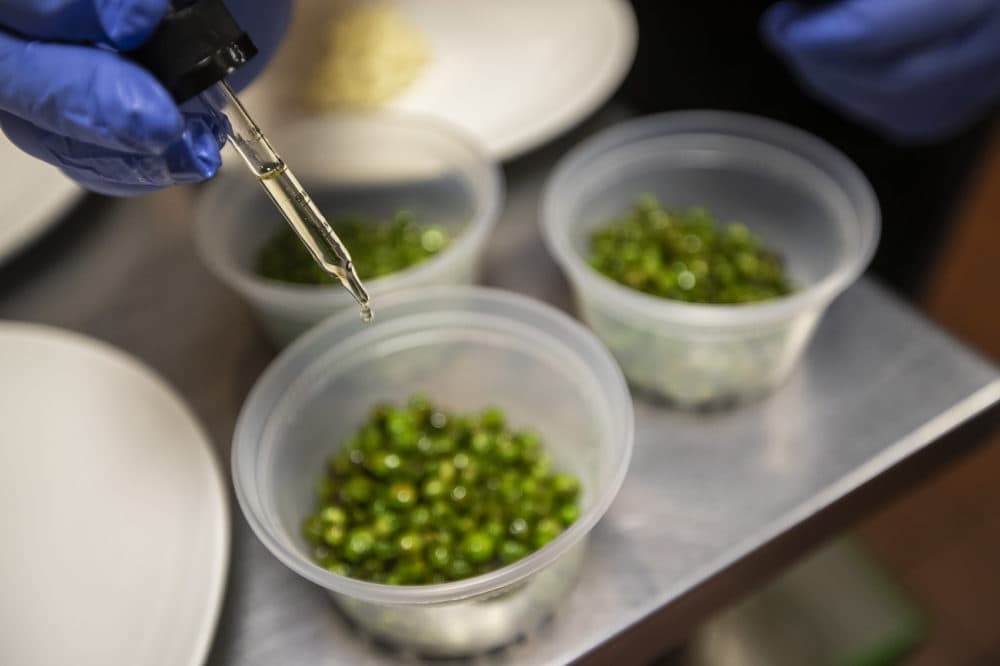 Throughout the meal, Ferragamo showed different ways to infuse the plates. The hors d’oeuvres were local cheese curds and cheddar marinated in thyme, juniper and orange. They were served on top of Canada mayflower, which looked a little like spinach. Ferragamo added the CBD oil to the cheese before it was plated.

The first course was a caramelized onion potato soup with two different kinds of mushrooms. The CBD was in a sherry butter that Ferragamo added to the bowls before he poured in the hot liquid. The infusion melted into the entire dish.

The third course was lamb chops glazed with fermented blueberries and served with peas and celery root. Before plating, Ferragamo split the peas into individual servings in small bowls and tossed them with the appropriate amount of CBD for each diner. 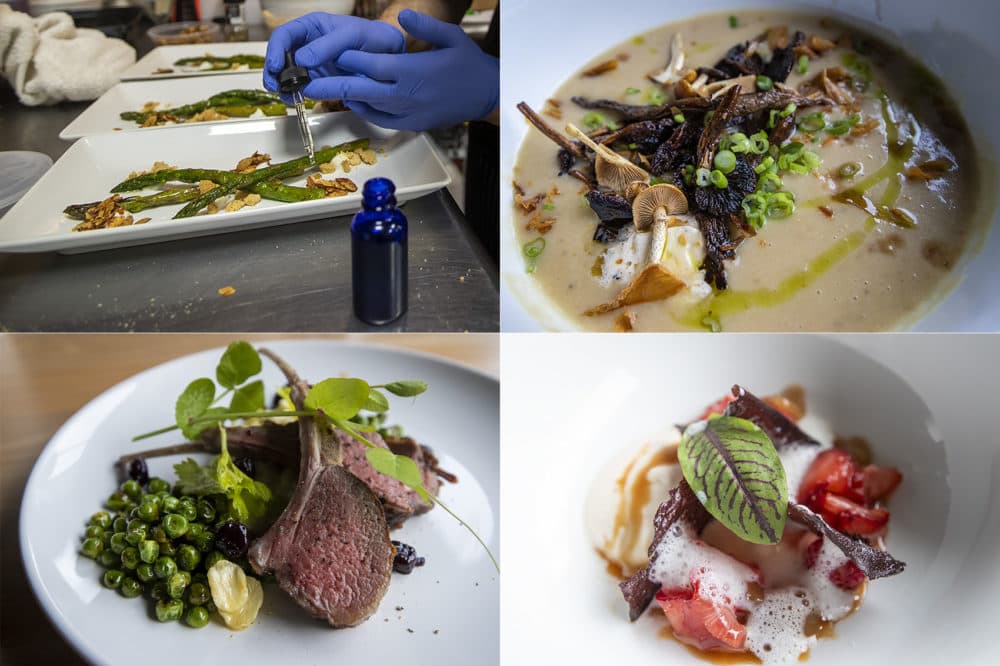 Ferragamo is not licensed by the state to actually sell the drug, so he’s doing business in kind of a legal gray area. Diners provide their own marijuana, or it’s donated by a private company. If a dinner is sponsored, the company’s name appears on menus and in any marketing materials.

„You just gotta make sure you’re just taking every precaution that you can,” he said. „People are never directly paying for THC.”

Euphoric Food is one of a handful of companies putting on private marijuana dinners in Massachusetts. Ferragamo said, for now, he does not expect to see many more opening up.

„You know, that’s like the one thing they don’t teach you in culinary school, is no one wants to be an off-site caterer. Who wants that job?” he said. „You know, you gotta transport everything. God forbid you forget the salt. There’s a lot that can go wrong.” 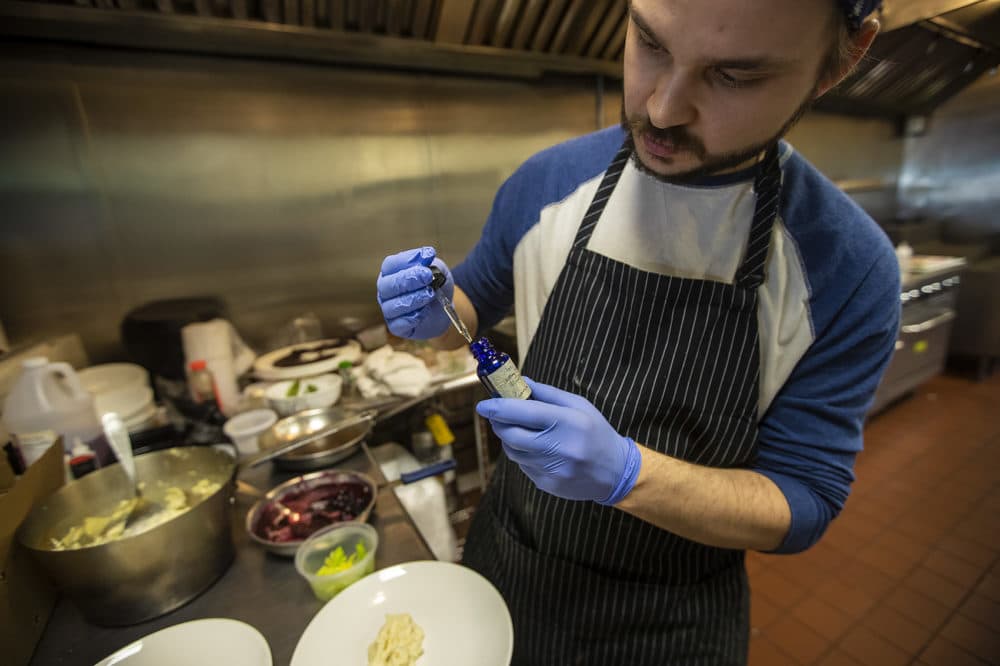 Ferragamo hopes to one day open a THC-infusions restaurant in Massachusetts. He’s banking on regulators here following the lead of other states with older legal pot industries when it comes to allowing for so-called „social consumption sites.”

The Likely Coming Of Cannabis Restaurants

Pot eateries are already popping up in California. One chef there, Andrea Drummer, is on the brink of opening her own shop in West Hollywood.

Trained at the internationally-renowned culinary school Le Cordon Bleu, Drummer started cooking with cannabis in 2012 because long hours in the kitchen were making her physically ill.

„I found myself with different ailments and some issues with my sciatic nerve, pain in my arms,” she explained. „I was prescribed different medications — opioids and the like — that I wasn’t interested in taking.”

Instead of opioids, Drummer turned to infused foods and found they helped her pain. She later began using her culinary skills to challenge what people thought could be a pot edible. In those early days, she found interest was limited.

„There were days when I thought of stopping,” she said. „I mean, they were few and far between, but there were days it was a challenge to get people to understand that the edibles industry is evolving tremendously to suit the average consumer.”

It’s been close to a decade now, and Drummer has gotten that message out on national platforms like Marie Claire, Vogue, and Forbes. More recently, she was featured on the Netflix competition cooking show, „Cooking on High.” She’s also the food editor for the website cannabisMD.

„Being able to continue that educational component and debunk the myths of cannabis and CBD — and exploring different ways to medicate and to incorporate it into a cohesive dietary plan — just to be able to give that to the audience is so important.”

Drummer’s soon-to-open restaurant will be among the first eateries in California to serve marijuana-infused food, more than two years after voters there legalized recreational use of the drug.

She believes the next generation of pot professionals will help change public perceptions about eating marijuana infused dishes.

„Chefs are getting in on it and using their vast experience to help move the agenda and to make it where one day, I believe that we’ll have a culinary school specific to infusion and how to infuse cuisine.

Drummer said she’s already in the process of speaking to schools about starting those classes, and many have been receptive. So maybe, a future with pot-infused fried chicken or steak you can order in a restaurant isn’t that far away.