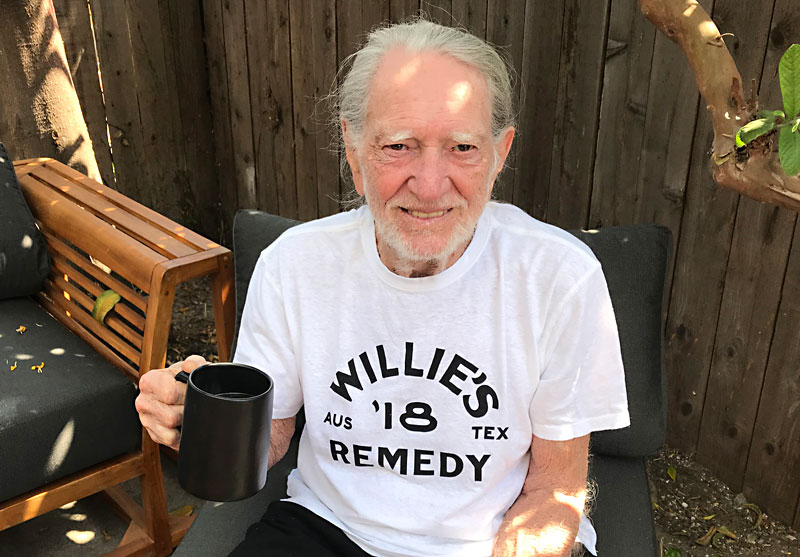 If the recent tidal wave of cannabis chatter has you mumbling Harry Nilsson lyrics – everybody’s talkin' at you – you’re not alone. The federal Farm Bill legalizing hemp production was signed into law in January 2019; last month, the 86th Texas Legislature legalized the cultivation/production of industrial hemp and passed a legit, albeit heavily restricted, medical marijuana program. So while it’s almost all very good news for Texans, the information deluge has floated some pretty fundamental questions to the surface: What’s the difference between CBD (cannabidiol) and THC (tetrahydrocannabinol)? What is a full spectrum hemp extract? We spoke with two industry leaders with Austin roots – Canvas 1839 and Willie’s Reserve/Remedy – to help us sift through the debris.

„I think there is confusion about what products contain, and not even just around differences between THC and CBD, and whether this will affect me and in which way, but also at the basic level – what’s a hemp extract, what’s in it? You can go to Whole Foods and find hemp seed extract or hemp oil, and it doesn’t have much, if any, CBD at all. It’s just an oil, like grapeseed oil, with no CBD,” says Kyle Hammerick, Ph.D., of local CBD purveyors Canvas 1839.

If we start at the molecular level, it’s actually pretty simple to differentiate between the two, but first: Hemp varieties of the cannabis plant contain LESS than 0.3% THC; marijuana varieties contain MORE than 0.3% THC. The human body’s natural endocannabinoid system attracts two molecules found in the marijuana plant – CBD (legal) and THC (not legal in Texas or federally). Though they are very similar in molecular size and weight, because of their different shapes they are attracted to different receptors, thereby affecting the body differently. In short, THC induces a physiological high and CBD simply cannot. „THC generally engages CB1 receptors, and those receptors are heavily present in brain tissue. That’s why when we get THC going through the system, it circulates and makes its way to the brain, docks on those CB1 receptors, and causes the psychotropic sensory effects that most of us are aware of at some level. Alternatively, CBD doesn’t engage with the CB1 receptors,” explains Hammerick.

While there is still some question about exactly which receptors CBD does occupy, evidence suggests it favors immune system receptors and some others in the skin, liver, bones, and other tissues, explains Ham­mer­ick. „Obviously the mechanism of action isn’t fully worked out, but you see a scenario where a CBD molecule could reduce inflammation in the brain and reduce [many other] symptoms. More science is needed across the board, for sure.”

Funding for that research has been scant, but the new legislation is promising. Passing the Farm Bill will open up more avenues „to do research on at least CBD at this point, and then ultimately you’ll see more research coming out about THC that will change the regulatory scheduling,” says Hammerick.

Because of federal regulations, a fully or partially federally funded institute like a major university could run afoul of the Feds if they’re not doing sanctioned research and deriving those cannabis compounds from federally approved resources. Big money corporations don’t have incentive to fund plant-based products. „It just creates an environment with limited access; it’s difficult, there is a lot of red tape. It creates an overall environment where it’s difficult to do the research … especially for molecules like CBD and THC where there’s not a Pfizer or Roche – [they’re] interested in a molecule they can patent, in new molecular discovery. They don’t pay as much attention to existing molecules like THC and CBD that come from plants because they don’t have the allowance, necessarily, to patent that molecule. They could patent a formulation of it, but not the molecule itself, so there’s not as much upside for them on the basic research side.”

Elizabeth Hogan, co-founder (with Willie Nelson and his wife Annie) of Willie’s Rem­edy (CBD) and Reserve (THC) products, says another large part of the cannabinoid conversation involves source-chain transparency and quality control. „We want to put a flag out there for people who are looking to add more cannabis to their lives or are looking to try it again, and we all know what Willie’s standards are. He is just consistent. What he says he stands for, he stands for. He hasn’t changed his tune at all.

„Sourcing is everything. It’s not exact – you have to stay tuned and stay nimble about sourcing. We learned so much trying to get Willie’s Reserve to market in all these different states with a level of consistency and excellence fitting for Willie Nelson. Willie is the ultimate attractor of 'high quality shit,' as he’d say, so there’s lots to choose from. But when we started to look at the hemp side, we found it was very different – it’s a very muddled marketplace because it’s not regulated in the same way,” Hogan adds.

Part of the quality question involves products being „full spectrum” or not, and while extraction technology is nothing new (that’s how you get decaf coffee beans – extract the caffeine and what’s left over is decaf beans), not all CBD products are created equal. Extraction technology isolates compounds which can then can be refined repeatedly through distillation, altering the compounds. Crude full spectrum extract has not been heavily processed or refined; it’s just the compounds directly extracted from the hemp plant.

„The science is still out on what is and isn’t necessary for certain conditions, but with that still outstanding, Canvas 1839 is taking the perspective [that] it is probably important to have the holistic effect of the plant, at least in the tincture, so we made sure ours uses whole hemp extract that’s been bumped up with CBD, utilizing a lot of the compounds in the hemp plant,” says Hammerick. 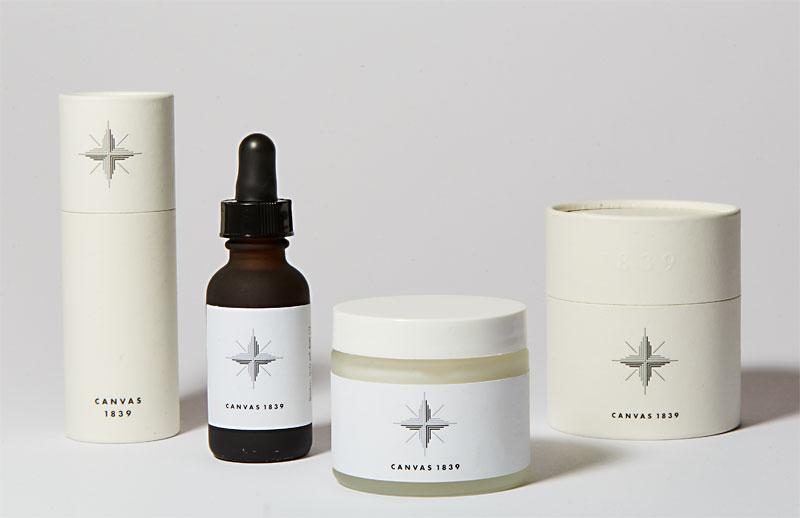 Hogan agrees. „I’m not here to push down anyone’s cannabinoids – I want all of the cannabinoids that we can get in the universe to exist in the universe – but when it comes to therapeutic use and high doses and people who are really looking for effectiveness, not just supplementing natural cannabinoids found in the body, all the evidence so far points to the benefits of a full plant extract.”

The gold rush of companies trying to get their products to market means there is much confusion in Food and Drug Assoc­ia­tion regulations and warnings issued about basic regulatory checkpoints like batch records. Hammerick says, „These are fundamental things in pharmaceuticals, but you don’t see that in the Wild West that has become the CBD and, to some extent in certain jurisdictions, THC markets. You don’t see that attention to detail, attention to quality, and that’s one thing we like to stress. These products are safe, and we’re going out of our way to make sure proper controls are in place. There aren’t heavy metals in the hemp we’re deriving, and it’s from a known source – not Chinese hemp that’s been rerouted through Eastern Europe and might be contaminated.”

Both Canvas 1839 and Willie’s Remedy have only a few SKUs, rolling out products slowly. Can­vas 1839 offers a pharmaceutical grade topical Relief Cream designed for better skin penetration with a relatively high amount of CBD (500mg in a 2-ounce container), as well as Relief Oil, a 300mg per ounce sublingual tincture with MCT oil carriers. While Willie’s Reserve is not available in Texas, we’re still allowed the Remedy line. „The [CBD-infused] coffee is very much supposed to be included in the daily routine – [it’s] so fantastic because it’s plants working together. Part of the magic here is [that] there’s nothing other than hemp oil extract and coffee beans in this product. When coffee is roasted, the oils inside the bean naturally ooze out and are then reabsorbed into the bean when it returns to room temperature; so when we add hemp-derived CBD oil, it’s reabsorbed back into the bean with the coffee oil, prolonging the freshness of the bean. It’s a perfect delivery system for that oil, and the product itself is delightful: It’s all of the 'up' and awareness and energy you feel with coffee, but none of the anxiety.”

Remedy also has a tincture with full spectrum hemp oil in coconut-derived MCT oil. The canary himself will be in Austin for his annual 4th of July Picnic, and Remedy will officially announce their new non-caffeinated, CBD-infused herbal tea. Hogan says, „I think there are a lot of ways his life, lifestyle, and how he approaches every moment can be an example for a lot of people. And there is no question that using cannabis, smoking cannabis, vaping cannabis, according to Willie, has really contributed to his rich life.”

Hogan adds, „We’re hopeful. Texas is a leader in the national conversation and for all of us – Willie has roots in Texas, I’m from Texas. So we want to do all we can to bring focus to the issue. It’s important that the Texas Senate and the governor are listening, because this is clearly what the Texas people want.”