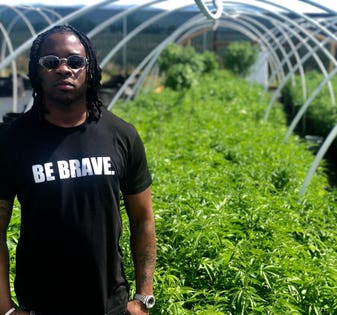 The phone rang the other day. I didn’t recognize the number, but something told me just to answer it. On the other end was Cleveland Jones. He introduced himself to me in an almost apologetic manner. Would I mind if he gave me his elevator pitch. First of all, most of my pitches are self-generated. I don’t usually accept pitches, and when I do, they are on email. But this was different. I felt a kinship immediately and trust. I wanted to do this piece because I felt this person was on a path to entrepreneurial success. He was unafraid of calling someone out of the blue. The simple act that he picked up the phone, instead of sending an email. That takes guts. Cleveland obviously speaks with a smile, because the smile is what you will feel after you finish reading about him. Cleveland is both intriguing and he’s on a path to success. I’m proud to introduce him to you. Cheers!

WB=Warren Bobrow Where are you from?

CJ=Cleveland Jones: Let me begin by giving a quick introduction of myself. I’m originally from East Houma, Louisiana approximately 45 miles outside of New Orleans, Louisiana. I am from the bloodline of the Rockward & Jones lineage.

CJ: Legalization of cannabis is one of the most talked about subjects across America. The U.S. cannabis projection of $23.4 billion in annual sales by 2022, has drawn the attention of future investors, brand ambassadors and lovers of cannabis. Cannabis is an amazing plant, which has the ability to create an impact on the lives of people. In other words, it can heavily contribute to the quality of life in many aspects. On the other hand, it is also possible to use cannabis for a variety of medical purposes.

WB: When did you first discover the plant?

CJ: I have been researching and spending quite a bit of time with cannabis during the past years. Therefore, I have gained a deeper understanding of the plant as well as the usage that comes along with it. I first discovered the cannabis plant when I was 13. During my younger days, I suffered from severe migraines, resulting in time lost from school and other activities throughout my childhood. My parents, searching for answers and a cure scheduled visits to have me diagnosed by a neurologist, which prescribed me with prescription medication. However, the medicine prescribed did not deliver any positive results. In fact, prescription medicine caused my condition to worsen. I’ve suffered years of pain and time lost from school while being prescribed several different medications over the years throughout my teens. After being fed up with doctor visits and medicines doctors were prescribing that didn’t work, I started looking for a natural remedy on my own at the age of 21. While spending time researching to find an alternative method to get rid of migraines, I came across the amazing healing properties of the cannabis plant. It didn’t take a long time for me to get acquainted with the amazing healing properties offered by the plant. Since then, I have been using the cannabis plant on a regular as needed basis. It didn’t just help me to overcome the migraines that I have been experiencing. In addition, I got the opportunity to improve the spiritual and social aspects of my life as well.

WB: Tell me about what you do?

CJ: I’m Head of the Celebrity Brand Ambassadors for Mammoth Labs. At Mammoth Labs, we build and operate state of the art extraction and processing facilities across the country. Our lab director, Connor Jackson graduated with a chemist degree in 2016 and brings to Mammoth Labs nine years of experience and knowledge. I am able to take advantage of his first-hand knowledge of the extraction process and working with cannabis. At Mammoth Labs, we pride ourselves on creating top of the line products which are high in demand throughout the states where legal cannabis can be consumed and purchased. Even though I have been working as a professional sports manager and serial entrepreneur, the passion I have for the legal cannabis industry made me venture into opportunities that were available.

WB: How does a fantastic brand ambassador work to further a cannabis company?

CJ: As mentioned earlier, I was exposed to some lucrative opportunities in the cannabis industry by George of Mammoth Labs. I decided to go ahead and grab my hands on those opportunities without thinking twice. In fact, working as the brand ambassador to Mammoth Labs helped me to locate strategic partners for the brand. I was introduced to an investment opportunity, where I could go out and penetrate the local markets for Mammoth Labs. With the passion that I had, I was able to execute the new opportunity without any frustration. It helped me to receive outstanding results within a short period of time. I’m a person who works according to executing a plan. In fact, I strongly believe that working according to a plan of execution can help anyone achieve results that one sets for themselves in a promptly manner.

WB: What is your six month and one-year plans for your company?

CJ: I have defined both six months as well as one-year plans for Mammoth Labs. During the upcoming year, I’m looking forward to playing my position and role to expand to 3 to 4 additional states as a part of the Mammoth Labs plan of execution. It will help me to take my business initiatives to the next level in which I strive.

WB: How do you fight stigmas against cannabis use?

CJ: As a cannabis connoisseur, I’m fighting against all the stigmas that exist against cannabis use. I’m spending a considerable amount of time on it. It has helped me to receive positive results which drive me forward. As working as an advocate in the real world, I’m able to share articles that represent the legalization of cannabis and the positive effects that come along with it via social media. I’m capable of educating while creating a strong impact on the people who follow me on social media. I invite those who are skeptics to events, such as CannaTank420 Expo. During these events, individuals will be able to take part in open seminars and discussions, where they will be presented with more information about cannabis from professional guest speakers in the likes of Doctors, CEOs, etc. Some of the topics that are often discussed in the forums include cooking with cannabis, opioid addiction and cannabis, the future of cannabis in the medicine industry and the way how cannabis is contributing to the economy to name a few. I love to take part in these discussions along with skeptics to see how they transform. Dennis Turner owner of CannaTank420 Expo and I have been working very closely over the years to bring forth the structure of entertainment and comedy to Cannatank420 Expo Spokane, Washington which recently included cast members of MTV’s Wild n Out which resulted in an amazing turn out on April 6 & 7th of 2019. We are currently in the works of locking in and expanding the entertainment piece of Cannatank420 Expo to Denver, Colorado September 14th &15th of this year. More information regarding Cannatank420 can be found on their website www.cannatank420.com

WB: Where do you see cannabis as a medicine?

CJ: On the other hand, I love educating people about the history, Industry and the cost that is linked with cannabis. With the experiments, I have conducted with cannabis and out of the discussions I took part in, I was able to learn a lot about the medicinal benefits that are attached to cannabis. In fact, cannabis contains both THC and CBD, which come along with specific terpenes. This can reduce the opioid addiction that a person may have. On the other hand, it can provide excellent assistance as a replacement for prescription sleep aids. Moreover, inflammation caused by health conditions can easily be eliminated by the usage of cannabis. I have the first-hand experience as I have been spending a lot of time with cannabis during the past. I’m glad to see how Colorado is working on a new law, which will allow doctors to prescribe cannabis in place of opioids. I’m impressed to see how business professionals and everyday people from all walks of life are openly embracing cannabis. This can heavily contribute and influence other to the success of the cannabis industry.

WB:  Do you cook? What is a favorite recipe from your childhood? Style of food?

CJ: I love cooking especially experimenting with cannabis. In fact, I have been using some of my favorite meals from my childhood and have creatively created some amazing recipes. It’s amazing to see how cannabis can be used supplemented and used as an ingredient. I’ve come up with many different recipes such as barbecue sauces, hash yogurt, ice creams etc. I have been preparing a large number of recipes for family and friends as well. The most favorite recipe out of them is Battered catfish and Gulf shrimp over grits topped with cheese sauce (the secret is found in the cheese sauce). I also prefer to make Thai and Cajun style food with cannabis as well.

I’m impressed to see how business professionals and everyday people from all walks of life are openly embracing cannabis. This can heavily contribute and influence other to the success of the cannabis industry in the future as well.

WB: If you were to travel anywhere in the world right now where would that be? With whom? Doing what?

CJ: If I were to travel anywhere in the world, It would probably be home (Louisiana). I have spent enough time exploring the ways individuals use and misuse time to know being with my family is more important than going to the most luxurious escape. My wife and I Angelina (Fly As Bae) have three daughters together ages 11, 12 and 13 for me family comes first above all measures. My family and friends are more rewarding than any traveling experience I could have. We are a lively group of people and we enjoy each other’s laughter, good food & music as well as each other’s company.

Names in the industry I am referred to are: