The Louisiana House today voted 82-0 to allow medical marijuana patients to inhale cannabis, sending the bill to the governor’s desk for final approval.

The legislation, sponsored by Rep. Ted James, D-Baton Rouge, does not allow smoking, but patients can inhale medical marijuana through a device similar to an asthma inhaler.

The bill initially stalled in the Senate as lawmakers sought to expand the number of licenses to prescribe medical cannabis, but legislators revived the measure after including “metered-dose inhaler” in the definition of acceptable devices.

In order to legally receive medical marijuana, patients must have “debilitating medical conditions,” such as cancer, epilepsy, Parkinson’s disease, intractable pain and/or HIV.

No medical cannabis has been delivered to patients yet because of an ongoing feud between the state’s agriculture commissioner, Mike Strain, and the LSU AgCenter over a dispute about growing methods. Therapeutic marijuana is expected to be available later this year.

Other efforts to update the state’s cannabis laws were successfully passed during this legislative session.

The Louisiana Senate Saturday approved heavily amended legislation that would legalize the growing of industrial hemp, a cousin of marijuana u…

House lawmakers on Monday unanimously supported a bill to legalize industrial hemp and allow the growth and sale of certain CBD products in Louisiana.

The proposal, sponsored by Rep. Clay Schexnayder, R-Gonzales, was sent to the governor’s desk for review and approval. Gov. John Bel Edwards, a Democrat running for re-election in the fall, has said he is supportive of hemp regulation in Louisiana.

The Senate’s Agricultural Committee added a number of amendments to Schexnayder’s bill before the Senate approved the proposal in a 34-2 vote.

Hemp and marijuana come from the same plant species, but hemp contains nearly no TCH or psychoactive properties. Hemp is the fiber of the cannabis plant, and is a multi-use material that can be used to make rope, fabric and paper products.

CBD is derived from hemp, and is used to manage pain, anxiety and even epilepsy. Retailers selling CBD products have opened in Lafayette, New Orleans and Mandeville. 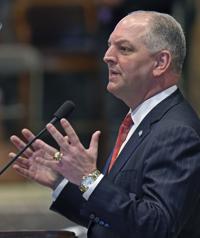 Louisiana won’t be legalizing recreational marijuana, abolishing the death penalty, or changing the sales tax rate, with those bills among the…