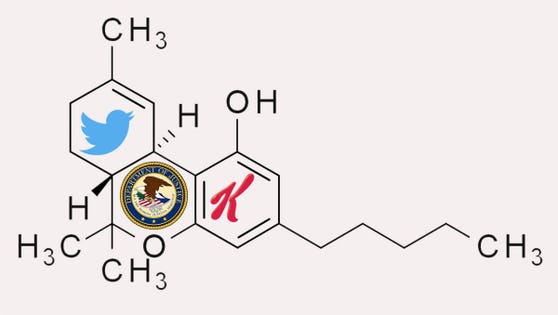 The mass migration from the corporate world and government agencies into the cannabis industry continues, and even seems to have been accelerating in recent weeks.

Only a few days ago, we learned Jackie Cornell was leaving her position as the Principal Deputy Commissioner at the New Jersey Department of Health to take a job at Colorado edibles brand, 1906. She was just the latest in a series of high level executives and former government officials joining the cannabis industry – many others listed below.

This week, we saw two other big migrations stories.

One of the big stories in the migration saga this week was that of Paul Norman, who last served in the position of President of Kellogg North America, a business with an estimated value of $9 billion. After leaving the foods company, Norman was appointed as CEO and chairman of Heavenly Rx, a company that’s part of the portfolio of publicly traded SOL Global Investments (OTC: SOLCF) (CSE: SOL).

The company also appointed Mike Beedles as Chief Operating Officer and Chief Technology Officer. Mr. Beedles most recently occupied top tier positions at a series of companies under the SATO Holdings umbrella, a company that trades on the Tokyo Stock Exchange (TSE) with a market cap close to $1 billion.

When asked about the mass migration of executives from established companies into the cannabis industry, Normal said, “The global wellness industry is growing exponentially, thanks to how people define and seek well-being today versus in the past. Within the wellness space, plant-based nutrition and remedies are growing most rapidly. The hemp CBD trend fits perfectly in this movement for more natural wellness solutions in peoples busy lives.”

In his view, rapidly evolving consumer behaviors and attitudes towards CBD products, will mean that “many of the keys to successful growth in the coming few years will come from the skill set of CPG leaders: skills like brand building, consumer and shopper insights and supply chain capability.”

Life After The Cole Memo

The other big migration story involved John Vardaman, a former senior official at the Department of Justice and Department of Treasury.

Earlier this week, Vardaman was appointed Chief Compliance Officer and General Counsel at regulatory compliance software provider Simplifya. Prior to joining the company, however, the banking regulation expert had worked as General Counsel at cannabis banking and payments company Hypur.

During an exclusive chat, Vardaman explained his initial involvement with the cannabis industry began in 2014, while employed as a senior official in the Money Laundering Section of the Department of Justice. At the time, he was tasked with drafting guidance concerning the banking of marijuana businesses.

“That document, known as the Cole Memo, set forth a roadmap for how financial institutions could permissibly service marijuana businesses in states where it had been legalized,” he said.

“The fact that this was occurring while marijuana remains illegal under federal law created unique legal and compliance challenges, but also a tremendous opportunity for businesses capable of navigating an evolving legal landscape.”

For me as an attorney, the marijuana industry represented a once in a lifetime professional opportunity that I could not resist.”

Vardaman then went into cannabis’ unique legal status, which forces the industry to face regulatory burdens that make compliance equally essential and challenging.   “Compliance can be a time and resource drain that can potentially stifle the very innovation that has propelled the U.S. cannabis market to multi-billion dollar levels. Having been involved in regulatory enforcement from my time at the DOJ, I know firsthand the legal and financial risks that can result from insufficient compliance practices.”

He will now apply this knowledge to his role at Simplifya.

As mentioned in the introduction of this article, these two are just the latest chapters in a movement I’ve called the migration saga. Before Vardaman, Norman, and Cornell, many other big name corporate executives and government officials had also joined the ranks in cannabis companies.

Some notable appointments included those of:

When presented with this information, Karson Humiston, founder and CEO of cannabis staffing giant Vangst explained there are currently more than 290,000 people employed full time in the cannabis industry – and this number is expected to double over the next few years.

“We have seen senior-level executives from major CPG, Fortune 500 companies, and the highest level of government join the ranks at cannabis companies over the last few years. With almost 65 percent of Americans now supporting legalization, the stigma of cannabis being reduced by increased legalization efforts, coupled with this booming job sector, seasoned C-suite executives and high level government officials are gaining the confidence to join the cannabis industry.”

Humiston believes an increasing number of people are beginning to see the potential of the cannabis space, realizing they can use their skills sets and experience from previous endeavors, and apply them to a new industry.

Keep tuned in for the latest news out of this migration saga.