In May, Arkansas became the latest state to cash in on the sale of medical marijuana. Lines of people wrapped around a newly opened dispensary, drawing in customers from all four corners of the Southern U.S. state.

“I see them standing outside the window with a big smile on their face,” said Bud Watkins, manager of Doctor’s Orders RX in Hot Springs. “They love it.”

In the first week of business, Arkansan dispensaries sold more than 22.6 kg (50 pounds) of cannabis in nearly 5,000 transactions.

According to Marijuana Business Daily, that revenue will contribute to a growing national market of retail medical and recreational cannabis that is expected to eclipse $12 billion in sales by the end of 2019. 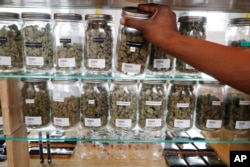 FILE – A clerk reaches for a container of marijuana buds for a customer at Utopia Gardens, a medical marijuana dispensary, in Detroit, Oct. 2, 2018.

Passed in the 2016 general election by popular vote, the Arkansas Medical Marijuana Amendment made the state one of only a few in the South to allow legal purchase of the drug. It joined, however, a majority of U.S. states that had passed similar legislation.

While business is doing well, managing the money is difficult. Despite more states coming on board, plant-touching businesses are still operating as mostly cash-only enterprises.

“The vast majority of the businesses that touch the plant have a very difficult time finding banking partners,” said Sal Barnes, a director at Marijuana Policy Group. “The majority of those that do (bank) are going to be through credit unions and state banks, especially in California and Colorado, where we have what we like to call an adult-use market, and that is essentially just a glorified checking account.” 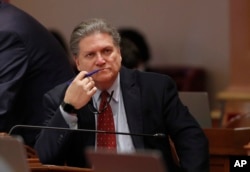 The California Senate approved SB51, May 21, 2019, that would create special banks to handle money from legal marijuana retailers. California state Sen. Bob Hertzberg, sponsored the bill, which went to the Assembly for consideration.

Since 1970, cannabis has been officially outlawed at a federal level for any use, including medical. This means that federally insured banks operate under prohibitive restrictions about doing any business with any plant-touching businesses, which affects everyone along the supply chain, from the growth of the plant to the production or sale of a cannabis gummy.

In spite of this, states have increasingly passed legislation to allow for the legal purchase, putting them at odds with the federal government.

“The industry is hindered. Right now, the current as-is method is not safe. You literally have companies hiring ex-Marines to guard their cash, and that just doesn’t fly,” Barnes said.

Not having access to banking services means that cannabis businesses must pay for everything in cash, from salaries to taxes. And, because the cash is usually stored on-site, robberies are very common.

“We have one of the most secure buildings in the state,” said Watkins, who didn’t want to go into too many details.

Marijuana in the mainstream

There is also bipartisan traction in Congress. In March, a U.S. House of Representatives committee passed the Secure and Fair Enforcement Banking Act of 2019, more commonly known as the SAFE Banking Act. It would provide legal protection from persecution for banks and federally regulated creditors that do business with state-legal cannabis businesses.

“After careful consideration and speaking with members of the banking industry, as well as our state regulatory authority, the attorney general felt that it was important for the office to support the SAFE Banking Act to help minimize fraud, tax evasion and money laundering that arises from cash only businesses,” said Rutledge’s office in an emailed statement.

Earlier this month, 38 Republican and Democratic state attorneys general sent a letter in support of the SAFE Banking Act.

“This is not just an issue facing Arkansans, but affects a majority of states,” Rutledge’s office stated. “If passed, this legislation will help Arkansas minimize the dangerous problems seen by other states, such as burglaries and robberies of dispensaries who can maintain a large quantity of cash, while at the same time, allowing legitimate businesses and service providers to also conduct business within the regulated banking system.”

As for whether the SAFE Banking Act eventually makes it to a vote, or future federal bills attempt to change banking regulations, Barnes said it’s only a matter of time.

“Next year, no. Next two to three years, possibly. Within the next four to five, definitely,” he said.