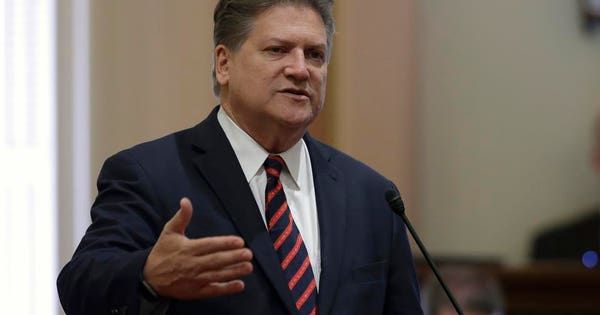 State Sen. Bob Hertzberg, D-Van Nuys, urges lawmakers to approve his measure to create a state-backed bank to handle the billions of dollars from the newly legal recreational marijuana market, Wednesday, May 30, 2018, in Sacramento, Calif. By a bipartisan 29-6 vote the Senate approved the measure and sent it to the Assembly. (AP Photo/Rich Pedroncelli)

California is one step closer to providing the state’s burgeoning cannabis industry with legal banking services.

Last month, the California State Senate passed a bill that would allow private banks and credit unions to apply for state charters to explicitly handle cannabis financial transactions. Under this legislation, which the State Assembly and California’s governor Gavin Newsom must approve before it becomes law, these limited-purpose charters would allow such institutions to offer depository services to licensed cannabis businesses.

Cannabis is still illegal on the federal level as a Schedule 1 drug, which means that traditional (federally regulated) banks are not allowed to touch cannabis money, even in the two-thirds of the country where it is legal at the state level. If a traditional bank decides to do business with a state-licensed cannabis company, it risks criminal prosecution for money laundering and “aiding and abetting” a federal crime. This means that our industry is forced to do most of its business in cash. This is a pretty dangerous endeavor if you think about the piles of bills accumulated at dispensaries, not to mention the administrative headache of trying to process payrolls, get vendors paid and audit for taxes — all with cash.

“We’ve got all sorts of public safety issues around [cannabis banking],” said California Senate Majority Leader Robert Hertzberg, the Democrat who authored the newly passed Senate Bill 51. “We have to come up with a way to make this work. There’s almost over 900 banks’ branches in California that could easily be converted into bank branches to handle cannabis cash.”

Hertzberg also authored and fought for an earlier bill, SB 930, which the California State Assembly effectively killed last August. The two bills are nearly identical, but now there is a new governor in town who might be more amenable to banking laws that could help the cannabis industry. The new bill, which would create the Cannabis Limited Charter Banking and Credit Union Law, would authorize the limited charter bank or credit union to issue special-purpose checks to cannabis businesses in order to pay government fees, taxes, rent and vendor invoices. The proposed law would require that the charters be insured.

This is far from the full range of commercial banking services our industry needs. And, given that cannabis is federally illegal, banks and credit unions in California might still be wary of setting up charters for this purpose. But hopefully a law like this one might pressure the federal government into positive action for this $52 billion (and growing) industry.

“Congress will have to act because there’s all the interstate ramifications of banking that just really cry out for federal lawmakers to do something in this space,” Steve Hawkins, executive director of the Marijuana Policy Project, told CNBC.

California is far from alone in looking for a banking solution. Attorneys general from 38 states and territories recently begged congressional leaders to pass the SAFE Banking Act, which would protect banks and credit unions from legal concerns if they work with cannabis money. The proposed SAFE bill has 206 cosponsors from both parties and passed a U.S. House committee in March.

“Our banking system must be flexible enough to address the needs of businesses in the various states and territories, with state and territorial input, while protecting the interests of the federal government,” wrote the attorneys general. “This includes a banking system for marijuana-related businesses that is both responsive and effective in meeting the demands of our economy.”

In the meantime the current California bill is awaiting its fate in the State Assembly.

And should it be signed into law, it comes with its own poison pill. If the federal government removes cannabis from its list of illegal substances, giving banks free reign to operate in the space, the California law would become void.

That just might be what most California cannabis entrepreneurs want most for this bill.

Forbes Special Offer: Get the name of a stock that’s poised to profit from the rapidly growing cannabis industry. Click here.