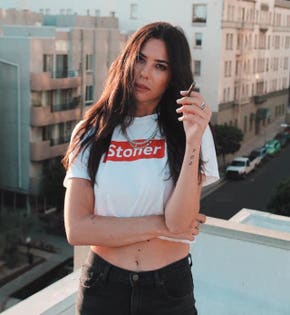 When I first heard about Rachel getting into cannabis comedy, I instantly wondered: How does someone with a judge for a mother, a district attorney for a father, and a prosecutor for a sister, a.k.a. someone living in a “giant Law & Order episode,” get into this business?

A Long History With Meds

As it turns out, Rachel’s history with cannabis started when she was five years old, and diagnosed with ADHD, she says. At the time, she was prescribed Adderall and Ritalin to treat it.

At age 12, Rachel was given another diagnosis: bipolarity.

This meant she now had to also take Lithium to treat her condition.

“For as long as I could remember, the pills never made me feel right. I was supposed to be taking something to make me feel better but it only made me feel worse. By the time I was in my mid 20’s, anytime someone would mention an antidepressant, anti psychotic, or an anti-anxiety med, my response was ‘Oh yea, I’ve taken that!’”

By the time Rachel got to college, she was fed up of pharma drugs. This is when she started smoking cannabis. “I immediately remember liking the way it made me feel, but I also felt some shame behind it because it was illegal.”

However, this changed during her last year there. In the context of a social movements class, the teacher asked students to pick one social organization and write about it. Rachel picked the National Organization for the Reform of Marijuana Laws, best known as NORML.

From Recreation To Creation

How did Rachel go from just consuming cannabis to making a career of it?

According to her, it was an accident.

It all started with a memes account, @wolfiememes, which she created as a way to remain motivated while learning how to use Adobe’s Photoshop. “Naturally I loved weed, so that’s what my humor gravitated towards,” she explained.

As her following built up, Rachel decided to start working with her best friend, Olivia Alexander, founder of Kush Queen. Olivia had a YouTube channel called “The Budd,” formerly “Buddfeed.”

I definitely think there is money to be made in the cannabis industry no matter what field.”

“We both saw a demand for high end weed content,” Rachel continued. “I definitely think there is money to be made in the cannabis industry no matter what field.”

The YouTube channel and memes account rapidly became successful, and Rachel decided to take a swing at stand up comedy – with an emphasis on cannabis topics. Within months, she was performing at L.A.’s iconic The Laugh Factory.

Seeking to diversify, Rachel started her own podcast.

“I saw the value of podcasting years ago. I have a background in marketing and I knew this medium was going to be big,” she said. “I also saw there was a shortage of cannabis podcasts. The only one I had heard of was Doug Benson’s Getting Doug with High. I approached Olivia a few years back and told her Buddfeed needed its own podcast. So we recorded 3 seasons of it and interviewed people we admired and respected in the cannabis industry.”

However, as Olivia’s brand Kush Queen took off, the podcast moved to the background and was finally put on hold.

As time went by, Rachel often missed podcasting, so she started her own, new show, “Chronic Relief,” which combined all of her passions.

“My intuition inside of me was screaming mental health. I couldn’t get it off my mind for months. Shortly after this, the comedy community suffered a huge loss in the form of suicide. I was shook, and so were a lot of my friends. I really wanted to find a way to connect with people over mental health and talk about the hard stuff. Comedians are really good at opening up and finding the funny in life’s darkest moments. I grabbed my favorite comedians and started recording.”

Before ending our conversation, Rachel shared some advice for other people seeking to make a living off cannabis entertainment: “Get to know the plant and be original!”