Residues of high potency cannabis found in the burners, and on charred pebbles placed inside them, suggest that funeral rites at the 2,500-year-old Jirzankal cemetery in the Pamir mountains may have been rather hazy affairs.

Scientists believe the stones were heated in a fire before being transferred to the wooden braziers and covered with cannabis, which duly billowed psychoactive smoke. With music as an accompaniment, the heady fumes may have prompted those present to attempt to commune with nature, spirits or the dead.

Researchers have found remnants of cannabis at ancient sites in Central Asia before, but the latest discovery points to the intentional use of plants with high levels of the active compound, THC, and to cannabis being inhaled rather than ingested.

“There has been a longstanding debate over the origins of cannabis smoking, there are many speculative claims of ancient use,” said Robert Spengler at the Max Planck Institute for the Science of Human History. “This study provides the earliest unambiguous evidence for both elevated chemical production in the plant and also for the burning of the plant as a drug.”

The discovery came about when Chinese archaeologists ran tests on 10 wooden braziers they excavated at the Jirzankal cemetery. They suspected the burners had a ritual role at the site and hoped the analyses would provide some answers. 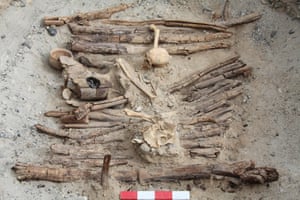 A photo of a brazier and skeleton found in one of the tombs during excavations. Photograph: Xinhua Wu

The scientists scraped material off the burners and four of the charred stones and analysed the pieces with a procedure called gas chromatography-mass spectroscopy. The sensitive technique can detect minuscule amounts of chemical residues.

“To our excitement we identified the biomarkers of cannabis, notably chemicals related to the psychoactive properties of the plant,” said Yimin Yang at the University of Chinese Academy of Sciences in Beijing. Specifically, the scientists found cannabinol, a substance produced when THC is oxidised. Given the lack of other cannabis breakdown products, the scientists believe the plants were selected to be high in THC, but whether they were cultivated or found in the wild is unclear.

Alongside the wooden burners and blackened stones, archaeologists excavated wooden plates and bowls, glass beads, pieces of silk and a Chinese harp, an instrument that often featured in ancient funerals and sacrificial ceremonies. The skeletons of individuals buried at the site have not been examined in detail, but some have holes in their skulls and what appear to be fatal cuts and breaks to their bones, raising the possibility that at least some of the dead were sacrificed.

“Nearly all the braziers contain the biomarkers of cannabis and one brazier is severely burned, implying that the braziers were being used during funeral rituals, possibly to communicate with nature, or spirits or deceased people,” Yang said, whose study appears in Science Advances.

The Jirzankal cemetery sits more than 3,000m (9,800ft) above sea level in an arid landscape patterned with parallel stretches of black and white stones. The entrances to individual tombs at the site, some of which hold varaious bodies, are marked by mounds surrounded by stone circles. The wooden braziers were found in the more elite tombs, the scientists said.

Little is known about the origins of cannabis smoking, but its use at the cemetery resonates with Herodotus’s written account from the 5th century BC. In his Histories, he described how people on the Caspian steppe in the mid-first millennium BC would sit in a small tent and burn the plants on hot stones in a bowl. Other evidence for cannabis use has shown up at burial grounds further north in China and in the Altai mountains of Russia.

Though remote today, the mountainous Pamir region may once have sat astride a busy trade route of the early Silk Road. If cannabis smoking originated there, or nearby, it may have helped to spread cannabis smoking from Central Asia around the world.