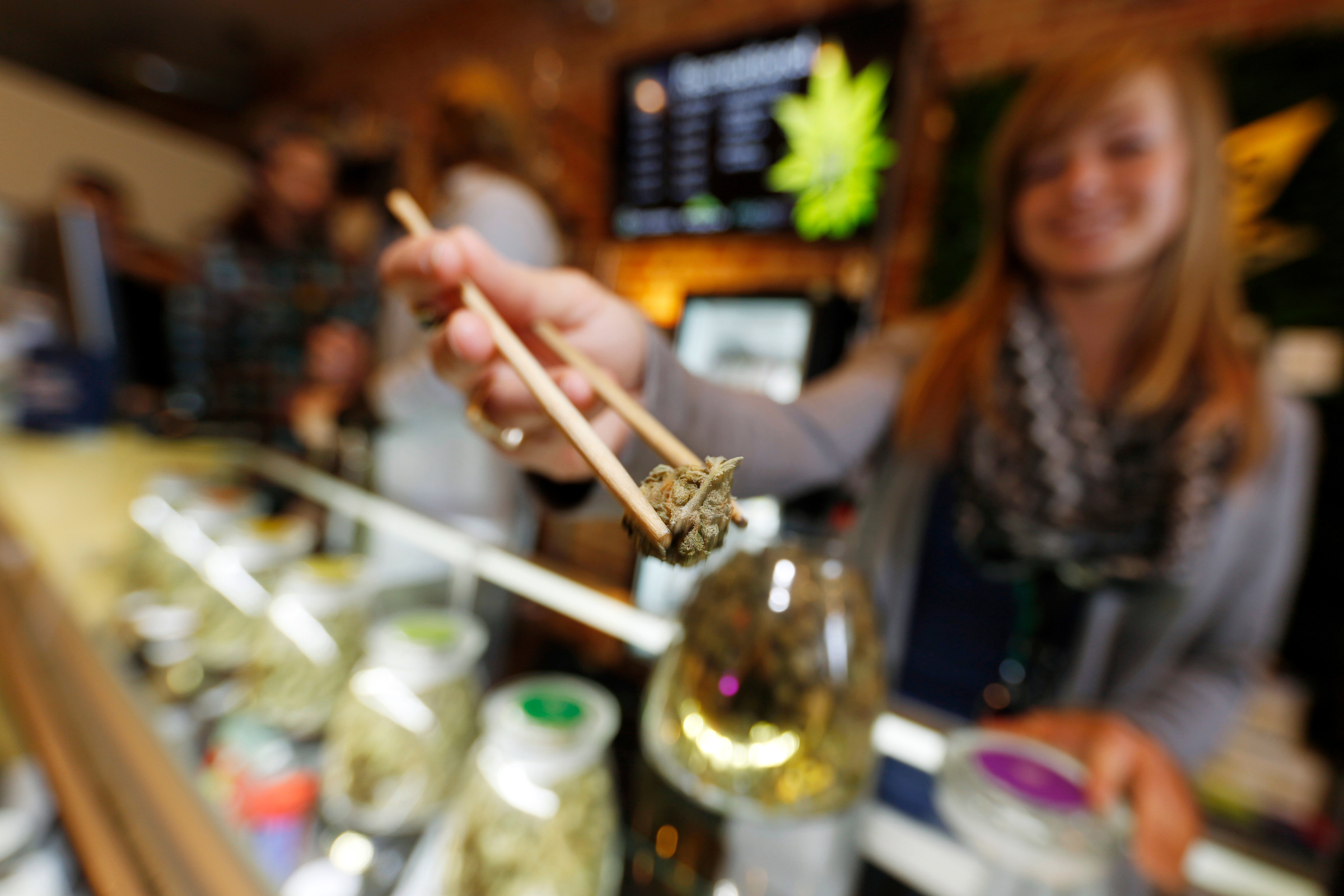 No one knows more about the complicated alliance between unions and the cannabis industry than Dale Sky Jones, chancellor of Oakland’s Oaksterdam University, a marijuana trade school. She calls herself “Patient Zero.”

In 2010, major unions were just starting to throw their weight behind weed in California as part of Prop 19, a ballot initiative for recreational marijuana. Jones says an organizer for the United Food and Commercial Workers International Union (UFCW) walked into the campaign office for Prop 19, a campaign Oaksterdam’s founder spearheaded, and said, “You’re not just a bunch of tree-hugging, crystal-gripping hippies carrying signs. You actually have a statewide campaign on the ballot.”

Oaksterdam agreed to unionize, and UFCW helped get Prop 19 backers into meetings with decision-makers in Sacramento. “We got real all of a sudden,” Jones says.

But the alliance didn’t last. All the clout in California didn’t stop federal authorities from raiding Oaksterdam in 2012, and the leading UFCW weed organizer was indicted in 2015 for bribery and extortion. As the school rebuilt, Jones offered to bring in the union again, but Oaksterdam workers declined. They were skeptical the UFCW could deliver.

Some of that skepticism remains. Across the country, the cannabis industry is weighing whether to join forces with the UFCW, now the most influential union in cannabis, which reps more than 10,000 marijuana workers in 14 states. It has negotiated contracts with major operators like MedMen, helped legitimize the movement for cautious politicians, and hammered out pro-worker provisions in multiple state legislatures. But, as the UFCW’s influence grows, so does its list of critics, who say the union sometimes works against the goals of the larger cannabis movement.

In 2007, long before most other big unions were interested, the UFCW began courting weed workers in California, cannabis’s biggest and most important battleground state. Back then, long before full legalization, working conditions varied wildly behind “Redwood Curtain,” far from the eyes of courts and labor regulations. There were beloved mom-and-pop operations where employees had personal chefs and massage therapists, and could earn a year’s wages from 3 months of trimming. There were also LED-lit nightmares where employees were paid in product, worked at gunpoint and female employees were sexually harassed or trafficked.

“We looked at the cannabis industry and said the union could use its political power to bring forward the good players out of the black market, and bring some credibility and establish a legitimate industry,” says Jim Araby, of Northern California’s UFCW Local 5. Other UFCW chapters followed suit, hoping they could use marijuana to create good jobs and business ownership instead of prisoners.

“Our members live in communities that have been disproportionately affected by the War on Drugs,” says Nikki Kateman from RWDSU/UFCW Local 338, which works in New York state. “We want to right the wrongs our members have experienced.”

By 2011, the union launched a national cannabis organizing campaign, and advocates say partnering with a national labor organization finally got politicians to trust them because it meant officials were working with a familiar partner. “Having them participate in a lot ways helped to legitimize cannabis in the eyes of some of our legislators,” says Kristin Nevedal, executive director of the International Cannabis Farmers Association and member of the California Bureau of Cannabis Control’s cannabis advisory committee. She has worked on multiple statewide policy efforts alongside UFCW. “[Unions] had these relationships that as patient advocates we hadn’t established. These are decades-long relationships with governments.”

The union also provoked the National Labor Relations Board into clarifying its stance on cannabis worker protections. According to Myrna L. Maysonet, a labor attorney at law firm Greenspoon Marder LLP, the Board had been cautious about getting involved with marijuana businesses until the UFCW came along. “For the longest time, the NLRB wasn’t stepping in because selling marijuana was illegal, and how can you protect rights that are illegal?” she said.

In 2013, the UFCW backed employees of Wellness Connection of Maine, a medical marijuana distributor, who complained of health hazards and union-busting from management. Wellness Connection settled with the workers, but in the course of the dispute, the NLRB issue a 2013 advisory memo concluding that cannabis workers are protected by labor laws. This, according to the UFCW, was a national first. (The NLRB declined to comment on its current policy.)

In the years that followed — in 2014 in New York and 2015 in California — the UFCW passed one of its signature policies, the labor peace agreement, a truce between organizers and management to help avoid situations like the union-busting in Maine. In both states, new cannabis ventures must submit to the state a deal with a recognized union as part of their certification to do business: management won’t stop workers from joining a union, and in exchange, unions won’t encourage strikes against the company. This marked a step forward from the marijuana world’s sketchier labor past, when many employees could be fired on the spot without just cause — including for starting a union.

“We made sure that if companies were found to have any labor code violations, that they could lose their licenses,” says Araby, the California UFCW organizer, of the state’s weed laws. “It’s the most labor-friendly in the country, and that’s partially because we were involved in it.”

The marijuana business comprises numerous groups with different goals, such as growers, activists, retailers, and investors. As the UFCW’s influence in cannabis continued to grow, it sometimes backed policies that favored one part of the movement and alienated others.

The fight around who gets to distribute pot in California, where delivery should be allowed, and who gets to sell it has been particularly divisive. In 2018, the UFCW joined dispensaries in Southern California to lobby against a state bill that would allow licensed growers without retail permits to sell at fairs and farmers markets. Growers, who’d often worked closely with the UFCW, felt like the union was abandoning them for its retail base.

“It represented a low point to me for labor,” says Hezekiah Allen, a third-generation marijuana farmer and longtime advocate for rural cultivators. “Their opposition successfully killed that bill.” Still, outside the world of hardball pot politics, workers and owners with union deals around the country said joining the UFCW brought major benefits.

Olivia Hager works as lead medical consultant at Have a Heart dispensary in Seattle, which inked a UFCW bargaining agreement in 2018. She initially worried joining a union would take too much from her paycheck, but she’s glad she joined because of high pay and union health benefits. “We have phenomenal health care,” she says. “I’m being very well taken care of.”

“It’s definitely helpful to be working for a company that’s trying to make our quality of life a little better,” said Nick Barbato, a patient care coordinator at Vireo Health of New York, which signed a UFCW deal in 2016. “I really am trying to stay with this company.”

Business owners have also been enthusiastic about working with the UFCW. Dave Rosen, CEO of Waveseer, which owns what he says is Nevada’s only unionized dispensary, saw a UFCW deal as a way to fight for the disappearing middle class. “I believe there are three new jobs, period: Uber, Lyft and weed. We already know that Uber and Lyft aren’t providing a living wage and health insurance,” he said. “The chasm between rich and poor only grows at historic levels, and it has tracked directly with the decline in unions.”

Gilbert Herrera, a manager at the Rio Rancho, New Mexico branch of the Natural RX dispensary chain, says management suggested a UFCW deal to workers, not the other way around. “It wasn’t like we went union because we needed to be treated better. In fact it was our owner’s idea,” he said. “Most small business owners don’t want to do that.”

Once the marijuana industry got outside recognition, thanks in part to the UFCW, it unleashed a flood of corporate money. For the union to remain legitimate, it will have to figure out how to maintain its track record for workers in this new era of “Walmart-ized” weed, where some owners’ only goal is earning maximum profits.

The move towards corporate ruthlessness is to be expected though, according to Araby. “There are now big businesses involved, big investors that don’t want to deal with labor,” he says. “It was the marijuana movement, now it’s the cannabis industry.”