Medicated High Chew edibles are shown on display and offered for sale at the cannabis-themed Kushstock Festival at Adelanto, Calif. on Oct. 20, 2018. (Richard Vogel/Associated Press)

The federal government will confirm today the date when new cannabis products — like edibles, beverages, topicals and extracts — will be legal.

The final regulations will be rolled out today by Organized Crime Reduction Minister Bill Blair, the minister responsible for administering the Cannabis Act.

When dried cannabis became legal for recreational use last October, the federal government continued its consultations on rules for edibles and other products. Those consultations ended in February. Ottawa indicated at the time that regulations on cannabis edibles and concentrates would come into effect on Oct. 17, 2019, but has not yet said when these products will be available for sale. 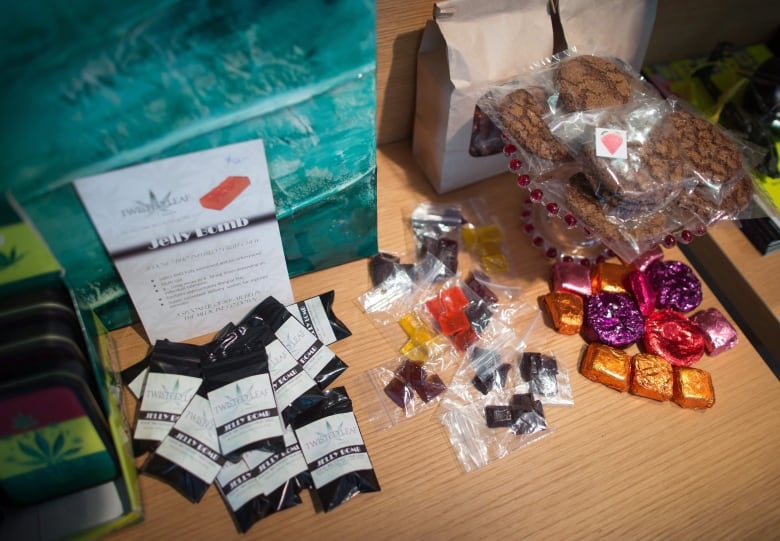 Cannabis edibles are not yet available from licensed sellers. Experts say they are in high demand on the black market. (Darryl Dyck/The Canadian Press)

Greg Boone, CEO of the P.E.I.-based cannabis firm Dosecann, said he’s very excited to see the regulations finalized. For the past three years, he said, his company has been preparing for this announcement.

„That will get us into the full production of these edibles or value-added products,” he said. „And the goal is to build inventory to be able to satisfy the market that we believe exists across the country for these types of products.

„Things such as vape pens, potentially topicals, and edibles such as chocolates and potentially gummies. Those types of products will eventually be rolled out.”

Health Canada will maintain strict rules on labelling to prevent companies from making the products more attractive to young people.

The packaging and labelling must have a clear cannabis symbol, a health warning listing the product’s Tetrahydrocannabinol (THC) and Cannabidol (CBD) content, very limited use of logos and colours and child-resistant packaging.

Critics have voiced the fear that edibles looking like candy might be too attractive to children. The Task Force on Cannabis Legalization and Regulation recommended a ban on any cannabis product that could appeal to children — such as those that resemble popular food items or are packaged to look like candy.

No cannabis in restaurants

Once the new regulations are in place, cannabis companies will be able to offer concentrates such as resin or cannabis oil for vaping. Vaping products with scents that could appeal to children would not be permitted.

Restaurants will not be allowed to serve food containing cannabis.

The market for this next-generation category of cannabis products is forecast to be worth about $2.7 billion annually, according to a Deloitte report released earlier this month.

The Deloitte report said about 50 per cent of edibles users surveyed said they planned to consume cookies, brownies or chocolate at least once every three months.

With anticipated demand so high, the government’s plan to roll out regulations in October gives the industry time to build inventory.

Since cannabis was first legalized last year, supply shortages have persisted in many provinces. The introduction of edibles could drag out those shortages for years.

Anticipating robust demand, companies like Dosecann have been stockpiling cannabis for use in research and in edible products.

„We’re holding back or acquiring product basically to turn into oil, which we will put into our value-added products, where we see greater potential for profitability,” Boone said.

Boone said he expects his company of 45 employees will more than double in size by the end of the year.