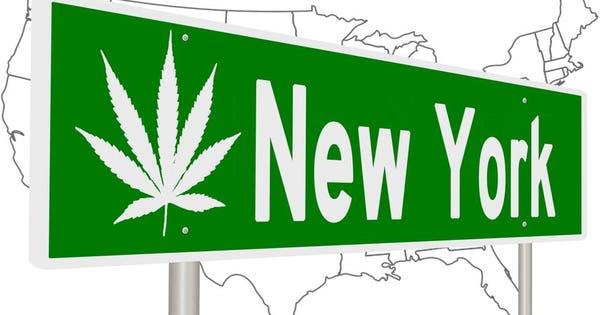 A rendering of a New York sign photo credit: Getty

“To my fellow activists,” Smit writes;

“Never in my nearly ten-year history with the chapter have I ever been more hopeful about our chances of legalizing the responsible adult use of cannabis in New York.

“We’re truly on the cusp of great change in New York, the Marijuana Regulation and Taxation Act (S.1527B/A.1617B). Colloquially referenced as the “Greene Bill” in honor of dearly departed activist Doug Greene, the MRTA is making its way through the legislative process in these final days with haste.”

Time is running out and cannabis is not going to legalize itself.

“We need the Senate Finance and Assembly Codes committee to vote on these bills this weekend for them to be voted on by the end of the session on the 19th! We need to increase the pressure on these last few holdouts from the Senate Democratic Conference. This group of Democratic Senators (see below for names and contact info) have the power, and we need to show them that they have the support from their constituents to use it!”

Smit continues that he cannot stress enough how important it is that these Senators have to hear from constituents in their district.

“If you know someone in the areas listed below, please consider forwarding this call to action. These calls need to be made now and continuously every day until the session is over and these bills are brought to a vote,” Smit insists.

“This fight isn’t over, but we’re so close to winning,” Smit says. “It can’t be done without your help. If we don’t pass this Bill by the end of the session on June 19th, we will not get another opportunity like this until next spring.”

Ryan G. Smith, Founder and CEO New York-based B2B cannabis wholesale platform LeafLink says, “New York, although typically progressive, has truly fallen behind both other markets and the general American sentiment supporting cannabis legalization. There are two types of markets now in the US, those that listen to their constituents and those that are late to the game. Unfortunately and today, that’s New York.”

Sponsored by Senator Liz Kruger and Assembly Majority Leader Peoples-Stokes, the amended MRTA ends prohibition which has long criminalized Black and Latinx people and other communities of color. The Bill also expunges prior cannabis-related criminal records; addresses additional devastating impacts of marijuana criminalization in the fields of immigration, family law, housing, and employment; and includes a social and economic equity plan that prioritizes licenses for people from communities most affected by criminalization.

The Bill also directs tax revenue from legal marijuana sales to be reinvested in communities most harmed by the war on drugs through the Community Grants Reinvestment Fund, which will fund job training, economic empowerment, youth development programming, and re-entry services. Additional revenue will be used to support public schools in the state, plus drug treatment programs and evidence-based public education campaigns

With just days left in the New York State legislative session and resumed negotiations, Start SMART NY will hold a press conference and rally out front of New York State Governor Andrew Cuomo’s New York City office today urging lawmakers to enact the MRTA, immediately. The rally will be held today at noon,  outside Gov. Cuomo’s office, located at 633 3rd Ave, New York, NY 10017.  Advocates are meeting at 11:30am at 633 third Ave, between 40 and 41 Streets, in Midtown Manhattan, New York.

Start SMART NY is a coalition comprised of organizations and advocates dedicated to criminal justice reform, civil rights, public health, and community-based organizations. The organization supports marijuana legalization with robust social justice and equity provisions in line with the objectives and prior initiatives of the Start SMART NY campaign, the rally centers New York’s fight for legalization around racial and economic justice.

Those who cannot make it to the rally are encouraged to participate by calling these senators today (listed below) to ask for them to support the Marijuana Regulation and Taxation Act social equity, clemency and record expungement for people who are incarcerated for non-violent, prohibitionist cannabis crimes.