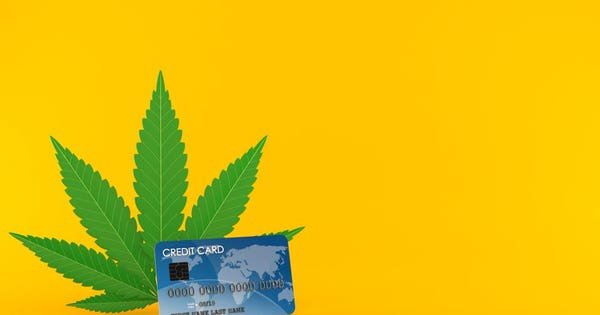 Columbia Care Inc, a multistate medical cannabis operator, is setting a new precedent for the legal cannabis industry. Last week, the company announced it was launching a credit card for purchases at its multiple locations, the first of its kind for a market long plagued by banking restrictions due to the marijuana’s federal illegality.

Multistate medical cannabis operator Columbia Care has launched a credit card, the first of its kind for the legal cannabis industry. Photo of a 3d illustration of a cannabis leaf with credit card isolated on orange background.

The unveiling of this cannabis credit card follows a trial program in New York that launched the second half of 2018. According to the company in the release announcing the credit card, Columbia Care „experienced an 18 percent increase in average basket size for in-store purchases using the CNC Card over other forms of payment, in addition to significant increases in repeat visits and an increased utilization rate for home delivery and automatic fulfillment.” Further, Columbia Care claimed that home delivery in New York has become its fastest growing segment of the CNC program and „currently represents over 10 percent of the Company’s revenue in the state, with an average basket size 40 percent greater than those in-store.”

“We are in the business of expanding the entire national cannabis market, and this is exactly the type of industry-wide challenge our team excels at solving,” said Nicholas Vita, CEO of Columbia Care, in a public statement. „By launching the first credit card in the country that can be used by consumers and industry participants to purchase cannabis products, we now exclusively offer an important capability that will serve Columbia Care’s national growth initiatives, including home delivery, automatic fulfillment and e-commerce.”

The program recently expanded from New York into the company’s Delaware and Pennsylvania markets. Later this month, the CNC card will be available in Illinois and Arizona, with expansion slated to all Columbia Care dispensaries by the end of the year. Although the card is currently only available for use at Columbia Care locations, the company is presently „evaluating opportunities through targeted partnerships for broader market adoption as the premier and only credit payment option available to the cannabis industry,” noted the release.

The CNC card affords consumers a more attractive payment solution, filling an important niche in a space that has been starved for financial alternatives. “If given the choice to pay with credit or cash, consumers prefer credit, and until now, the cannabis industry has been predominantly cash-based due to restrictions on the use of credit cards for cannabis purchases,” added Vita. „Through our exclusive network of partners and painstaking attention to detail, we successfully navigated the complexities of the financial industry unique to cannabis and are proud to once again lead the way as the first company to solve this fundamental issue.”

In addition to providing a reliable electronic form of payment, CNC cardmembers may also be eligible for other benefits and offers that include discounts, educational seminars and cash back affinity programs.

Some prominent voices in the cannabis industry are embracing the news, which is not surprising considering that finding accessible and user-friendly payment options has been an ongoing issue for consumers. Speaking to the Chicago Tribune, Morgan Fox, spokesman for the National Cannabis Industry Association, commented, “This has always been an issue that has plagued the cannabis industry. Since people have been looking for viable alternatives, people have been trying to fill that gap in lieu of better federal policy.”