It’s still early, but claims experience thus far in the cannabis insurance market is encouraging, according to one leading writer.

“So far, we’re optimistic that we’re going to see that our experience is going to be better than our other lines of business,” said John Donahue, president and CEO of Topa Insurance Co., which offers cannabis products in more than a dozen states.

Donahue made the comments during an hour-long Insurance Journal webinar, Cannabis & Insurance, What You Need to Know About the Budding Business, which aired live on May 15. The webinar can be viewed on InsuranceJournal.com’s Research and Trends section.

The webinar, which was sponsored by Cannasure Insurance Services, also featured two other panelists with experience in the area: Chris Boden, cannabis practice group team leader for Crouse and Associates, and Ian Stewart, a partner in Wilson Elser and chair of the firm’s cannabis law practice team. 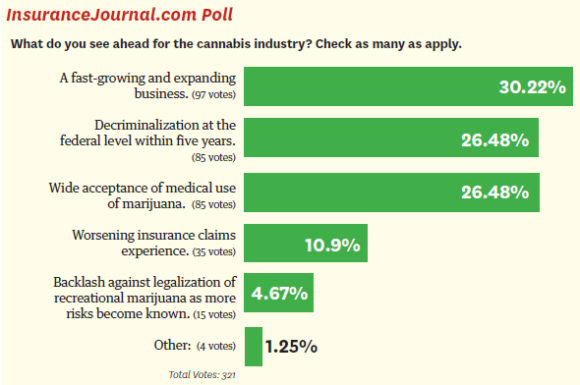 “And so, we tend to be very conservative around our pricing, and our philosophy, and the underwriting, but it’s really early in the game. We’ve seen some property losses,” Donahue said.

When the cannabis industry was just getting started with adult-use being legalized only in a few states like California and Colorado, Stewart said the belief was that most of the claims insurers would see would concern product liability, bodily injury, failure to warn, manufacturing defect, in which people would consume a cannabis product and be injured in some way, or injure others, and sue.

“And certainly, there’s a few of those suits, but they are not nearly as prevalent in terms of the number and severity that I think people expected two years ago, which I think is good news for the industry,” Stewart said.

He believes mislabeling claims, false advertising claims and consumer class actions alleging deceptive business practices, in terms of what’s on the label, such as health claims, will become more common as the industry grows.

Panelists discussed other challenges the business faces, including finding reinsurance.

“That’s probably one of our biggest challenges,” Donahue said. “We’re a small company, we need reinsurers to provide capacity, and some of the reinsurers have said, ‘Hey, this seems like it makes sense. We’re part of it.’ Others have taken more, wait and see (approach), and others have just out and out said, ‘We’re not going to do it until the federal rules are worked out.’”

Donahue said Topa has worked to educate the reinsurance market on the cannabis market, including basics like risks, coverages and exclusions. The carrier has also tried to stamp out the idea that cannabis operators are unprofessional people in a business populated by stoners.

Interested in getting into the budding cannabis insurance business? Following are a few resources (pro and con) for keeping up on cannabis industry news including laws, regulations, events, risks and opportunities.

“There’s this idea that, maybe, you’re insuring this group of these dudes, and they’re in flip-flops. But really, what we’ve tried to do is insure people that are true professionals that really take this business very serious. And when we bring the reinsurers out, they see that, in reality, these people are very serious about the business they’re in,” Donahue said. “They’ve invested a lot of their own personal money, because they can’t get the bank loans in most cases, so these are entrepreneurs that are really focused on it.”

Boden discussed how insurance products are being marketed.

“When I started, I got introduced, it was a client of mine, and he said, ‘Hey, I’m opening a dispensary up. Can you get insurance?’” he said. “And, this was in 2010, and I was always under the thought, ‘Hey, yes. There’s got to be insurance somewhere, no matter how difficult it is, we can do it.’”

That single retail location it found insurance for, he said, “blew up to be a fully integrated $1.5 million in premium. I mean, just blew up, and by that happening, they just started introducing me to their people.”

He offered two ways to market cannabis business insurance products: Go to local organizations, such as grower’s associations in local counties, where brokers can get “intimate time” with cultivators and operators. Second, start telling people what you do.

“You’ll be surprised,” Boden said. “You’re at a mixer, or you’re at a dinner, whatever, and they ask you ‘What you do?’ Tell them you do cannabis insurance, and … every single time, without fail, they will say, ‘Oh, I know a guy who does this. I should introduce you.’ And, that has opened a lot of doors just by talking about it. And it’s simple as that.”

“I think that’s a very important part from the get-go. Get their license info, get their permit info, make sure they’re legit, because you’ll put in a ton of time, and you get the basics, the square feeds and all that good stuff, and then you find out they don’t have a license, or they haven’t been approved, they don’t have a (conditional use permit) and that … you kind of wasted your time with that one,” he said.

Market data show the cannabis industry is growing. Spending on legal cannabis is expected to reach $57 billion worldwide by 2027, and spending in North America alone is forecast to reach $47.3 billion in the next decade, according to Arcview market Research and BDS Analytics. BDS also expects growth in the CBD-infused beverage market, pushing up sales in the overall edibles market.

“By 2022, the U.S. edibles market is projected to reach $3.4 billion, with cannabis beverage sales expanding roughly tenfold, to $374 million,” BDS states its Top 10 Trends in Cannabis for 2019 report released earlier this year.

Many expect the market to explode if banking legislation passes, enabling cannabis operators to do business with banks, including making deposits, getting loans and taking care of other transactions like federally legal businesses do. Because cannabis is still considered a Schedule I drug by the federal government, federally insured banks are unable to do business with companies for fear of being shut down.

The Secure and Fair Enforcement (SAFE) Banking Act, which was introduced in March 2019 to protect banks and their employees from liability for federal prosecution when dealing with cannabis companies, is making its way through Congress.

The bill, which has attracted 175 co-sponsors from both parties so far, is also supported by the banking sector, the National Association of Attorneys General and Treasury Secretary Steven Mnuchin. Earlier this month, the attorneys general of 38 states sent a letter to Congressional leaders to support the act.