Thanks to the legalization of recreational cannabis in 10 states and the District of Columbia, sparking up a joint in these areas is as easy as ordering a glass of wine.

Spending on legal cannabis, which includes 33 states and the District of Columbia that allow medical cannabis use for conditions such as glaucoma, chronic pain, and the side effects of cancer treatments, topped $12 billion worldwide in 2018, according to industry analysts, and is expected to increase to $31.3 billion by 2022.

With all that potential profit on the line, it’s no surprise there is growing interest in legalizing cannabis cultivation. California has issued around 10,000 cultivation permits. Between 2012 and 2016, the number of cannabis farms in the Golden State increased 58 percent and the number of plants increased 183 percent.

While much of the research has focused on public health and criminalization, the environmental implications of commercial-scale cultivation have been largely ignored. Could the increases in cannabis cultivation send the environment up in smoke?

New research has linked production of the once-verboten plant to a host of issues ranging from water theft and degradation of public lands to wildlife deaths and potential ozone effects.“We have a culture and history of cannabis cultivation in remote areas that may be sensitive to environmental disruptions,” explains Van Butsic, co-director of the Cannabis Research Center at the University of California Berkeley.

In California, the water-hungry crop is often grown in remote, forested watersheds and requires almost 22 liters of water per plant a day during the growing season, which adds up to three billion liters per square kilometer of greenhouse-grown plants between June and October, according to some research. During the low flow period, irrigation demands for cultivation can exceed the amount of water flowing in a river, leaving little water to sustain aquatic life.

Some of the biggest environmental offenders are cultivators operating unpermitted farms on public lands. These “trespass grows” are often in national forests or on tribal lands where water is diverted from streams to irrigate acres of plants. In 2018, there were an estimated 14,000 trespass grows on federal and private lands in Humboldt County, California, alone. 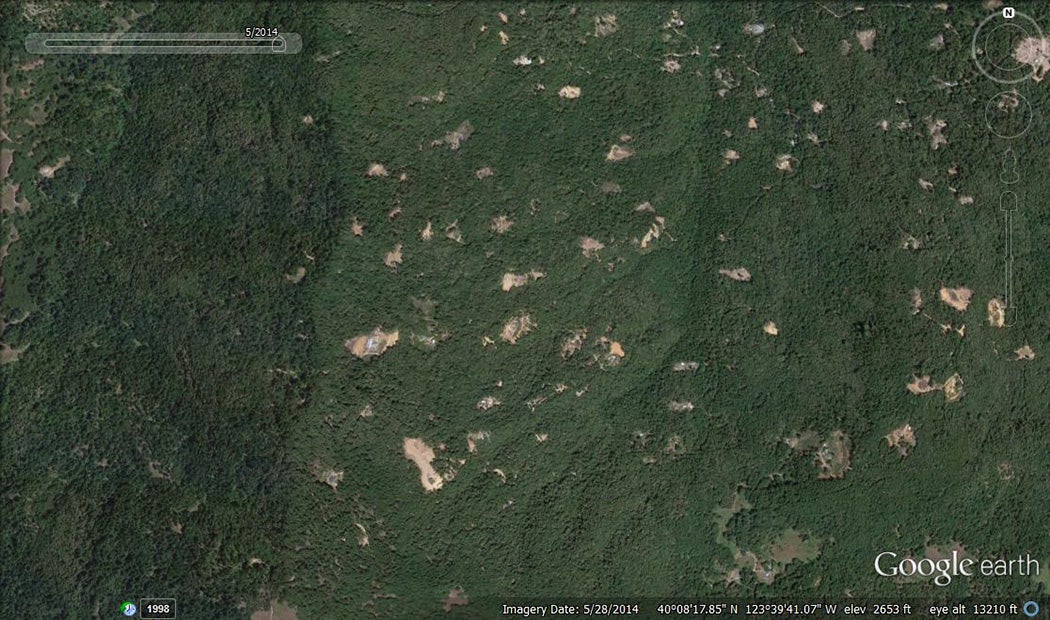 Satellite image of cannabis farms in the forest in Humboldt County. Courtesy of the UC Berkeley Cannabis Research Center

At the Shasta-Trinity National Forest in California, a team from the Integral Ecology Research Center, or IREC, a nonprofit organization dedicated to wildlife conservation, removed more than five miles of irrigation lines that diverted more than 500,000 gallons of water per day to irrigate cannabis plants.

IREC co-director Mourad Gabriel notes that trespass grows are often located near headwaters and have disastrous downstream effects. For example, streams in Mendocino, California, often run dry during the summer when growers are diverting water, decimating populations of Coho salmon and steelhead trout. “These are drug trafficking organizations looking to profit off of our natural resources,” says Gabriel.

The cultivation sites also interfere with the restoration of distressed habitats. Local environmental groups complained that the grows overwhelmed their conservation efforts and, in some cases, disrupted ongoing restorations or made the work more dangerous, according to a 2018 study published in Humboldt Journal of Social Relations. The grows drained and polluted streams, degraded watersheds and killed wildlife.

Trespass grows, which use mass quantities of toxic rodenticides to keep rodents from chewing on irrigation lines, have been linked to the deaths of fish, birds, and mammals. One study found that 79 percent of dead fishers—small carnivorous mammals, collected in California between 2006 and 2011—had been exposed to pesticides at trespass grow sites. The rate continues to increase, according to Gabriel. Mule deer, gray foxes, coyotes, northern spotted owls and ravens have also been victims of poisoning, linked to cannabis cultivation. 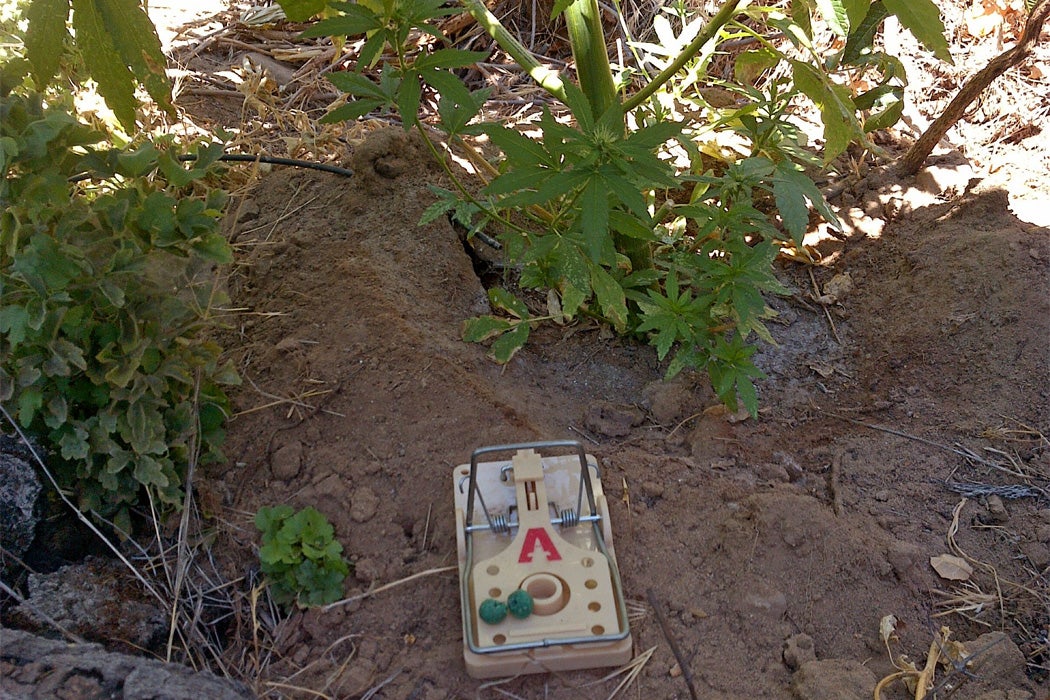 “The amount of fertilizers and pesticides we find on one half-acre [of illegal] cultivation plot could be [used on] 1,000 acres of corn—and wildlife are paying the price,” Gabriel says.

William Vizuete, associate professor at the University of North Carolina’s Gillings School of Public Health, is working on an air quality model to better understand how commercial cannabis cultivation could affect the atmosphere. His research showed that cannabis plants produce volatile organic compounds or VOCs that can produce harmful pollutants.

“If plants produce VOCs, there is a high possibility that under certain conditions, cannabis cultivation could impact the ozone,” Vizuete explains.

Cannabis emits potent VOCs called terpenes that, when mixed with nitrogen oxide and sunlight, form ozone-degrading aerosols. In a high desert zone like Denver, where normally there are few sources of VOCs, any new source of such pollutants will likely lead to ground-level ozone production, Vizuete notes. He worries that the significant numbers of cannabis plants being grown will become the regular source of VOCs, exacerbating the issue by combining with the manmade nitrogen oxide spewed from the many cars in that urban environment. Vizuete worries that the significant numbers of cannabis plants being grown in an urban area could exacerbate the issue. (High concentrations of VOCs have been linked to a range of human health issues, from nausea and fatigue to liver damage and cancer).

To test the potential effects, Vizuete grew four strains of cannabis (from among the 600-plus strains available in Colorado): Critical Mass, Lemon Wheel, Elephant Purple, and Rockstar Kush—for 90 days and measured the terpenes at each stage of growth. The results showed that in Denver, assuming a concentration of 10,000 plants per cultivation facility, cannabis could more than double the existing rate of annual VOC emissions to 520 metric tons and produce 2,100 metric tons of ozone.

Vizuete believes his estimates might be conservative, explaining, “We picked four [cannabis] strains based on their popularity, and their VOC emissions might not be representative all of the strains. Additionally, in commercial facilities, where conditions are optimized for growth, emissions may be even higher.”

Regulating the production of cannabis can address many of the environmental issues associated with its cultivation, argues Jennifer Carah, senior scientist in the water program at The Nature Conservancy of California.

It’s more expensive to purchase legal cannabis than to buy it on the black market, plus not all growers are willing to go through the due process to become legal.

In California, where up to 70 percent of legal cannabis is grown, the California Department of Food and Agriculture regulates the licensure process but many counties and municipalities also have the authority to grant cultivation licenses and, Carah says, the regulations are highly variable. Plus, the black market for cannabis still exists. It’s more expensive to purchase legal cannabis than to buy it on the black market, plus not all growers are willing to go through the due process to become legal.

“The black market is not going away,” Carah admits, “but to the degree that we can entice growers into the legal market, their agricultural practices can be regulated like other agricultural crops, which will go a long way to addressing potential environmental impacts.”

Recently, legalization has put a dent in the number of trespass grows. Illicit cultivation in Oregon forests decreased following legalization.

Some states have established environmental regulations for cannabis growers. California Water Boards require permitted growers to register water rights and follow strict guidelines that include prohibitions on diverting surface water from April to October and irrigating with stored water during the dry season—regulations not imposed on other California-grown crops. In Washington State, the Puget Sound Clean Air Agency requires growers to submit information about their plans for monitoring and controlling air pollution.

Butsic of UC Berkeley argues that federal legalization would also provide new funding opportunities through organizations such as the National Science Foundation and Environmental Protection Agency to allow researchers to assess environmental risks and develop solutions.

From a pollution perspective, federal legalization could set emissions standards.

“There are lots of technologies that capture VOCs before they enter the atmosphere that are required in other industries like gas stations,” Butsic explains. “Before [emissions] standards can be set for cannabis, we need recognition of the issue and long-term data to develop regulatory statutes—and we’re a long way from that because federal prohibition has hindered research and we don’t have the science yet.”