Is there too much unusable cannabis stuck in Canadian producers’ vaults? That’s a question being asked by BMO Capital Markets analysts after noting the gradual increase in unfinished inventory – defined by regulators as cannabis that is not packaged, labelled or ready for sale – held by Canadian pot companies. As of March there were more than 150,000 kilograms of unfinished inventory. BMO Capital Markets expects some of the unfinished inventory might be unusable for consumption or extraction, potentially necessitating inventory writedowns. BMO adds it was difficult to quantify how much of that cannabis would be impacted.

Acreage shareholders give thumbs up to Canopy tie-up

Canopy Growth’s blockbuster deal to acquire U.S. cannabis operator Acreage Holdings moved one step closer on Wednesday. Acreage’s shareholders voted nearly unanimously in favour of the company being acquired by Canopy, only when it is federally permissible to do so. Shareholders voted more than 95 per cent in favour of the deal, far surpassing the more-than-two-thirds required for approval. For Canopy to officially take over Acreage, U.S. federal law would need to be changed to formally recognize the states that have legalized marijuana. Once the deal is completed, Acreage shareholders would own approximately 12.1 per cent of Canopy.

Make it another Canadian cannabis company heading south of the border to take advantage of the growing demand for U.S. hemp. Shares of CannTrust soared on Wednesday after it said it signed a joint-venture deal with Elk Grove Farming Company for more than 3,000 acres of farmland designated for hemp production in Southern California. CannTrust said this is the „first step” in its development of „full-scale” U.S. operations. Once a binding agreement is executed, commercial operations are expected to begin in 2020, subject to regulatory approval.

Statistics Canada released a slew of cannabis-related reports on Wednesday, leading off with how much Canadian governments have generated in taxes since recreational pot was legalized. Federal and provincial governments earned $186 million in cannabis-related revenue in the first five-and-a-half months since October, StatsCan said. Roughly half of that revenue came from excise tax revenue, while the other half came from general taxes on goods and services. StatsCan also provided new inflation figures for recreational cannabis, with prices up 0.8 per cent from January to May 2019.

187%
— The increase in total acres of hemp planted by Charlotte’s Web in 2019 compared to the previous year. The company plans to plant a total of 862 acres of hemp in the U.S this year. 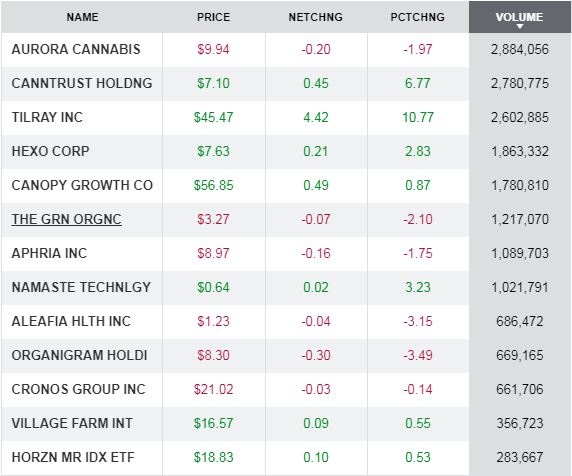