Left and body images via Author | Right image via Shutterstock.

Back when I was a pathetic teenage stoner, all knobby elbows and baggy jeans, the pop can was the smoking instrument of desperate choice. Should myself and my scuzzy compatriots find ourselves bereft of rolling papers or missing the One Friend Who Has a Pipe, we would descend into aluminum can barbarism.

The can would be crinkled and poked until barest minimum of smokeability was achieved and the ten dollars worth of bad weed we scraped together would be packed, a toxic crackling filling the air as flame was touched to can and I inhaled smoke and probably a horrifying amount of chemicals that will undoubtedly limit my faculties at some future date. If they haven’t already.

This recollection of my ignominious teen days was inspired by a visit to the Vape Showcase room, part of the Lift and Co. Cannabis Expo in Toronto the other week. Inside the room I saw the gleaming, antiseptic tools of our pot-smoking future present. An excited vendor showed me his wide selection of beautiful vapes, all shining stainless steel, quartz, and glass mouthpieces. As he showed me how to gracefully disassemble his dab pen—perfect for the adult man who wants to get absolutely blitzed in a movie theater, but with a touch of class—I couldn’t help but reflect upon how far away I was from huffing on a can of grape Crush underneath a soggy railroad bridge. 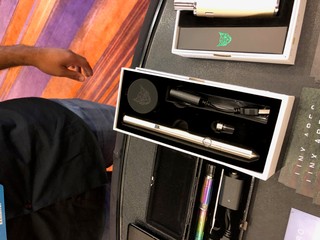 Cannabis has been legal in Canada for nearly a year, and on the surface the change has seemed minimal. Thanks to shortages and edibles being illegal until October 17th, people are still going to dealers and illegal dispensaries. In Toronto, the random wafts of weed you encounter on the street is no more plentiful than before. And thanks to crazy strict advertising laws that basically don’t allow cannabis companies to actually try to recruit customers, it’s not like there’s a weed equivalent of Budweiser and Nike constantly reminding you to buy their product.

But we keep being told cannabis is Big Business, even though to the average person it hardly exists. So I, an average person, wanted to truly know what legalization looks like on the macro scale—hence, the Big Weed Conference. The company that put on the conference, Lift & Co. describes itself as, “A cannabis-focused technology and media company that monetizes a platform of advertising solutions, events, and data insights to enable cannabis businesses to better understand, target and ultimately monetize cannabis consumers.” Oh yes. That is the kind of mind-numbing, corporate gobbledygook that gets this cynic’s mouth watering. It was off to the conference to find out what weed looks passed through the filter of meaningless corporate drivel.

Stuffed inside two floors of Toronto’s Metro Convention Center were all aspects of the burgeoning legal cannabis market. There were stalls upon stalls of vendors hawking all and any products tangentially tied to cannabis, odor-proof bags, really fancy dirt that was described in a way that made me think it was delicious, halogen lighting systems shining with the force of 10,000 Cold War interrogations, security company booths manned by portly middle-aged dads with tucked-in shirts and serious The Man vibes, and cool security company booths with tatted-up salespeople and a jar of jujubes. There were law firms, travel companies, dispensary-specialized interior decorators, corporate advisors, and a booth run by Shoppers Drug Mart. There were massive, stainless steel extraction displays that asked, „what if Dr. Frankenstein Juul-ed?” There was a Japanese company selling handcrafted scissors perfect for trimming weed and grabbing attention by having an employee dressed in a full samurai outfit, (on my second day I would find him napping in his booth fully decked out in his samurai garb). There was a massive display for an industrial joint-rolling machine that was run by people decked out in sheer white clothes who looked less like they were in the weed industry and more like they were in the „growing-humans-in-an-amniotic-sac” industry. 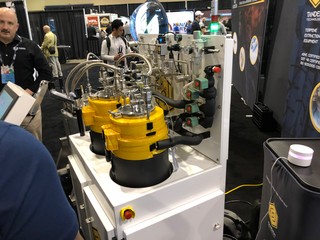 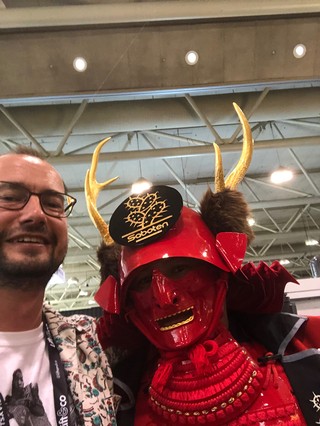 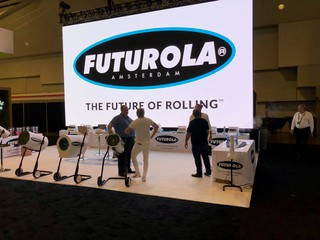 Most of the floor space was taken up by the companies involved in the growing, refining, and retailing of weed. If you live somewhere with more than 100,000 people you’ve probably seen their names and expertly-designed logos attached to summer concert series or beach parties or other whimsical, youth adjacent activities. Companies with names like Sundial, Aurora, Flexr, Valens, and Hexo set up displays that included a giant game of Battleship. There was an app that let the discerning smoker track his bud to the farm it came from and permanently running chocolate fountains. A terpene smelling bar. Oh, and of course there was swag. Sweet, glorious swag. Over two days I collected a candle, a sleep mask, a cool lighter accessory that helps you tamp down your joints, multiple notebooks, a dope pipe-cleaning set, and I finally found a hat that fits my tiny head and doesn’t make me look like an adult that was turned into a kid by some sort of ray.

What struck me about the cannabis companies—whether producers, growers or extractors—was how hard it was to tell exactly what they sold. Their branding and displays could have easily been for any hip, youthful product like Icelandic yogurt or an app that lets you know who in the room around you is recently divorced. Partly this is due to restrictions in Canada’s Cannabis Act that limits companies’ ability to market the actual product they sell. Pot brands are unable to „induce” customers, meaning they can’t say things like, “The most chill herb,” or “Very trippy bud.” (Not that they would ever use slang terms for the product as I was reminded every time I talked to a salesperson about weed and their response would include a tight smile and the forceful use of word “cannabis”.

This has left these companies in a state of existential confusion: how can they build a brand identity when they aren’t allowed to really talk about what they are selling? Some opted to highlight how big their companies are. Many of the growers kept talking about the size of their facilities and fields in comparison to where they were last year. They would tell me how they went from 35,000 acres to 120,000 acres and I—a man with limited spatial awareness who has to imagine three 12-inch rulers put together to remember how long a metre is—would nod along encouragingly, while saying things like, “Wow, that’s a lot.” It did seem like a lot. Like, I know Canada is a big country but based upon these growers hyper-excited growth projections I couldn’t help but picture a future country (well, the parts that aren’t on fire or underwater) that is entirely composed of only the GTA and endless cannabis greenhouses.

To exit this identity vacuum, it seemed like most of the companies have gravitated to the two pillars of modern capitalism: wellness and morality. Multiple companies trumpeted tree planting programs; where with every purchase of their product would result in a tree being planted. Truly we have reached peak slacktivism. I can’t wait for the next time I roll a fat joint and spend the next two hours trying to pick something on Netflix, serene in the knowledge that my THC-infused lethargy is actually an unassailable contribution to saving the world.

Lifestyle branding was ubiquitous at the expo. Companies with slogans like „Whole Plant, Whole You” and mommy bloggers were the stars of this show. The expo showed that in the post-legalization effort to remove any stigma from weed, it has been cleaned and rinsed of any culture or political force that it once had. Booths that trafficked in the signifiers of pot’s past—fantasy-novel glass bongs, Bob Marley rolling trays, pot leaf shaped grinders—stuck out like a sore thumb, if that sore thumb was also embarrassing because it had a pet snake and problematic dreads.

While much of the pothead culture of the past could be immature and aesthetically goofy, it’s what made pot so inviting as a teen. It was a culture my outcast friends and I could hop into as we debated the merits of my best buddy’s hand-carved chillum and listened to Pink Floyd. Sure, it’s hackneyed in 2019 but at least it is something; much better than what it has been replaced by in this transition from „weed” to „cannabis.” Because cannabis, as marketed at the expo, is merely another tool in the endless, postmodern quest to uncover the true and utterly fulfilled you. It is a flavor of self; a characteristic one can add to the Instagram-lifestyle brand you have meticulously built for yourself. I am a mindful condo-dwelling, yoga-practising, cannabis-user. 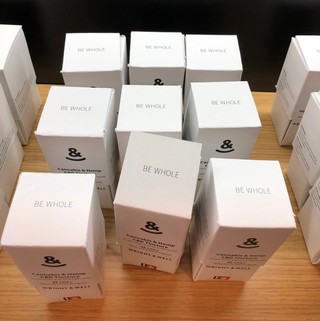 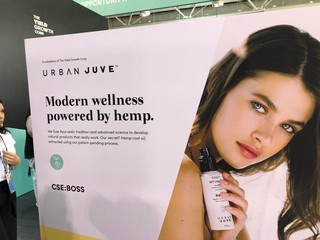 I felt like I was watching an industry run away from itself, like it was trying to cover up the smell of some quality dank with an especially pungent and douchey cologne. There was the head of one of Canada’s largest cannabis retail chains saying that he didn’t want to use the term „dispensary” anymore because it has too many negative connotations. There was the man from an upscale accessory line who admonished head shops for not understanding that branding was the way of the future. There was the even more upscale accessory line that sold goods that looked like Hannibal Lecter’s shaving kit. 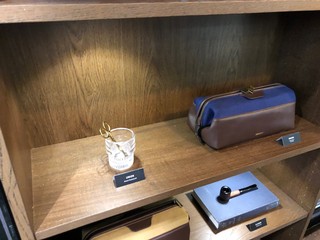 This isn’t to say that legalization is bad. It is to say that as I looked at who was present over two days at the expo—mostly white, Hitler Youth-coiffed frat boys; strikingly beautiful influencers attempting to find the perfect selfie; fridge-shaped investors with unbuttoned dress shirts, casually talking about being able to raise millions—it made me think about who wasn’t there: the activists who risked it all for accessibility to medical marijuana, the Black, brown and Indigenous people who were disproportionately jailed and criminalized as my friends and I debated the lyrical merits of Sublime, and continue to be treated as such even as capital and its blanched investors moved to profit from this „emerging” market. It is to say that as I listened to a representative from a large extractor company tell me that the market will soon be “80 percent oils and 20 percent dried leaf,” and a licensed producer tell me that they were working on infusing weed into sugar and salt, I saw it less as a potential stoner utopia and more as a dystopia where weed has become the Soma used to deaden a population addicted to streaming content from even the slightest spark of revolt.

It is to say that while weed won the battle for legality, it lost the war for its soul, and that just maybe I need to find myself a crinkled pop can.