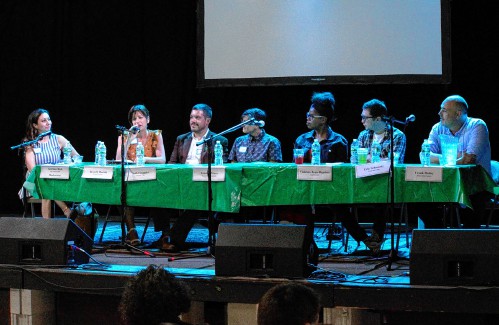 On Wednesday, Rep. Aaron Vega, D-Holyoke referenced the proposal, an idea he supports, hours before a panel on social equity in the cannabis industry.

“A lot of people who were in the black market and are now trying to get into the legal side, they don’t know how to do payroll, they don’t know small business administration,” said Vega, who added that the amount of money necessary to launch a marijuana business is “astronomical” and “prohibitive.”

The Cannabis Control Commission (CCC) has identified 29 towns and cities in the state — including Amherst, Greenfield, Holyoke and Springfield — that are disproportionally impacted by the “war on drugs” based on arrest rates for marijuana sales.

“When we talk about social justice and equity,” Vega told the Gazette, “Holyoke over decades has been disproportionately affected by the drug war — and we need to have those conversations.”

“When people hear the marijuana industry is coming to town, they immediately think of a dispensary, but that’s just one kind of license the state offers,” said Michael Kusek, an event organizer and founder of the magazine A Different Leaf, which will begin publishing in July.

With the CCC offering licenses for retail sales, manufacturing products, testing laboratories and transportation services, the summit is meant to show the broad range of businesses opening in Massachusetts, Kusek said. It is also an opportunity for entrepreneurs to give advice to those new to the industry.

“There is a real interest by a lot of cannabis business people in making sure that businesses of all sizes can participate in this new industry, from micro-businesses in Massachusetts up to multistate cannabis operators,” Kusek said.

“We want to make sure that people are aware that, if they want to get into the industry, there is an avenue,” he continued. “And if they are going to do that, they need support not just from the CCC but from their peers who have a lot of experience.”

The steep priceof starting up

The first panel, “Fighting the good fight, how the little guy survives,” featured cannabis business owners who are in different stages of licensing and operation and who shared their experiences in starting out.

Kristen Mara, co-owner of Pioneer Valley Extracts in Florence, said the high start-up costs to open a marijuana business and the lengthy application process are the two greatest challenges in entering the state’s marijuana industry.

“There’s a lot of time to pass, and you have to be building out your space and take on a lot of expenses, and you don’t know if you will have a license,” Mara told the Gazette prior to the panel discussion.

Mara and David Cichoki, her brother and company co-owner, began their application process a year and a half ago with the CCC, and they currently have their provisional license. Located at 43 Ladd Avenue in Florence, their manufacturing facility — which will produce oils, vape cartridges, tropical balms and tinctures — will need a final inspection before they can acquire their full license once the remaining equipment is installed.

The application process is “thorough and rigorous,” Mara said but added that the CCC provided guidance along the way, and she received help when needed. Since applying for a manufacturing license from the CCC, Mara said her brother has run a separate business, and she has worked as an attorney to finance their cannabis business venture.

“You have to act as if you are going into the business, and you have to get a space for operation and do all these things without any knowledge that you will be allowed to have a business,” Mara said. “You need a minimum of $50,000. To really launch and compete, you probably need a $1 million.”

Joining Mara on stage at Gateway City Arts were other marijuana businesses beyond the retail side of the industry. Eric Schwartz of Farm Bug Cooperative co-founded his business to deliver small Massachusetts farmers with operational support as they enter the cannabis industry. Seth Frappier founded Chronic Trips, a membership-based club in which “elevated adventure enthusiasts” participate in outdoor activities.

Frank Daily, founder of Boston Bud Factory, spoke about using the resources available from the CCC and how he sought out the Massachusetts Recreational Consumer Council for guidance. His company recently received its provisional license for a retail store and product manufacturing in Holyoke.

“The guidance available will walk you through the entire process,” Daily said. “Everyone thinks there’s no way to start a business. Go learn how to do it, and once you get the license, you can get the money.”

Panelists commended the CCC for being a helpful resource in guiding entrepreneurs through the licensing process. Shekia Scott, community outreach director for the commission, fielded questions at a booth on its social equity program.

The CCC is currently taking applications from eligible candidates for a free six-month program to teach participants the skills necessary for all types of licenses, Scott said.

To be eligible, applicants must meet one of the following criteria: live in one of 29 selected areas for at least five of the last 10 years that have been identified as area disproportionately impacted by the “war on drugs”; have a past drug conviction while residing in the state in the past 12 months; or be married to or be the child of a person who has been convicted of drug charges in the past 12 years.

“The program will provide knowledge, on how to operate in the business, that’s coming from the regulators,” Scott said. “What better guidance can you get in terms of compliance?”

In the second panel of the night, “Balancing equity in the Massachusetts Cannabis Industry,” Zaret announced that Easthampton​​​​​’s City Council will vote in August on an ordinance that would reserve three special permits for equity applicants, which are defined by the state.

“It’s opening doors — to women, to minorities, to veterans, both disabled and not disabled, to the LGBTQ community — by making sure that people in those groups, who are marginalized in all aspects of business, can come to Easthampton and have three licenses to apply for retail cannabis,” Zaret said.

Joe Gilmore, the director of community outreach for the Massachusetts Recreational Consumer Council, said that Easthampton is one of five model communities in the state with social equity policies for marijuana along with Somerville, Cambridge, Boston and Waltham.

“Those equity ordnances did not come out of nowhere,” Gilmore said. “They came out of a few dedicated citizens in town who really pushed the narrative of needing social equity within cannabis as it rolls out.”

Luis Fieldman can be reached at lfieldman@gazettenet.com.