CBD might have made history at the 37th Food & Wine Classic in Aspen earlier this month, but its headlining guest Martha Stewart wasn’t there to talk about cannabidiols. Instead, she presented “Summer Entertaining with Martha” where she demonstrated how to make a classic clambake, build a berry and biscuit desert and shake up three different boozy spritzers. At the end of her one-hour, comedy-infused Food & Wine Classic debut, she did field one question from an attendee to acknowledge her reputation as “America’s Cool Weed Grandma.”

“What’s your favorite thing to share with Snoop Dogg?,” she was asked.

“Well, um, maybe—maybe a little smoke,” Stewart replied, as the audience erupted in applause and laughter. “And not barbecue smoke! He actually does a good job at sharing his smoke with me, and I don’t even smoke!”

The all-too-common misconception that she consumes stems from her friendship with the legendary, cannabis-fueled rapper. Together they host an Emmy-nominated cooking show on VH1, which premiered in 2016 and is now in its third season as “Martha and Snoop’s Potluck Dinner Party.” 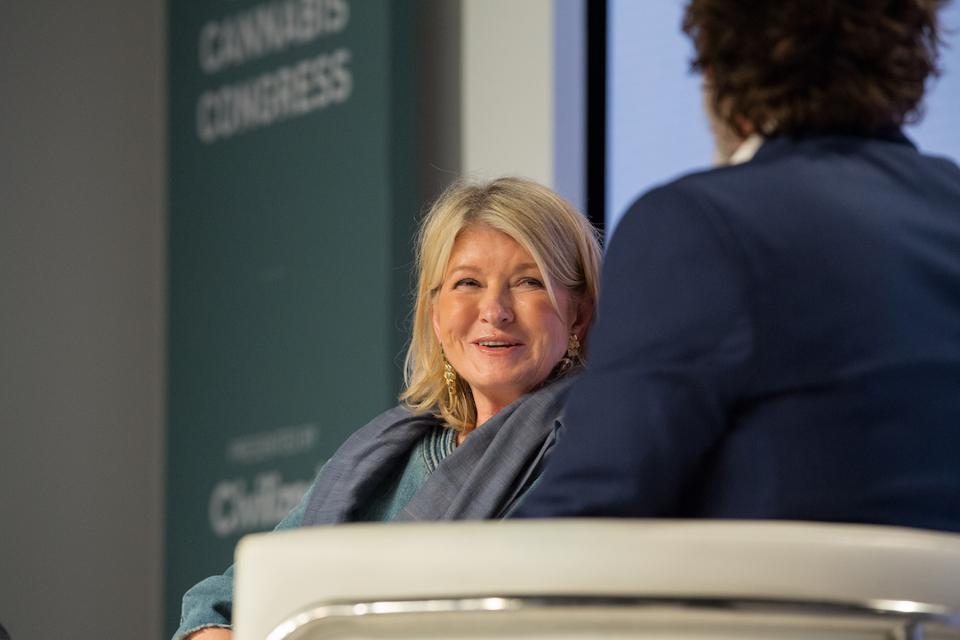 The day after her appearance at the Food & Wine Classic, she was on a plane from Colorado to Canada, where she was the keynote speaker at the second annual World Cannabis Congress (WCC) in Saint John, New Brunswick. This time, she’d been invited to talk about cannabis, specifically CBD.

The quaint, coastal town is home to Civilized, a cannabis lifestyle brand and multi-platform media company founded in 2015 by publisher Derek Riedle and his wife Terri, who’s the company’s CEO. In 2018, Civilized, which also operates a second office in Venice Beach, California, produced and hosted the inaugural WCC as „an invite-only, intimate way for the world’s top cannabis leaders and influencers to come together to move the industry forward,” explains Riedle. Chelsea Handler, who’s working on launching a self-branded line of cannabis, was the keynote speaker the first year. Soon after, Handler hit the road across Canada with Riedle for a two-month town hall tour.

“Cannabis consumers around the globe are desperate to see themselves in culture,” says Riedle. „They are desperate for role models. First, to have Chelsea, an outspoken entertainer that wasn’t then traditionally identified in the cannabis space was validation for the brand we’ve built and the type of event we set out to host here. The same could be said about Martha. What I love about her is that she is so mainstream—a lifestyle icon for generations now. For her to have the confidence to move into the CBD industry with the world’s largest cannabis company speaks volumes. Martha is preheating the oven, so to speak, for an entire new demographic to cook in.”

The company to which Riedle is referring is Canopy Growth, the Canadian cannabis conglomerate, which recently announced Stewart as an advisor for a new line of CBD products for people and their pets. The company’s CEO Bruce Linton appeared on stage with Stewart and Riedle to discuss the importance of growing mainstream partnerships.

“[The WCC is] a pretty serious event with people from all over the world,” says Stewart. „Everyone from researchers and scientists, from Israel and Europe, to editors and journalists. It was a very distinguished audience to address, and the response we received was thrilling. There was a real dialogue going on, and people are changing their attitudes and understanding more about [cannabis] than ever before.” 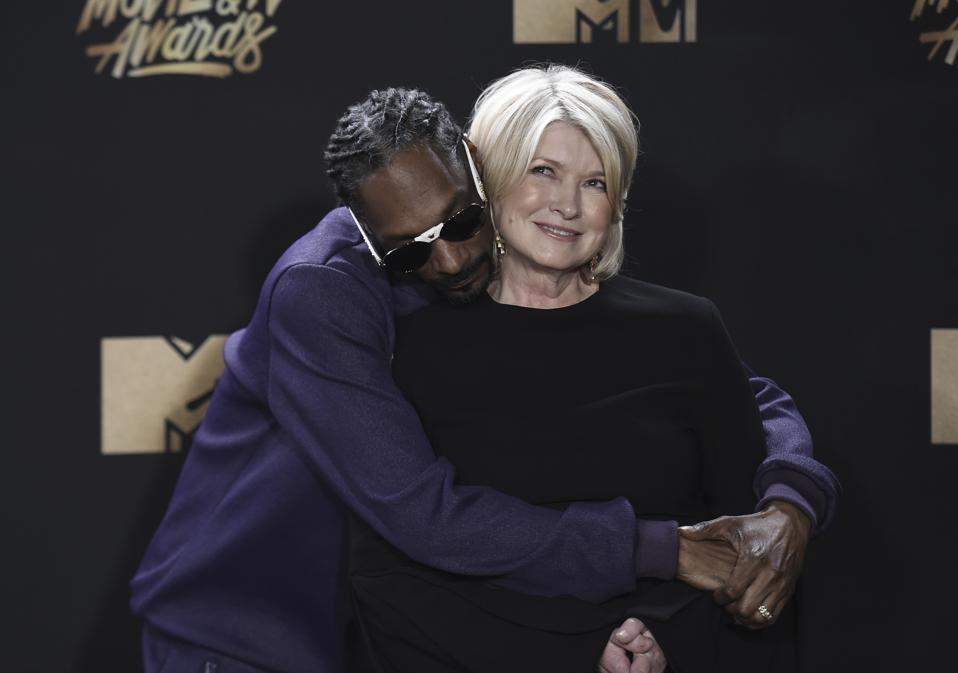 Snoop Dogg, left, and Martha Stewart pose in the press room at the MTV Movie and TV Awards at the Shrine Auditorium on Sunday, May 7, 2017, in Los Angeles. (Photo by Richard Shotwell/Invision/AP)

She credits her “good friend” Snoop for connecting her to Canopy Growth in 2018. (His cannabis brand Leafs by Snoop is under the company’s umbrella.)

“I first had a tour of their amazing facility up there and learned all about the work they are doing in terms of research,” says Stewart. „I always like to assess a company and Bruce is just a totally serious tech guy who’s very smart. What he has built in such a short period of time is amazing. The thought here was since my interest lies in animals and beauty, that it would be an advisory position in the CBD arena through a licensing agreement I will personally oversee. We are already working on the development of a sensible line of CBD products for dogs, and hopefully for cats, and then horses and larger livestock. I am very interested in their wellbeing and not keen on serving up pharmaceuticals.”

Known for her beloved Chow Chows, Stewart also has cats, chickens, miniature donkeys, birds, horses among menageries scattered across the property at her homes in Bedford, New York, and Seal Harbor, Maine.

“One little dog out of my five dogs [a French bulldog], who has a little anxiety — not much but a little — he gets a few drops of CBD oil every day and responds quite favorably,” shares Stewart.

Like most Americans, who continue to see the buzzword in headlines and on shelves everywhere, Stewart first discovered the nonintoxicating compound of the cannabis plant through her in-depth, daily news intake and through her cannabis-friendly friends.

“Every day is a discovery in this industry, and I am reading as much as I can. [Cannabis] is all around us now—and more and more states are [becoming] legal. At my house in Maine, I am allowed to grow eight plants of cannabis in my garden. It’s crazy! But I am not a [cannabis] farmer, and not planning on it,” Stewart assures. “I don’t use cannabis myself, personally, but have been using CBD facial creams and body lotions. There are some very high-quality ones in the marketplace right now that I like, so we will also be working on [CBD-based] beauty products.” 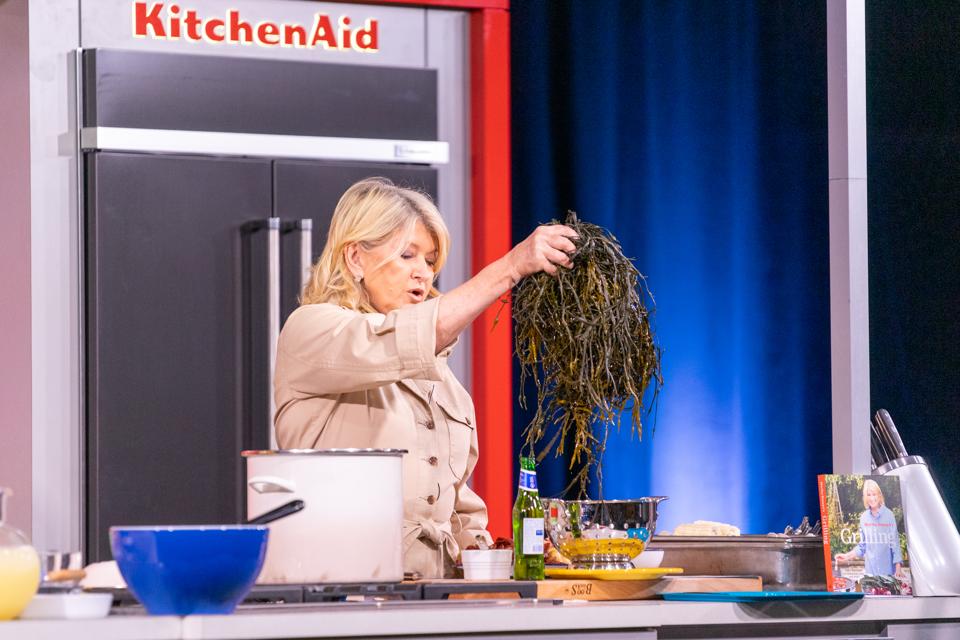 Martha Stewart hosted „Summer Entertaining with Martha” at the Food & Wine Classic in Aspen before jetting to Canada for the Civilized-produced conference.

But she’s most interested in CBD for wellness as it relates to the aging population.

“Not because I am old,” she says with a laugh. “But we’re all looking for new ways to improve our everyday living, and I, in particular, am dedicated to it through The Martha Stewart Center for Living.”

Operating in Washington Heights, New York in partnership with Mount Sinai, the eponymous hospital wing houses the Phyllis and Lee Coffey Geriatrics Practice, which is a primary care practice specializing in treating the health problems of older adults. Patients of The Martha Stewart Center for Living can also participate in activities and classes, including mindfulness-based stress reduction, nutrition planning, tai chi, yoga, fall prevention and someday, CBD product-based experiences. On Wednesday, Stewart will cut the ribbon to open her second location in Union Square.

Stewart, 77, adds, “By 2029, more than half of the U.S. population will be over 65 years old. And if CBD and cannabis can offer an alternative to other kinds of medicines—wow, how great will that be?”

As announced recently in Canopy Growth’s fourth quarter earnings report, the company is on track to start delivering Martha Stewart-stamped, hemp-derived CBD products to the U.S. market by the end of the 2020 fiscal year.

“As soon as you hear the name Martha, you know exactly who we’re talking about,” says Linton. „Martha is one-of-a-kind, not to mention a household name, who helps connect the cannabis and CBD industry with different communities than you’d traditionally associate it with. I am so excited to be able to work alongside this icon to sharpen our CBD product offerings across categories from human to animal, and to see where things go next for us. What her involvement does is breaks down barriers and encourages people to look at the plant differently — and maybe, hopefully — end up better understanding the value and potential benefits of cannabis and cannabinoids.”