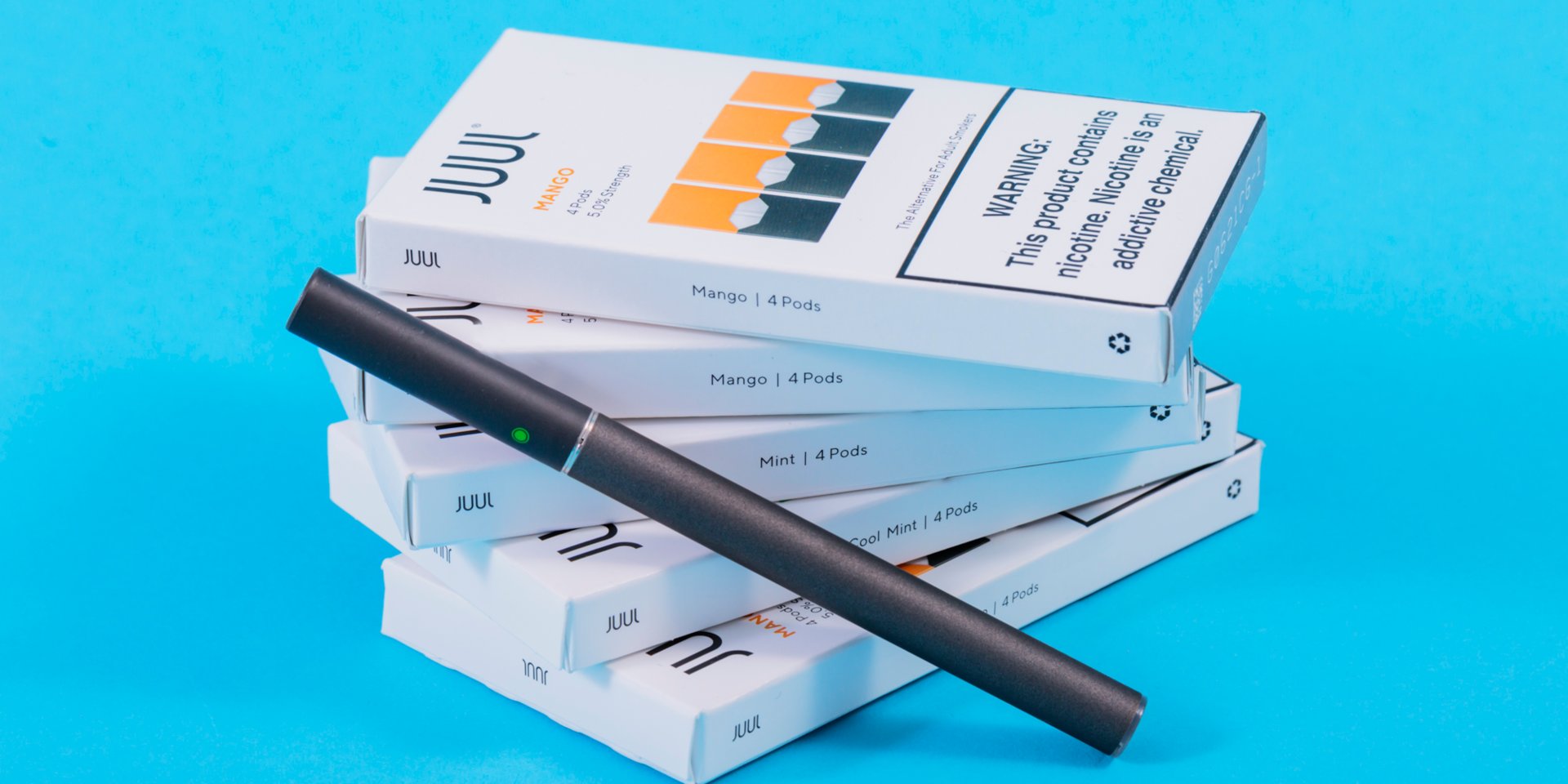 Walk though any college campus in 2019, and you’ll see half-awake students rushing to class in sweatpants, groups of friends huddled together preparing for an exam, and stacks of books piled up at the library. More and more often though, these sights and sounds are increasingly enveloped by a hazy cloud of vape smoke.

In dorm rooms, libraries, bathroom stalls, and even classrooms, students are exhaling puffs of fruity smoke from vaporizers and e-cigarettes.

Americans are smoking fewer cigarettes than ever, according to data released by the Centers for Diseases Control. But many have simply replaced their pack a day habits with vape pens. A John Hopkins report released last year estimates nearly 11 million Americans vape, and another study from the National Institute on Drug Abuse found that 37.3% of high school seniors said they had vaped sometime in the last year. With more students vaping on campus than ever before, and with near „epidemic levels” of teenagers getting hooked on nicotine, universities are quickly trying to adapt.

According to data collected by anti-smoking activist group the American Nonsmokers’ Rights Foundation, over 1,965 US universities have already implemented rules and regulations specially prohibiting e-cigarettes and vaporizers from their campuses. INSIDER reached out to several universities across the nation that all claimed to be clamping down on vapers, updating their policies, and offering resources to encourage students to quit. But are these measures working?

How common is vaping on campus?

The degree to which vaping is a problem depends largely on who you ask. Students on Reddit have complained of vapers „blowing huge billows of smoke” during lectures. As one parent on the same Reddit thread noted, the onus is largely on professors to monitor vaping, but that can be difficult when class sizes balloon to upwards of a hundred students. According to The Daily Cougar, the school paper of the University of Houston, vaping in class has become enough of a nuisance that professors have, „begun to explicitly prohibit vaping in their syllabuses.”

But that’s certainly not across the board. One former New York University student told INSIDER he actually openly vaped in class with his professor. For the most part though, several NYU and University of Texas students INSIDER spoke to describe a more nuanced situation, where vapes — especially PAX Labs’ Juul (the most popular brand of vape)— abound, but often just out of sight. Critics of Juul and other manufactures claim their fruity flavors are marketed towards children. Getty

While there’s no shortage of anecdotal stories of vaping on campus, actual hard research on the subject remains relatively sparse. In survey results released by the American College Health Association as part of its National College Health Assessment, only 12.9% of college students said they had used an E-cigarette in the past 30 days. When that same survey asked students the percentage of their peers they perceived had smoked in the past 30 days, though, that number jumped up to 79.9%. Katrin Wesner-Harts, who is the president of the ACHA and is working to limit vaping at universities, told INSIDER that this inflated perception of how many students are smoking may be playing a role in normalizing vaping on college campuses.

Whatever the actual number is, every student INSIDER spoke to described vaping as a common occurrence on campus. Alex Domb, a rising junior at New York University and a former reporter for NYU’s Washington Square News, is something of an expert on vape culture on campus. Domb told INSIDER that vaping, especially Juuling, is common on campus, but students usually stop short of explicitly smoking in class. INSIDER spoke to two NYU professors who both said they did not experience issues with students vaping in class.

According to Domb, the mere presence of a professor, even in large auditoriums, acts as a deterrent to dissuade vapers. As soon as the watching eyes are gone, however, arms raise up and smoke blows out.

Bathrooms and libraries are filling up with smoke

„I doubt most people actually find it cathartic to Juul openly and have to worry about hiding it when they can just leave and do it privately,” he said. „Students that are doing it [vaping] in lectures are doing it as a stunt for their buddies.”

Along with smoking in bathrooms, every student INSIDER spoke to said they’ve witnessed vaping in their schools’ libraries — especially near finals week when stress runs high.

In an article released last year by the University of Virginia student newspaper, the Cavalier Daily, one student described a scene of vapers taking over a library study room during finals week. „[In] the little glass rooms down here one of them looked like fog on the top of a mountain, just full of vapor,” the student said.

INSIDER spoke to a public safety officer at New York University’s Bobst Library who acknowledged that vaping does occur, but would not comment further. New York University did not immediately respond to emailed questions regarding vaping on campus.

„I’m not saying that it never happens but it has not been a persistent problem that I’m aware people have complained about,” said Arlene Weismantel, Senior Associate Director at Michigan State University Library.

Heather Stalfort the Director of Communications and Marketing at the John Hopkins University Sheridan Libraries, also said she did not believe Juuling in the library to be an overwhelming issues. Both schools said they had updated their no smoking signage in the libraries to specially reference vaporizers and e-cigarettes. At Michigan State, Weismantel said security officers patrol the library grounds, admonishing any vapers they manage to track down.

INSIDER heard back from several universities, each describing vaping on campuses as a rarity. So why then the discrepancy between universities and the students? Part of the explanation may be that employees and administrator working at these universities may not know vaping when they see it.

For universities interested in tackling vaping head on, Wesner-Harts of the ACHA, said it’s important to educate faculty and staff on what exactly they should be looking for. „The average employee in a library or a restaurant may have no idea.” As for the instances of professors and faculty members vaping on campus, Wesner-Harts believes it’s the responsibility of faculty members to know their university’s rules on vaping and abide by them.

In the meantime, schools are doing what they can to promote positive health practices.

The universities INSIDER spoke to, including Michigan State, Ohio State, and the University of Texas, have taken various steps to combat vaping, from updating non-smoking signage to clearly include e-cigarettes and vapes to declaring themselves a vape-free campus, to having security guards patrol for smokers. These universities have so far stopped short of more extreme tactics being taken at some high schools, where there are reports of schools installing bathroom vape detectors and even altering dress codes to keep teenagers from sneaking Juuls up their shirt sleeves. Ultimately, any wholesale enforcement on college campuses may remain elusive.

Some schools, like Skidmore College, have opted to ban tobacco products entirely. With up to 59 milligrams of nicotine in every Juul pod, many young users are invariably getting addicted to nicotine. Other schools, like the University of Michigan, offer nicotine cessation resources for faculty and students free of charge. In an email, Michigan State University spokesperson Emily Guerrant said the university implemented major changes three years ago, and considered them to be the „most health conscious policy for college campuses that [they] were aware of.”

And school policy can only go so far in challenging the popularity of vaping anyway. In an interview with the Lehigh University student newspaper, Sophia Closter, a member of the school’s Student Senate, echoed that sentiment.

„The school doesn’t have a right to take action until there is evidence that these will harm people,” Closter said. „Until then, nothing will happen to stop the usage. We can strongly encourage people to stop, but there’s nothing forcing or preventing people from using them for now.”