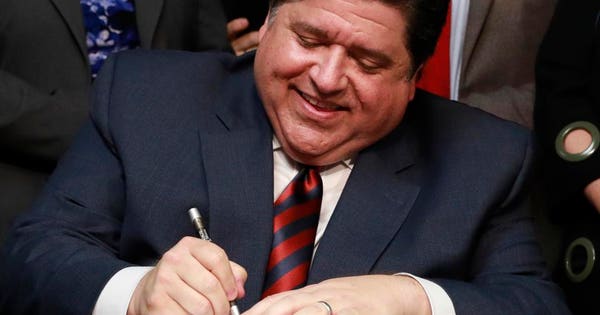 Gov. J.B. Pritzker at a bill signing event earlier this month. Gov. Pritzker is scheduled on Tuesday morning to sign a bill into law that would legalize cannabis for adult use in Illinois. (AP Photo/Amr Alfiky)

Today, Illinois Gov. J.B. Pritzker is expected to sign into law a bill that will make Illinois the tenth state (plus Washington, D.C.) to legalize marijuana for adults and regulate a new legal cannabis market. The bill’s passage and signing is historic because Illinois becomes the first state in the country to legalize cannabis through the state government rather than a citizen-led ballot initiative.

There is much to love about the Illinois bill, such as the provision that will result in the expungement of criminal cannabis convictions for 750,000 Illinoisans and some of the strongest social equity provisions of any legalization law in the country, but there’s a looming problem with Illinois’ legalization program that has been largely lost in the excitement around the bill’s passage.

Illinois is going to run out of cannabis.

It’s a simple, though avoidable, problem of supply and demand, and the aftermath will create serious challenges for the state’s cannabis industry, adult-use cannabis consumers, and patients who use cannabis for medical purposes once the law goes into effect on Jan. 1, 2020.

It might sound absurd that an entire state would run out of a product that grows, well, like a weed. But the Illinois General Assembly has all but guaranteed that it will happen by adopting a licensing structure that is woefully inadequate for a state with a massive resident and tourist population.

To be fair, product shortages are typical in states with new adult-use programs, as evidenced by the following headlines from the early days of legalization in Colorado, Washington, and Nevada:

Of course, who can forget when the governor of Nevada issued a statement of emergency because there were not enough distributors to supply the newly licensed adult-use dispensaries? The press had a field day, incorrectly reporting that a cannabis shortage caused a “state of emergency” in Nevada. Albeit sensationalized, the product shortage was very real.

But Nevada, Washington, and Colorado all have vibrant cannabis markets today. These states not only solved their supply shortage issues, some have experienced the opposite problem of oversupply, which has put downward pressure on pricing at the wholesale and retail level and in some cases is even driving smaller producers out of business.

Some will assume Illinois, like the states before it, will recover quickly from an initial product shortage. But that will not be the case in the Land of Lincoln. Because of the licensing structure adopted in Illinois’ legalization bill, product shortages in the state can be expected to be more drastic than any other state’s roll out and will likely last for months or years after implementation.

To start, only the existing medical cannabis businesses will be allowed to cultivate, produce and dispense cannabis. On the retail level, that means 55 existing stores will have to meet the demands of a 13 million-person state with a massive tourist population. Each of these existing operators will be allowed to open a second store, but the realities of real estate site selection, permitting and build out means that none will likely open before adult-use sales begin on Jan. 1, 2020, and most won’t come online until mid 2020.

But the biggest problem will be the lack of production capacity in the state. Illinois currently has a small medical cannabis program, with a current patient population of around 70,000, when compared to most states. The state has issued 19 production licenses, controlled by fifteen businesses (including my own company, 4Front, which operates a cultivation facility in Elk Grove Village) to cultivate and produce cannabis for the state’s dispensaries. These businesses will all be allowed to transition to serve the adult-use wholesale market in time for sales to begin on January 1.

The immediate problem is that these businesses have built a physical production infrastructure designed to meet the demands of a 70,000-person medical market. They are nowhere near equipped to meet the market demand for 13 million residents and 58 million annual tourists to Chicago alone.

Sure, these businesses will scale up production as much as possible. But with adult-use sales starting in only six months, it will be impossible for these businesses to ramp up enough to adequately meet this demand. Construction alone for a project of this size can take over a year, not to mention procuring all the necessary zoning and permitting approvals. Once construction is complete, the cultivators will still need to grow the plants, a process that takes around three months under the best conditions. Much of the cannabis grown will be extracted into oil and turned into edibles, topicals, vape pens, and other infused products, adding more time to get product to market. This doesn’t account for crop failures, pest infestations, or inferior product that is often a result of cultivating in a new or expanded environment.

With only fifteen businesses holding nineteen licenses to produce before the start of sales, we can expect to see stores selling out of adult-use cannabis in record time, with some stores likely to open and sell out on the first day of sales, only to have to shutter their doors until more product makes it to the wholesale market. When product is available, stores will have no choice but to artificially limit customer purchases in order to manage inventory and try to avoid having to close.

And of course, the laws of supply and demand dictate that such a massive undersupply will lead to record high prices in both the adult-use and medical markets. It is entirely possibly that for the foreseeable future, Illinois will be known as the home of the $800 retail ounce.

Don’t expect these product shortages, small purchase limits, and sky-high prices to go away any time soon. That’s because the state will not issue large-scale cultivation licenses to any businesses outside of the existing medical cultivators. These 19 licensees will each be allowed to operate a maximum of 210,000 sq. ft. of cultivation space. That may sound like a lot of cannabis, but one independent firm hired by the state of Illinois to evaluate supply and demand in the state found that existing licensees will fall far short of meeting demand for cannabis in the state.

This also assumes that these 19 licensees will all meet their 210,000-square-foot allotment, for a total square footage of 4.2 million, something that simply will not happen. Each license is limited to a specific geographic region and can only be located at one physical site. All the current cultivators have put significant investment into building their medical cultivation sites, meaning they are largely locked into staying at their existing locations. Some of these have physical footprints far less than their maximum allotment. And, of course, building out more than 200,000 sq. ft. of canopy comes at a cost of $15 million to $40 million depending on the type of construction and equipment. With the lack of access to institutional lending caused by federal prohibition, many of these businesses simply will not have the capital necessary to build that much capacity and will have to scale up in tiered phases as they use cash flow from wholesale sales to continually expand their production.

There will be no saving grace from new licensees coming online soon after these existing medical producers. Rather than significantly scale up licensing like every other adult-use state to date, Illinois chose to grant only 40 new cultivation licenses in 2020 and 60 more in 2021. These “craft cultivators” will be limited initially to only 5,000 sq. ft. of production space. And it will take years for some of these to get operational due to the same permitting, construction, and capital challenges faced by the larger operators.

Simply put, it is going to be years before there is close to enough supply in Illinois to meet market demand and bring down pricing. While the Illinois legislature and governor fully deserve all the praise they have received, and then some, for the political courage they showed in being the first to legalize cannabis, the reality of the current licensing structure means it will be extremely lucrative for those businesses fortunate enough to have one of the few licenses in the state. But for those looking to legally enjoy cannabis in Illinois, be prepared for long lines, high prices, and small purchase limits for the foreseeable future. Unfortunately, for far too many Illinois cannabis consumers, the illicit market may remain their only consistent option to purchase cannabis for years to come.