It is wise to know where your cannabis comes from. Intoxicated by bullish demand forecasts, pot investors aren’t paying nearly enough attention to supply.

U.S. states currently decide whether to legalize cannabis within their own borders, even though the drug remains illegal at the federal level. It is a misnomer to speak of a single U.S. pot industry, considering the patchwork of self-contained cannabis economies across the country.

Pot can’t cross state lines today, even between two states where the drug is allowed. Should federal laws change, high-cost growers and areas with less favorable climates for cannabis growing will be undercut. 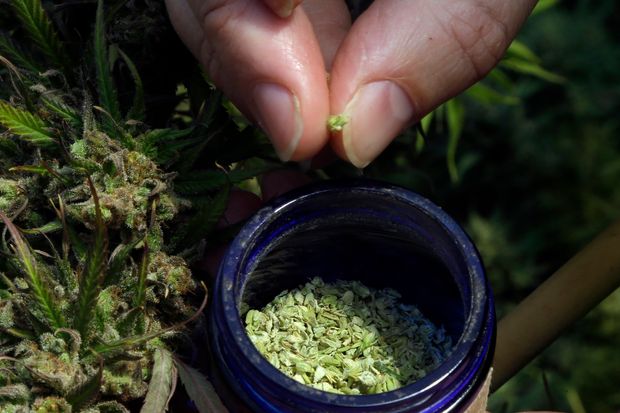 Pollen is removed from a hemp plant at a facility in Springfield, Ore. Photo: Don Ryan/Associated Press

“There will be upheaval in the price structure and efficiencies are going to set in,” said Steve Schain, senior counsel at cannabis law firm Hoban Law Group.

Oregon is ready to roll. This week, lawmakers in the West-coast state signed into law a new bill that would allow local cannabis growers to export over its borders if and when federal law permits. This oversupplied state could quickly flood the market with cheap crop.

When adult use was legalized in Oregon four years ago, too many growing licenses were issued. That has led to excess inventory—6.5 years’ worth, according to a 2019 Oregon Liquor Control Commission report. The price paid by consumers for usable marijuana has more than halved to less than $5 a gram in the past two years.

States like Oregon that legalized marijuana a while ago tend to have lower prices. Take pre-rolled joints: Washington is one of the cheapest states in the U.S., at $5.50 a gram. California and Nevada, both legalized within the last two years, are pricier at $9.60 and $14 a gram respectively, according to cannabis data company Headset. In some states, weed can be artificially expensive because licenses have been handed out carefully, meaning less competition among growers.

It is tricky to judge how things will shake out if internal trade barriers come down. Some growers could benefit: The current need to cultivate cannabis in individual states to serve the local market is highly inefficient. Producers with operations in multiple states would be able to consolidate in regions with the consistently sunny conditions that the cannabis plant likes. Acreage Holdings, a large U.S. cannabis business with a stock-market value of $1.8 billion, has growing facilities in several northern states that aren’t ideal for growing. Cultivation will likely pivot south, hollowing out growers in colder states like New York. State licenses to grow in Florida—where few have been handed out—already change hands at a premium.

Given how chaotic this process is likely to be, and the fact that cannabis stocks are already highly volatile, it may be safer to back companies that provide services to growers but don’t actually “touch the plant.” For example, Scotts Miracle-Gro supplies pot farmers with fertilizer; KushCo Holdings offers packaging.

Investors aren’t paying heed: Since the start of 2018, $3.5 billion has been invested in cultivation and retail marijuana companies based in the U.S., according to data from cannabis investment bank Viridian Capital Advisors. Far less is flowing into cannabis consumption equipment or specialized industry software, which attracted capital worth $600 million and $210 million respectively over the same period.

Granted, it may be several years before interstate trade is possible. Even after federal restrictions are lifted, protectionist laws at the state level may cushion the blow for domestic growers for a time. In the long run, however, a lot of U.S. cannabis growers will find they are in the wrong place. Investors plowing money into pot production better be prepared for the reckoning.

Write to Carol Ryan at carol.ryan@wsj.com