The musky aroma hits you from the car park at the headquarters of Canopy Growth, the world’s largest cannabis company.

Inside this nondescript warehouse – an abandoned Hershey’s chocolate factory – in Smiths Falls, about 50 miles south-east of Ottawa in eastern Ontario, Canada, awaits the stuff of a stoner’s wildest dreams. Myriad grow rooms teem with row upon row of bushy marijuana plants at various stages of maturity, under intense lamplight, swaying in the breeze of dozens of fans.

A staff member wheels past crates full of pre-rolled joints in their hundreds. Another trolley holds 25 large bags of high-grade dried cannabis bud, a kilogram each, with a combined value of roughly C$250,000 (£150,000).

If anyone is the Willy Wonka of weed, it’s Canopy Growth’s co-chief executive, Bruce Linton.

Talking a mile a minute, his eyes gleam as he walks the halls of a facility that cost C$150m to build. “When I started it was officially the world’s worst idea, because there was no market,” he said. “There were no regulations and there were officially no patients. I was reluctant to tell my mother I was starting a cannabis business. Now she’s a cannabis patient, she’s like a drug dealer advising all her friends.”

In a timely illustration of how far the business – and the image of cannabis – has come, he takes a call from America’s home economics queen, Martha Stewart. Canopy has a deal with Stewart that envisages cannabis-infused chews for anxious pets. “Martha, you’re gonna hate this, I have to call you back.”

Canada legalised medical marijuana in 2001, but the recent weed boom was fuelled by a regulatory change in 2013 that effectively created a commercial market. Dozens of countries, including Germany, have brought forward their own medical marijuana legislation.

In 2018 Canada became the second country, after Uruguay, to legalise recreational use.

By catching the green wave, Linton has built, in under six years, a company valued by the stock market at £11.5bn, positioned to be the number one global player.

Though Canopy has yet to make a profit, revenues reached C$225m last year. More than half comes from its recreational cannabis brand Tweed, even though legalisation only took hold halfway through the year.

Its success is also transforming Smiths Falls, a former manufacturing town that was down on its luck. “Smiths Falls is very conservative,” says Tracy, who runs a taxi business. “The devil himself could be running as a conservative candidate and he’d win. Some people thought, ‘Oh my God, we’re gonna be growing pot?’ It’s employing so many people that there’s no opposition now.”

Built by the same Ontario folk who laid railroads and dug canals, Smiths Falls had lost big employers such as RCA, which pressed the first Beatles albums sold in North America. The Ontario Hospital School, a Stanley tools plant and a metalworks all followed suit, with Hersheys dealing the final blow by upping sticks in 2008.

The deputy mayor, Wendy Alford, used to work at Hersheys on the Reese’s Peanut Butter Cup production line. She says that Canopy Growth taking over the site has been “life-changing” for the town.

The company employs 1,300 people, about 800 of them Smiths Falls residents, close to 10% of the population. There are indirect economic benefits, Alford says. “Their security trucks needed new tyres, so they all go over to Hank’s Tyres and that’s just made his year. He’s hiring new people.”

Some of the early staff have been enriched by stock options granted when its shares were worth 100th of today’s price. It’s like the Silicon Valley tech boom, albeit on a smaller scale. 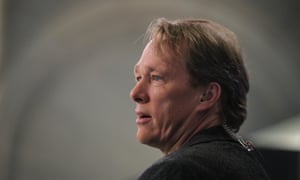 Bruce Linton, the founder and co-CEO of Canopy Growth, on the floor of the New York Stock Exchange in March. Photograph: Brendan McDermid/Reuters

Alford admits that weed wealth has gentrified Smiths Falls to a degree, pricing lower-income residents out of homes they might once have been able to afford. But there appears to be precious little obvious dissent about Canopy’s presence. The ongoing debate over whether the town should have angled or parallel parking is a far more divisive topic.

Linton would like to replicate the Smiths Falls revival in Britain, where the firm has a foothold. Canopy owns a UK subsidiary, Spectrum Biomedicals UK, and recently spent £43m on the beauty firm This Works, with an eye on a range of products infused with CBD, the non-psychoactive component of cannabis that has become a global health trend.

Canopy also has a partnership with the Beckley Foundation, the campaign group that has long promoted drug policy reform and engaged in pioneering research into psychedelic substances.

One thing Canopy hasn’t done is serve many prescriptions in the UK. In November last year, after a long-running campaign fronted by the parents of children with severe epilepsy, the law changed to permit medical cannabis, albeit in very tightly controlled conditions that campaigners and the industry say are unduly restrictive. A specialist must write a prescription before the product can even be imported. There are a handful of patients and Canopy has supplied one of them. 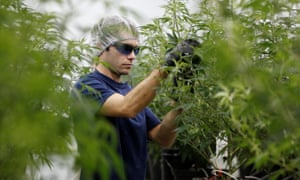 Some of Canopy’s smaller rivals have made donations to the MP-run Conservative Drug Policy Reform Group to spur change. Canopy says it hasn’t spent a penny to shift politicians’ mindsets in the UK, but it has talked to them.

Like many in the industry, Linton also touts cannabis as an alternative to opioids, the heroin-like prescription painkillers that have spawned legions of addicts and caused overdose deaths, particularly in the prescription-happy US and Canada.

While there is anecdotal evidence that cannabis can treat pain, insomnia, anxiety and nausea – among other conditions – there is limited information from clinical trials to prove its benefits. One reason is that pharmaceutical companies have little incentive to test products they cannot patent.

“It was never taught in medical school and didn’t come through a process of inventing a molecule and testing if it kills people,” says Linton. “The objections are always the same, that we need studies. We reference 71 peer-reviewed studies, we’re doing our own studies, we have now data from 80,000 patients that have been with us up to six years. People find that they get relief.”

Canopy’s customer network presents a golden opportunity to collect data about its patients and product.

The growing operation uses state-of-the-art technology to trace every product back to its mother plant. Artificial Intelligence plays a part in keeping the high-powered lights on at the right time and ensuring even temperatures. 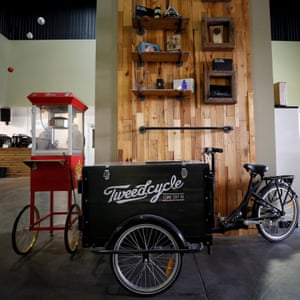 Security is tight, too. There is a vault licensed to carry C$150m of product, to which just seven people have the code.

The 150,000kg of cannabis produced every year, here and in its other vast greenhouses, goes out in armoured trucks manned by security guards with guns. Each truck could be carrying a load worth up to C$25m, ranging from the traditional dried bud similar to that found on the street to cannabis oil and pharmaceutical-style gel caps.

Legislation is expected to come into force this December that will permit expansion to include cannabis-infused drinks, vaping pens and edibles such as gummy bears and chocolate. These products will end up in Canada’s growing network of cannabis shops, pristine retail spots more reminiscent of the Apple store or high-end parfumiers than dens of iniquity.

But breaking America is the biggest prize in the near future. Canopy recently signed a C$4.5bn deal giving it an option to buy the US cannabis firm Acreage, putting it in pole position to grab a slice of the US if it opens up further.

While many American states now permit both medical and recreational cannabis use, federal law still prohibits it. And that’s an impediment to raising money through the tightly regulated banks, not to mention building a presence that crosses state lines.

The importance of the US to Canopy’s future is one reason that Linton won’t say whether he is the type to get high on his own supply. He’s a frequent visitor to the US, where acknowledging the use of cannabis can still cause friction with border officials. “If you go to the south, you’ve never heard of cannabis, that’s my advice.” 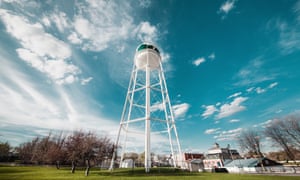