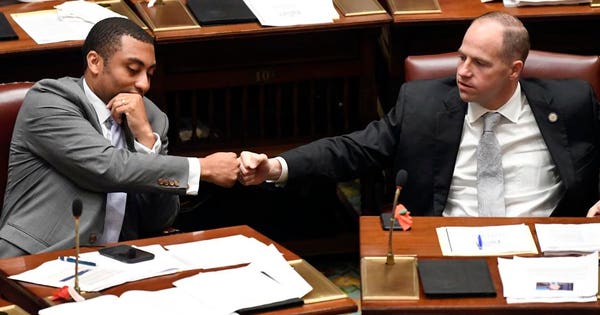 Albany, New York – As the New York legislative session in Albany drew to a close, legalizing cannabis failed to come to fruition. However, state lawmakers did pass a bill decriminalizing possession of fewer than two ounces (56.7 grams) of marijuana.

Senate Bill S6579A of the 2019-2020 Legislative Session “relates to vacating records for certain proceedings and modifies the definition of smoking.”

“Supplemental” Senate Bill S6614 “relates to vacating records for certain proceedings.” The legislation expunges a myriad of marijuana-possession misdemeanors and reduces penalties for marijuana possession of fewer than two ounces.

Section one reduces the penalty for unlawful possession of marihuana and renames the offense.

Section two amends the definition of criminal possession of marihuana in the fifth degree, reduces its penalty, and renames the offense.

Section six allows for the expungement of records.

Section seven establishes procedures for the expungement of records.

Section eight amends the definition of “smoking” under the public health law includes the smoking of marihuana.

Section one of the chapter amendment amends the criminal procedure law to clarify the process for vacating a past conviction when there are severe or ongoing consequences.

Section two of the chapter amendment makes clarifying changes to the criminal procedure law regarding expungement of records.

Section three of the chapter amendment makes technical changes to the criminal procedure law and clarifies the time frame during which prior records must be deleted.

Section four of the chapter amendment makes clarifying changes to a provision of the criminal procedure law regarding the process for expunging records.

Legalization advocates, including the Drug Policy Alliance (DPA) and the National Organization to Reform Marijuana Laws (NORML), elucidate that the latest revision of the expungement aspect of the bill falls far short.

“It harms immigrants,” claims Mary Kruger, Executive Director of Roc NORML, based in Rochester, New York. “It leaves us asking many questions about how the complicated/costly process of expungement is going to be covered and done automatically by the State,” which the Marijuana Regulation and Taxation Act (MRTA), known colloquially as the Greene Bill would do. “We are eager to hear more about what the State has planned in this respect. It also leaves so many aspects of marijuana a criminal activity, and therefore, the bill is only ‘decriminalization’ in name only. It is not decriminalization in authentic practice, which can only be accomplished through legalizing and regulating,” Kruger continues.

Advocates want to ensure that New York’s leaders do not get away with making the outcome appear to be a win, “because it isn’t,” Kruger insists.

“This isn’t a victory lap; it’s far from over,” said Sen. Jamaal Bailey (D-Bronx), who sponsored the decriminalization bill but had hoped to see cannabis fully legalized for his constituents.

“This war on drugs . . . ravaged communities like mine in The Bronx,” he said. “Eighty percent of the people statewide who are arrested for marijuana possession happens to be black and Latino.”

Concerning the “decrim” bill, the latest version viewed at press time re-regulates “smoking in public” and “public possession” of small amounts of cannabis from being misdemeanors to violations.

However, implementation is left mainly up to the discretion of law enforcement. Advocates subsequently fear this caveat will lead to racial disparities in cannabis arrests in the Empire State to continue with impunity.

“As long as a state has for-profit prisons, those prisons will need a non-violent, compliant labor force,” says Amy Povah of the CAN-DO foundation. Povah was formerly incarcerated for refusing to help implicate her then-husband. President Clinton eventually pardoned her.

“It’s illegal if you want to use it for adult purposes, but we accept it for medicinal purposes. It’s the most bizarre example of cognitive dissonance that I’ve ever seen when it comes to drug policy.”

Both decriminalization bills passed both Houses; however, they have yet to be sent to the executive chamber to be signed. Gov. Cuomo has promised to sign the Assembly’s companion decriminalization bill. However, during the 2017-2018 Legislative session, when the Legislature passed bill S5629 relating to conditions permitting the use of medical marijuana, which expanded coverage for veterans, Gov. Cuomo waited until Veterans’ Day to sign it.

“Gov. Cuomo essentially held veterans hostage for several months, for political gain,” claims Troy Smit, of Empire State NORML. “Therefore, it stands to reason that the Governor will hold off on signing the latest bills, depending on how he can politicize them to his best advantage.”

Not surprising considering the Governor only came out in tenuous favor of legalization to eviscerate his opponent’s campaign.

A representative for the governor could not be reached at press time.