Medical cannabis patients say recreational pot legalization has made it harder to obtain their medicine: Survey

Medical marijuana patients in Canada believe it’s getting harder to access their cannabis now that recreational pot is legal in the country. According to a recent survey jointly commissioned by Canadians for Fair Access to Medical Marijuana, the Arthritis Society and the Canadian Pharmacists Association, one in four medical cannabis users say supply issues are hindering their ability to access the medicine they need. As a result, 64 per cent of medical cannabis users are either under-dosing or stretching out their supply. One other key finding from the survey: just as many patients access their medical cannabis via mail order from a licensed producer (38 per cent) as they do via the illicit market (37 per cent).

Is Ontario making up excuses when it comes to capping the number of pot shops in the provinces? That’s what Bill Blair, Canada’s minister of border security and organized crime reduction, is saying after Ontario blamed the federal government for lingering cannabis supply issues for limiting the number pot retail stores.

„The data is clear: there remains enough supply to meet and exceed combined retail sales. After months of blaming an inept approach on a non-existent supply shortage, the Ontario government finally issued a limited number of licences using a lottery scheme in April,” Blair said in a statement to the CBC News. Ontario announced it will issue up to 50 new private cannabis store licences on Wednesday.

Michigan appears set to become another cannabis hot spot after the state’s officials allowed recreational marijuana smoking lounges, festivals and home delivery to operate under a set of emergency rules released on Wednesday. According to MLive, these rules will outline how Michigan’s new adult-use market will function, how the business licence application process will work and how the recreational and medical marijuana industries will interact with each other. The emergency rules expire in six months when the state Marijuana Regulatory Agency begins accepting business license applications.

23
— The number of cannabis stores in Ontario after the Alcohol and Gaming Commission of Ontario gave the green light to Canopy Growth’s Tokyo Smoke to open a store in Oshawa pending a pre-opening inspection. 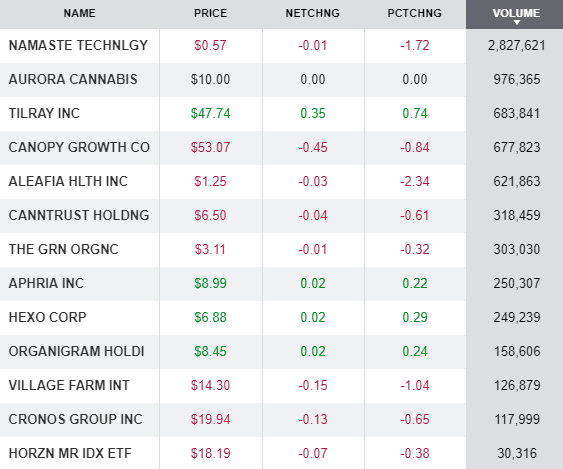