A city report shows the 10-metre rule created last fall led to the „unintended consequence” of an increase in cigarette butt litter in commercial areas. (The Canadian Press)

The sight and smell of cannabis is responsible for a tiny fraction of smoking complaints since being legalized in October 2018, a new City of Edmonton report shows.

When the city started talking about adjusting bylaws to prepare for legalized recreational cannabis in October 2018, McKeen didn’t expect a noticeable change in use or behaviour.

McKeen said city administration was instead preparing for the „cannabis apocalypse” or „reefer madness.” 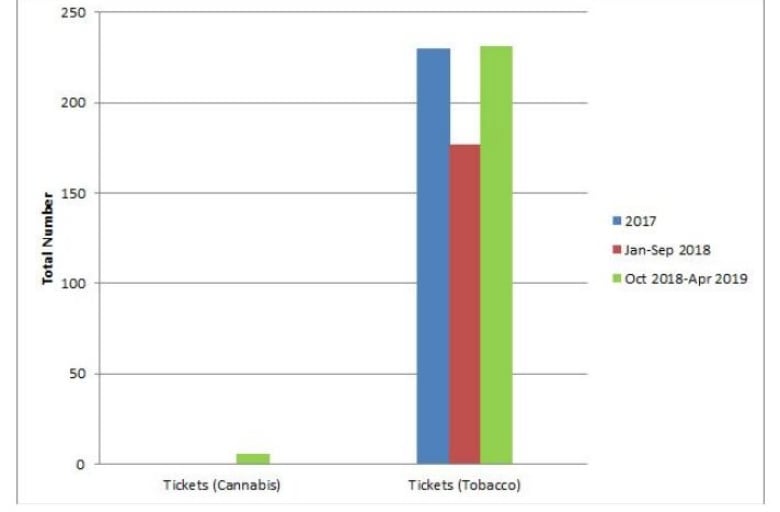 City bylaw issued six tickets for infractions related to cannabis use, compared to 231 for tobacco use between Oct. 2018 and Apr. 2019. (City of Edmonton)

McKeen said since October, he’s had almost no complaints from constituents about cannabis use.

„If you’ve ever been camping way out in the wild, natural area, the background noise you get at night, that’s what I’ve been hearing. Crickets.”

The report also states that while the city received 2,567 complaints about smoking, only 120 of those were directly related to cannabis.

McKeen noted that most people in entertainment districts in the evening — where drinking and smoking are more likely to occur — are not complaining.

„If you’re walking down Jasper Avenue or Whyte Avenue after nine o’clock at night and you experience that smell, or a door opens and you smell beer, that’s not out of context,” he suggested. „So maybe that’s why we haven’t had a lot of complaints.”

Cigarette butts are another matter.

When the city changed its smoking bylaw in October and created the 10-metre rule, it removed nearly 200 ashtrays near bars, restaurants and retail shops.

The report released Thursday confirms what CBC News reported in February — that removing and relocating ashtrays prompted smokers to butt out more on the ground.

„An unintended consequence has been an increase in cigarette butt litter in some commercial areas,” the report states.

The 124th Street Business Association said cigarette litter at bus stops has been a „major issue.”

The city is now exploring options to „increase waste receptacles without adding to any public confusion about where smoking is or is not permitted.”

Since the bylaw came into effect last October, the city conducted several awareness campaigns, including „Share the Air” designed to explain the new rules.

Administration plans to give city council an update on the program’s progress in early 2020.