Many cannabis users and businesses are invested in the idea of cannabis as an anxiety treatment. The position invites skepticism: marijuana companies have a financial interest in promoting a maximalist view of the drug’s benefits, and in patients it can look like a rationalization for excessive use.

As with other health conditions, the available research is inconclusive and limited due to decades-old restrictions on medical marijuana research. To sort through some of the ambiguities surrounding cannabis and anxiety, I spoke to Jordan Tishler, a Boston-area doctor who has a cannabis-focused practice.

One of the first things to keep in mind, he said, was the difference between anxiety and stress. Stress is a response to difficult situations such as a sub-optimal job or difficulty in one’s personal relationships. Many people who think of themselves as self-medicating for anxiety are actually self-medicating for stress. While this may be OK in the same context as an after-work cocktail, it may also enable users to avoid taking necessary steps to improve their lives.

Anxiety, Tishler said, referred more to a disorder when feelings of worry or distress arise for no specific reason. Fewer people take medical marijuana for generalized anxiety disorder (GAD) than stress, and the research about whether it works “is all over the map”. 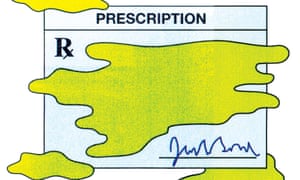 “If you ask the average cannabis aficionado how you treat anxiety they will say they smoke throughout the day, ‘whenever you feel something’,” Tishler said. “That’s not the way we physicians approach something.”

The little research that does exist on the topic lacks specific information such as how much cannabis people take (dosing) and when in the day they ingest it. Additionally, the proportion of THC and CBD content of the product the subjects use is not clear. This makes it very difficult to gauge the drug’s efficacy. “People are very bad at reporting this stuff accurately,” Tishler said.

For those who take cannabis to relieve physical pain, it’s difficult to separate the intoxication from the desired benefit. But with anxiety, Tishler suggested the two could be distinguished. For example, ingesting a small amount of cannabis before bed can “create an [anti-anxiety] effect that outlasts the intoxication”. He suggested taking it in this way could also reduce the potential harms of an all-day habit, which range from lack of productivity to something more like cannabis dependence.

Smoking gun: should you be able to use a firearm while stoned?

One of the driving forces of US cannabis legalization is the hope among military veterans that cannabis may relieve PTSD. “PTSD and generalized anxiety disorder have a lot in common,” Tishler said, and based on his practice he believes cannabis can be an effective treatment for PTSD. However, there is an added concern that veterans, in his experience, seem more likely to become heavy cannabis users very quickly, in part because they’re relying more on advice from their peers than their doctors.

Jonathan Avery, the director of addiction psychiatry at New York-Presbyterian hospital’s Weill Cornell Medical Center, didn’t dismiss the idea of cannabis as a treatment for anxiety, but he was more cautious. “We all know patients who have experienced relief from marijuana,” he said. But he said patients were more likely to have a good outcome with a psychiatric approach that can involve talk therapy and/or pharmaceuticals.

“It’s always complicated,” he said. It might help patients feel better but frequent users may be medicating the symptoms of cannabis withdrawal rather than anxiety. “And the evidence for marijuana’s benefits is not strong,” he noted.

But for some whose mood states and professional lives revolve around cannabis, more research isn’t necessary. They consider a plant, and especially this plant, inherently superior as medicine to a pill, just as almost all western doctors and virtually everyone else involved in healthcare believe the opposite. As with so many issues involving medical marijuana, the question is far from settled. And billions of dollars could change hands if the claims of cannabis boosters prove true.