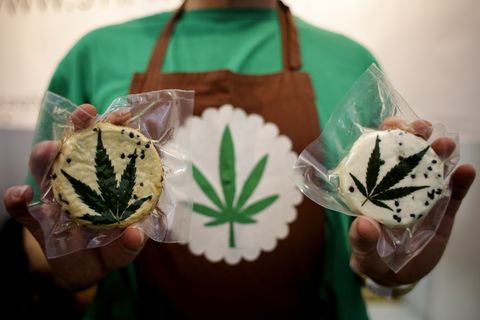 As swiftly as it worked its way into the zeitgeist, CBD-infused food and beverages are out in NYC. But this time, it’s not via the natural flow of things. Five months after the New York City Department of Health announced a ban on CBD food and beverages in restaurants, the move’s been executed, per Gothamist.

NYC isn’t the only spot putting a stop to CBD, a non-psychoactive cannabis compound, in ingestible items. At the start of the year, Maine and Ohio also took a stand against culinary creations with CBD. Even though some believe the substance helps to relieve everything from anxiety to insomnia, the FDA hasn’t definitively weighed in on its safety or proved any measurable health benefits.

For now, the ban means health inspectors will search for products containing CBD during regular food safety inspections. Any items discovered will be embargoed, which admittedly feels a little confusing. Beginning October 2, violators will be fined between $250 and $600 for failing to adhere to the new regulation. But city council member and Health committee chair Mark Levine is reportedly going to propose legislation that will squash CBD violations in the city, according to Gothamist.

Don’t fret yet, CBD stans. You can still grab topical and beauty products containing CBD at retailers including Walgreens, CVS, and Kroger. Gone but never forgotten.