But factoring in P.E.I.’s estimated $546,000 share of a new federal/provincial cannabis tax over the same period, the province managed to come out slightly ahead.

That left the Crown corporation in charge of cannabis sales with a gross profit of $1.8 million after product costs were taken into account.

But $2.4 million in overhead costs, including a portion of expenses transferred over from the P.E.I. Liquor Control Commission, pushed the cannabis corporation into the red.

Finance Minister Darlene Compton said there are a number of factors which led to losses for the P.E.I. Cannabis Corp. in its first fiscal year of operation.

„There’s extra cost in implementation with branding and store frontage and ensuring the public are aware of what’s going on and what the rules are. So that all costs money,” said Compton. 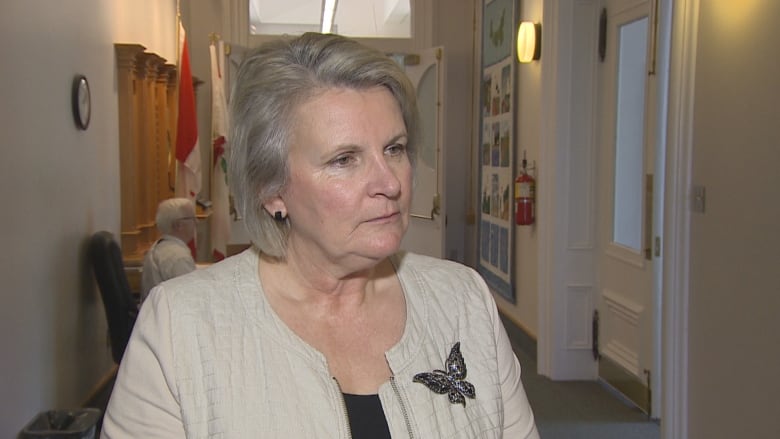 Finance Minister Darlene Compton said there are a number of factors that led to the loss for the P.E.I. Cannabis Management Corporation. (Rick Gibbs/CBC)

She also noted one of government’s four stand-alone cannabis stores, the one in O’Leary, opened months behind schedule.

„Like with any new business you know there are costs that you’re going to incur and it’s going to take a while to see some kind of revenue.”

In its current budget before the legislature, the province is forecasting a modest turnaround, projecting a relatively small profit of $310,000 for the P.E.I. Cannabis Corp. in the current fiscal year.

Cannabis tax revenues, meanwhile, are expected to climb to $2.5 million.

Compton said some costs for the P.E.I. Cannabis Corp. would be reduced in the coming year, for example staff training and money for branding.

With any new business … it’s going to take a while to see some kind of revenue.— Darlene Compton

„Like any new business I would say you would hope to have at least a break even point,” she said.

„If there are new monies that come into our tax revenue through cannabis, we’ll look at how we should use those funds going forward.”

Pot sales for the first quarter of the 2019-20 fiscal year came to $3.8 million, an increase of eight per cent over the average of sales from the previous two quarters.

Even with the projected increases in profits and tax revenue, pot will still trail far behind alcohol as a revenue source for the province.

The PEILCC posted a $21 million profit for 2018-19 from selling booze, with the province’s health tax on liquor providing another $20 million in revenues.