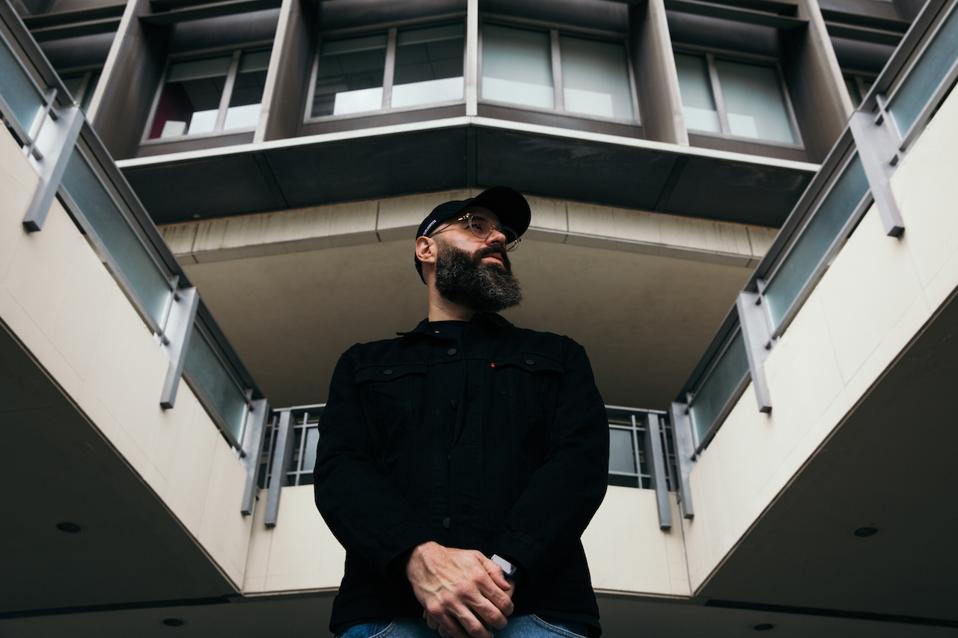 Roger Volodarsky initially founded Puffco – the industry’s premier vaporizer company – on a dare from a friend. Photo courtesy of Puffco.

I’m intrigued by technology when it makes my job easier. Take the Puffco Peak, for example. This is quite the invention, and I am quite fond of it. Historically, I’ve shied away from vaporizers that use concentrates. The potency of the materials themselves have bothered my equilibrium in the past, making the circumstances of smoking “dabs” most unpleasant to say the very least. Then, there is the stigma of lighting a blow torch, reminds me of Richard Pryor and an ill-fated event with smoking cocaine. I have difficulty with the blow torch part of the equation. Enter the Puffco. It makes the process of smoking concentrates an easy adventure, nothing more than placing the material into the handy ceramic bowl and then pressing the on switch. In mere seconds, your vessel is vaporizing the dab and the smoking experience is easy on the lungs. No more inhaling red hot materials. I’m a fan of low-temperature dabs. If I’m going to dab in the first place, the Puffco makes it easy to do my sesh— always correct the first time, and every time. That’s quality for you. Because this device has done so much to change my views and contributed so much to concentrate culture, I just had to learn more about the man behind the technology. Now, please meet Roger Volodarsky, CEO of Puffco. 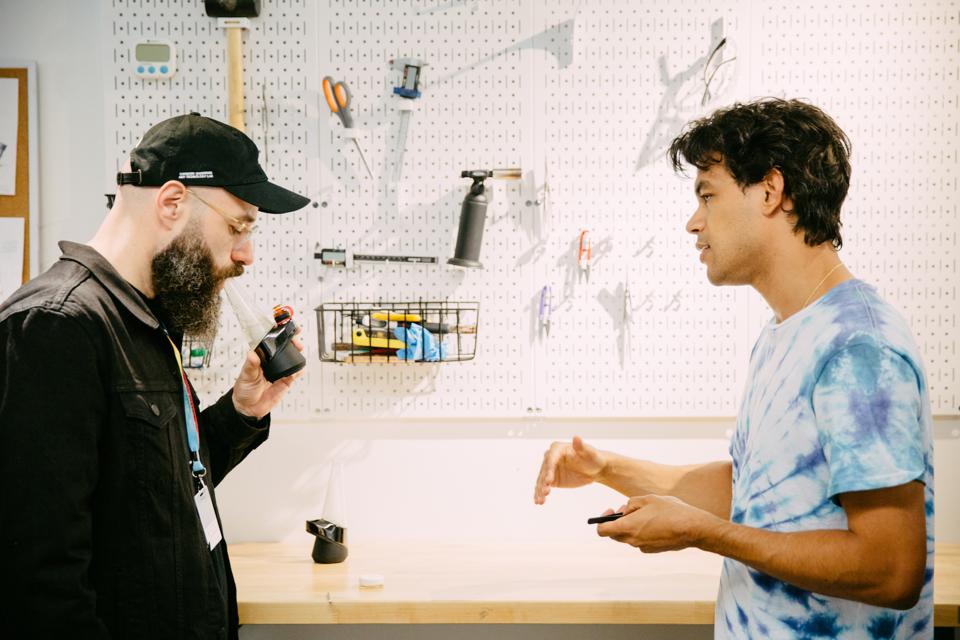 Roger and a member of the Puffco team testing out the Peak smart rig.

Warren Bobrow: When did you first try concentrates? When did you decide that the concentrate technology business was an avenue you wanted to pursue? What inspired you to create Puffco? What’s Puffco’s contribution to the rise of concentrate culture?

Roger Volodarsky: The moment that changed my life was in 2010 when I was exposed to concentrates for the first time. My initial experience with concentrates was getting this sticky substance all over my hands and rolling papers then just throwing it out in frustration. Not long after, a friend introduced me to vape pens designed for concentrates, which completely changed my experience. I went from being a New Yorker having to hide my use, to being able to consume anywhere I pleased. This was before e-cigarettes and vaporizing had become popular, so my consumption instantly became invisible to everyone around me. I felt liberated being able to walk the streets of New York City enjoying concentrates in public with the veil of a newfound means, and I began sharing that discovery with the people I met.

There was never one specific moment when I decided to get into the business; there was just a moment when the hobby that I lived and breathed turned into one. After pushing all my friends to start using vape pens, one suggested that I should make my own. Had I known how incredibly hard product development is, or how challenging it is to have a product manufactured to your standards, I likely would’ve never even made an attempt to make my first vaporizer. But it seems like I had just the right amount of ignorance and ambition to take on the challenge.

Concentrate culture has developed some of the most innovative products I’ve ever seen, created by some of the most amazing individuals I’ve ever met. It’s a culture based on constant innovation. One where growers changed their measure of success from the amount of flower they grew to the amount of resin that flower produced. Where pipe-makers went from artists to making innovative consumption devices that didn’t exist and desperately needed to. Our culture prioritizes experience above all else, and the Puffco Peak has been our contribution.

The Peak is a device that serves as a platform for concentrates and art alike, the two things that make our space special. We continued to innovate on this platform by creating the Puffco Glass Open. The Glass Open is a contest where artists big and small submit their Peak-compatible designs and our community votes to determine the winners. We then host a touring art show to showcase all of the artists’ work and create a safe space for our fans to enjoy it.

We also look to continuously grow our internal culture by inviting leaders from our industry to speak with our employees, ensuring everyone at Puffco is tasked with the responsibility of being culture carriers themselves. 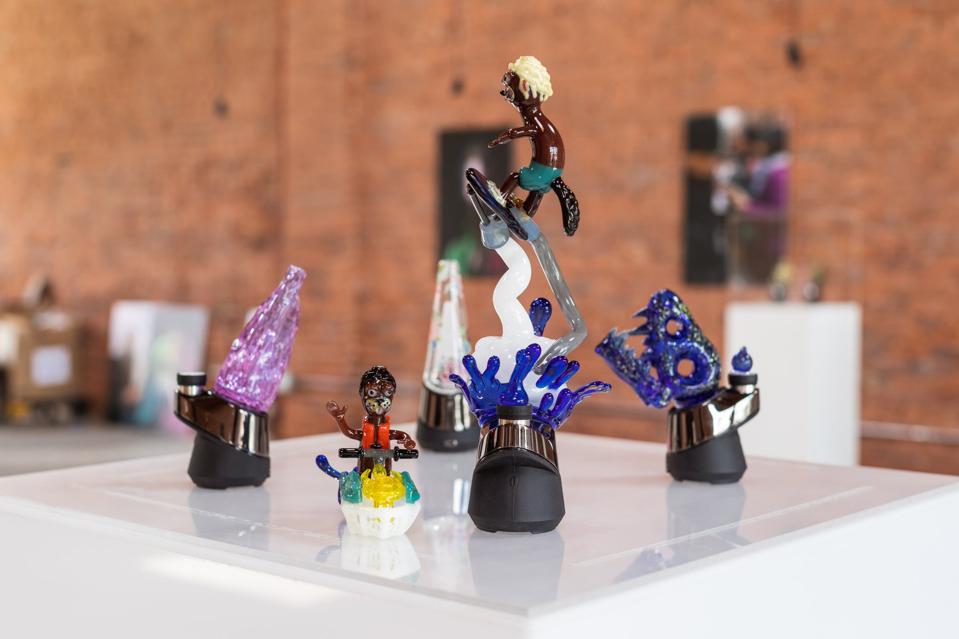 WB: Since you recently relocated to LA from NYC… What do you miss about New York and what do you love about California? Care to share any reflections about the similarities and differences in the local industry cultures?

RV: What I miss most about New York — the people. It’s a challenging place where the race of daily life instills a passion that is unique to New Yorker’s. The people in LA are different because the environment and values here are different. The pace and ease of life feels much more relaxed because you have plenty of space, plenty of sun, and a lot of time to sit in traffic and contemplate it all. Despite the difference in hustle, I love LA, and it’s a place I’m getting used to calling home. Every single weekend I’m going on a hike and enjoying a mountain top view of an entire city, rolling hillsides, and an ocean, all in the same scene. I’ve never experienced that kind of reward in my personal life or had the ability to escape to it in a moment’s notice.

Comparing the concentrate culture of NY and LA is like comparing the fashion culture between Kentucky and Paris. One is a hub for innovation and a home for some of the greatest minds in the space, and the other simply exists. California has had a community that pushes the boundaries of culture and innovation for a very long time. New Yorker’s are behind the curve because they lack what California has an abundance of: safe access points that grow culture and drive innovation in our space. 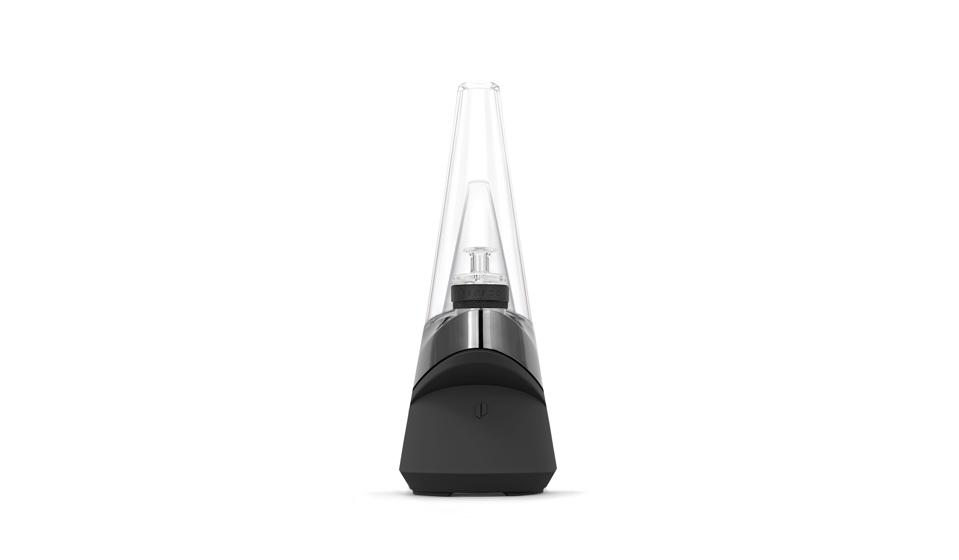 WB: Do you cook? If so, who taught you? Mother? Father? Television cooking shows?

RV: Unfortunately, I’m a terrible cook but am lucky to have a girlfriend who is great. She’s a vegetarian who has supported my ketogenic diet. I’ve been eating a ketogenic diet for some time now, and in the process I developed a new perspective regarding my eating habits. I think the most important part is understanding the relationship that food has with your body and your mind. Applying this discipline around food has not only provided me with a ton of weight loss, but also the feeling of being mentally sharper than ever. 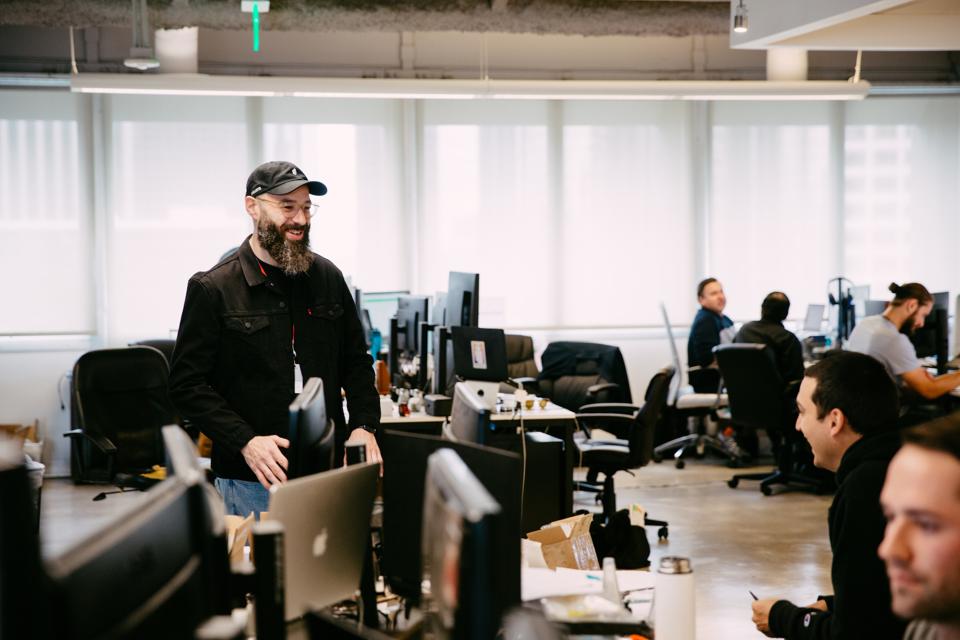 Roger at the Puffco HQ in Los Angeles

WB: Where do you see yourself and your company in six months? A year? Five years?

RV: Our hope is that in five years, our space will have more connoisseurs than it does now. The world we’re pushing for is one where a perfect consumption experience exists for anyone who wants it. With every project we pursue, we put ourselves out there and take risks with the hope that our community will share and support our vision for what the future should be.

WB: What did you want to be when you grew up (when you were a kid!)?

RV: Growing up within a family of immigrants, I defined success by the people around me who had enough money to do the things that they wanted. I dreamed of being a respected man than I did about what that man would be doing with his life. I never had one thing that I wanted to be except for in control of my own future. I dreamed of being able to pursue the things that would allow me to work passionately. This space has always been the one thing I was obsessed with above all else and I never dreamed that it would be where I found success.

WB: If you could be anywhere in the world where would you be right now? Doing what?

RV: I’ll give you the most perfect 24 hours I can think of — It would be coming into work and collaborating with people I love on a mission we all deeply believe in, pushing each other to add value to other people’s lives, and leaving that day feeling like a more evolved person than the one who entered the office. Finishing off my perfect day means going home to my girlfriend and two dogs and using the Peak until I fall asleep. The best part is doing it all over again the next day.