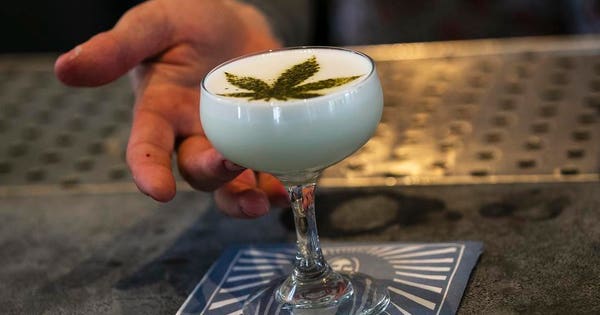 CBD extract is popping up in everything, from CBD infused cosmetics to cocktails. (AP Photo/Damian Dovarganes)

Health trends come and go but one wellness phenomenon that shows no sign of slowing is CBD. CBD, otherwise known as cannabidiol, is indisputably one of the hottest health topics right now, with CBD products now available on the high-street in food and beverages and no longer restricted to supplements from a pharmacy. According to the Cannabis Trades Association U.K., the number of CBD users has doubled over the past year from 125,000 to 250,000 and the acquisition of This Works, the British beauty and wellness brand, by Canopy Growth, the world’s largest cannabis company, is just one of many examples highlighting the growing presence of CBD in the U.K. market.

Used for a variety of ailments from pain relief to anxiety and depression, CBD oil should not be confused with cannabis use, which has previously been linked with causing depression in teenagers by the NHS. Shiona Redmond, CBD expert and creator of Graces London, a luxury CBD oil beauty and lifestyle brand, explains that CBD is a non-psychoactive cannabinoid from the cannabis plant, whereas tetrahydrocannabinol (THC) is the psychoactive cannabinoid that creates the „high” commonly associated with marijuana use. Because CBD contains less than 0.2% of the psychoactive THC it is, therefore, legal to buy and consume in the U.K.

The increasing popularity of CBD in the U.K. is perhaps a delayed reflection of the success in the U.S., where legal sales of marijuana products surpassed $10 billion in 2018. Bolstered by a growing cohort of Gen-Z consumers, who are twice as likely to use CBD than the national average, it’s no surprise that CBD uptake in the U.K. has grown so quickly, given that 1 in 5 young adults have a diagnosable mental health disorder.

But how does CBD help mental wellbeing? Redmond explains that humans have cannabinoid receptors in our bodies, part of a self-regulatory system called the endocannabinoid system which aims to create homeostasis, a sort of consistent internal balance, in the body. “The ECS has been noted as one of the most important physiologic systems involved in maintaining our health and balance,” says Redmond, “In 2007 the ECS was discovered to play an important regulatory role in the secretion of hormones related to reproductive functions and response to stress.”

The human body actually produces its own cannabinoids which have the same composition as the CBD cannabinoids from cannabis plants, therefore a CBD intake interacts with our bodies in a similar way. The sensation is akin to the „runners high” or feel-good buzz felt after physical activity because the naturally produced cannabinoids in the brain are heavily linked with euphoria and serotonin.

CBD products are growing not only in availability but also range, with several popular alternatives instead of vaping. Often taken sublingually, as an oil, tincture or spray absorbed via the mouth under the tongue, CBD is also popping up in food and beverages, with Crussh becoming the first U.K. chain to offer cannabidiol products with the recent launch of a CBD booster to add to drinks.

CBD products are increasingly available in the U.K to address a range of health and wellbeing concerns (Photo/Graces London)

For those who would prefer not to ingest CBD orally, topical CBD products like skincare oils, body balms, bath bombs and face masks are also increasing in popularity. Redmond says: “CBD extracts can be absorbed through the epidermis layers of the skin to interact with cannabinoid receptors located on skin surface cells. With the skin being the largest organ of the human body, what we put on our skin doesn’t only affect the skin, but it can have long-lasting effects on our health and general wellbeing.”

With wellbeing at the center of the CBD phenomenon, further growth in the U.K. is inevitable. Partly linked to the arrival of trendy CBD beauty brands like Milk Makeup—aimed at a younger audience and now sold in the U.K. since January—but also hard to not draw parallels with the downward trend in smoking and drinking amongst the younger generation. Gen-Z music artists like Lil Pump are now becoming cannabis ambassadors, rather than the traditional alcohol advertising contracts that millennials and baby boomers are accustomed to seeing.  Reflecting this cultural change in consumer behavior, Facebook has recently relaxed its rules on CBD advertising, now allowing the promotion of topical CBD, but still banning ingestible CBD.

It will be interesting to see how CBD advertising is regulated going forward, due to the wide-spread use of CBD but varying levels of concentration within products.”Not all CBD is created equal., says Redmond, “The CBD cannabinoid content in extracts can vary from just a few percents to more than 90% CBD. The extraction method used will determine the CBD cannabinoid content. CBD flowers can be cold-pressed, distillation processes can be used or varied forms of alcohol, solvent, and C02 extractions can be used to extract the oil. The clearer and more golden the oil, the more purified and concentrated the whole plant CBD extract is.”

Although greenwashing often refers to brands attempting to appear more environmentally friendly, the term still applies here with the rise of CBD and mental wellbeing giving brands an opportunity to capitalize by using hemp seed oil, another derivative from the cannabis plant. Hemp seed oil, sometimes referred to as Cannabis Sativa seed oil, should not be confused with CBD. It’s been widely available within the health and beauty industry for years and does not contain the same beneficial cannabinoids as CBD. Having social media at their fingertips, Gen-Z shoppers are not afraid to call out big beauty brands for greenwashing. Time will tell how young consumers respond, as they become more clued up to what’s within their products.