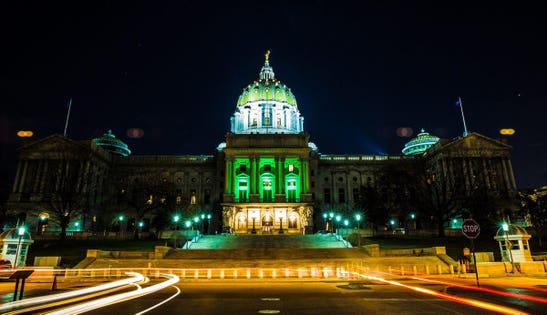 The Pennsylvania state capitol is shown lit up in green to commemorate the passing of medical marijuana legislation. (Credit: Governor Tom Wolf via Flickr)

To coincide with today’s congressional hearing on marijuana laws and injustice, drug policy advocates from around the country are joining forces in pursuit of their common goal: fair, equitable cannabis reform.

The House Subcommittee on Crime, Terrorism, and Homeland Security heard testimony Wednesday about the impacts of US marijuana prohibition on American health and freedoms, as well as the necessary road ahead to protect them. Legal and health experts addressed members of congress about the known social benefits of legalization, the massive marijuana arrest rates that continue in the US, and the need to remove marijuana from the Controlled Substances Act as quickly as possible.

During his opening remarks, House Judiciary Committee Chairman Jerrold Nadler (D-NY) emphasized, “For those saddled with a criminal [marijuana] conviction, it can be difficult or impossible to vote, to obtain educational loans, to get a job, to maintain a professional license, to secure housing, to receive government assistance, or even to adopt a child.”

In honor of the historic hearing, entitled „Marijuana Laws in America: Racial Justice and the Need for Reform,” drug reform advocates announced their formation of a coalition aimed „to advocate for federal marijuana reform through a racial justice lens.”

Queen Adesuyi, Policy Coordinator at the Drug Policy Alliance’s Office of National Affairs, commented in a statement, “This coalition was formed with the goal of reforming federal marijuana laws, but doing so in a way that gives back to the communities most impacted by the war on drugs. Black and brown people have been traumatized by our racist marijuana laws and, as the federal government embraces reform, our groups will make sure that any proposal will repair the damage done to those communities.”

The hearing itself demonstrated the need for lawmakers to pursue meaningful learning on the topics of marijuana reform, racial justice, and their significant overlap—as well as the wealth of knowledge that reform advocates and experts are available to provide when asked.

In his opening remarks, Rep. Tom McClintock (R-CA) stated that marijuana reform is one of few topics that our current, often heavily divided Congress could potentially agree on during this congressional session, but also added that a large number of proponents, including advocates and expert witnesses present, were determined to „play the race card” in this area in order to stoke racial tensions.

Thankfully, members of the expert panel were on hand to gracefully but firmly push back on McClintock’s bizarre and disrespectful assertion, which seemed to disregard decades’ worth of data showing that—among other things—Americans of color are arrested and incarcerated at several times the rate of whites, with long-lasting and truly devastating effects.

„Whole communities are being ravaged,” stated Baltimore State’s Attorney Marilyn Mosby during her testimony. Mosby also reminded those present that marijuana laws have been „racist and discriminatory in their implementation.”

Dr. G. Malik Burnett, MBA, MPH described the current state of US cannabis (with complete accuracy) as „a tale of two Americas:” in short, one where wealthy white men are starting successful cannabis businesses with few hurdles while Americans of color who simply use the plant keep getting their freedom and livelihoods taken away.

The Marijuana Justice Coalition’s set of principles are as follows:

• Provisions eliminating barriers to access to public benefits (e.g. nutrition assistance, public housing, etc.) and other collateral consequences related to an individual’s marijuana use or previous arrest or conviction.

• Provisions eliminating unnecessarily discriminatory elements for marijuana use, arrests and convictions, including drug testing for public benefits or marijuana use as a reason for separating children from their biological families in the child welfare system.

• Provisions that ensure that marijuana use or participation in the marijuana industry does not impact the immigration status of noncitizens nor their ability to naturalize.

• Marijuana tax revenue be directed to local units of government and community-based organizations to reinvest in individuals and communities most impacted by the war on drugs, particularly through programming that helps eliminate the collateral harms of marijuana prohibition, especially for individuals with systemic and structural barriers to employment and/or living in high-poverty communities.

• Marijuana tax revenue be directed to support entrepreneurs from communities directly impacted by the war on drugs with a process to provide them with the requisite capital to develop cannabis businesses, and encourage emerging licensing programs to be inclusive and reflective of their communities.