A man is shown exiting a store that sells cannabis in St. John’s last October, the first day the drug became legal in Canada. (Chris Wattie/Reuters)

Statistics Canada’s quarterly report on cannabis prices suggests the cost chasm between legal and illegal versions of the drug is wide, and getting wider.

The data agency reported Wednesday that the price gap between the two types of cannabis is as wide as $4.72 a gram, on average.

Canada legalized recreational cannabis last October, but the rollout across the country has been plagued by delays, limited supply, and other logistical issues.

StatsCan has been asking Canadian cannabis users to tell them about how often they use the drug, and what they pay for it when they do, and the data paints an illuminating picture of a part Canadian society that used to operate solely in shadows.

Based on 572 voluntary responses the data agency deemed credible in the second quarter, StatsCan said the illegal version of the price fell from $6.23 per gram on average, at the start of the year, to $5.93 a gram in the three months up to the end of June.

And the gap is getting bigger, not smaller. Three months ago, StatsCan’s report of the first full quarter of price information showed the gap between legal cannabis and the illegal variety was $3.62 a gram.

That means the illegal stuff today is roughly half the cost of the legal variety. So it is not surprising that more than half — 59 per cent — of respondents said they purchased illegal cannabis during the period. 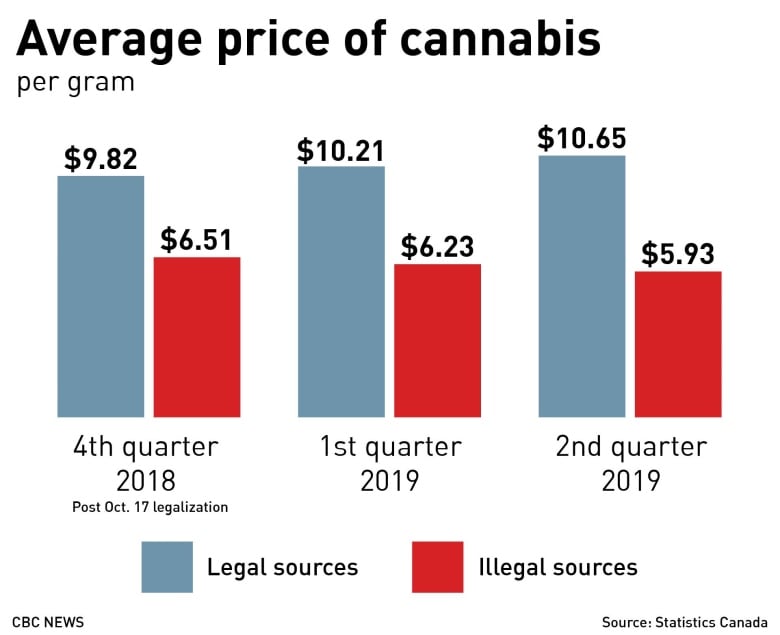 According to Statistics Canada, the gap between legal and illegal cannabis is getting wider since the drug became legal. (Scott Galley/CBC)

While StatsCan relies on user submissions for a lot of its information, it supplements that data by monitoring prices from illegal online cannabis retailers. The data agency says it obtained more than 423,000 prices that way during the three-month period and, as such, has calculated that across all types of cannabis, the average price per gram of dried cannabis was $8.44 in the second quarter of 2019, down from $8.61 in the first quarter.

Brad Poulos, a lecturer in the Ted Rogers School of Management at Ryerson University in Toronto, says there will likely always be a gap between legal and illegal drugs, mainly because the legal stuff has a host of added expenses that increases the cost of doing business.

„There’s an excise tax built in. Then, depending on the province, there’s GST and HST on top of that,” he said. „There’s compliance costs that legal cannabis producers have that the illicit market doesn’t have to worry about. Add it all up and there’s quite a cost disadvantage.”