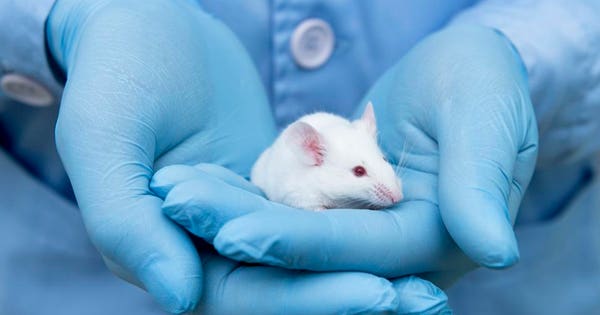 Small experimental mouse is on the researcher’s hand

Adrian Devitt-Lee, is the young genius behind of Project CBD. He is reputed to be formidably knowledgeable regarding CBD. Here, Devit-Lee along with renowned doctor, Peter Grinspoon, weigh in to clarify if cannabidiol really killed four-and-a-half mice in a hotly debated study and will subsequently cause liver damage.

A recent article by Mike Adams for Forbes, asserts that CBD “could be damaging our livers in the same way as alcohol and other drugs.” This and other conclusions drawn by Adams caused the Henny Pennies of Twitter to insist the sky was falling. (Forbes’ format does not include reader’s feedback, so many readers took to Twitter to vent their anger.)

According to Devitt-Lee this sensational claim was based on a dubious study of CBD and liver toxicity conducted by researchers (Ewing et al) at the University of Arkansas in Little Rock – except the damage discussed in the study was unrelated to alcohol toxicity and “our livers” actually refers to the livers of mice.

The Little Rock study makes no mention of humans beings, „which is a hugely important distinction,” clarifies Devitt-Lee. „Moreover, in the real world CBD consumers are not ingesting 0.25% of their body weight – the maximal dose that Ewing et al used in their study of liver toxicity.”

Nevertheless, according to Mike Adams’ Forbes article “People that use CBD are at an elevated risk for liver toxicity.” And “[CBD] may actually be just as harmful to their livers” as “conventional pain relievers, like acetaminophen.”

„The huge popularity of cannabidiol (CBD), a non-intoxicating component of cannabis, has helped to destigmatize the plant and restore its reputation as an important medicinal herb. But bogus science and inept reporting continue to distort how we understand the benefits and risks of CBD and cannabis,” asserts Devitt-Lee

„The breathless reporting in Forbes focuses on a single, flawed, preclinical study and exaggerates it to the point of falsehood. Yet if there’s a saving grace of the Forbes article, it’s that it gets much less wrong than the study itself,” says Devitt-Lee (The study is freely available from Molecules, a journal published by the Multidisciplinary Digital Publishing Institute. (MDPI))

Devitt-Lee elucidates that a close examination of the Molecules study „reveals a Pandora’s box of strange statements, problematic publishing and unreasonable experimental design. On the first page, the abstract makes a claim that is fundamentally impossible, stating that, with chronic administration of CBD, '75% of mice gavaged with 615 mg/kg developed a moribund condition.'”

However, merely six rodents received this dose. „One doesn’t need an advanced degree in science or math to recognize that something is amiss. Seventy-five percent of six equals 4.5,” he sniffs.

According to the Little Rock researchers, four-and-a-half mice died from CBD, while somehow one-and-half mice survived.

Reading on, it only gets worse.

Dr. Devitt-Lee surmises that „scientists force-fed mice a single dose of CBD, ranging from the supposedly “low” dosage of 246 mg/kg up to a mega-dose of 2460 mg/kg CBD. That means for every kilogram of body weight, they gave the mice about 2.5 grams of CBD, which had been formulated as a hexane extract from cannabis supplied by the National Institute on Drug Abuse (NIDA). Hexane, incidentally, is a neurotoxin.”

„It is important to remember, that mice are not humans,” says Dr. Peter Grinspoon. „Those poor mice. Someone should call the ASPCA on those researchers,” he adds.

Devitt-Lee explains that in the „preliminary research on panic and anxiety, humans are usually given 300-600 mg CBD. The maximum human dosage recommended for the CBD-isolate Epidiolex is 20 mg/kg, which is over 100x less than what the Little Rock researchers force fed their experimental mice. They also tried smaller doses (ranging between 61.5 to 615 mg/kg) of CBD, which was given daily for 10 consecutive days.

This column was posted in conjunction with ProjectCBD. To continue reading, please click here.