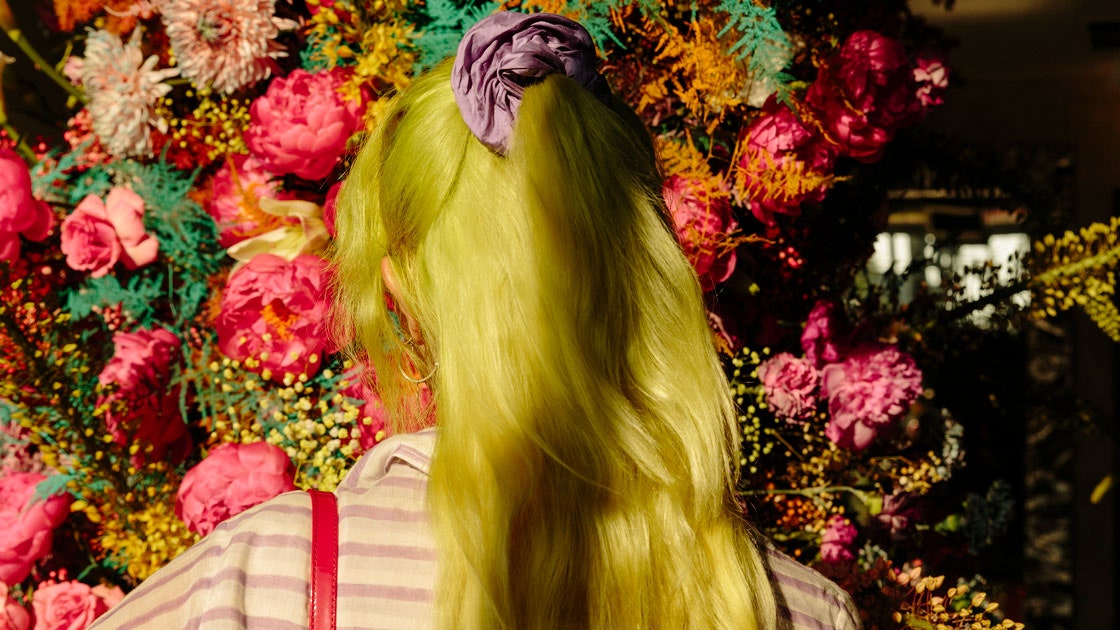 At Broccoli magazine’s inaugural cannabis festival, the dress code was unwritten, but understood. On Friday, as attendees sipped CBD slushees on the second floor of Portland’s Jupiter Next hotel, the room was radiant with floral dresses and oversized earrings. Maybe it was the name—In Bloom—but it was obvious this was not an occasion for neutrals. From the welcome desk’s Seussian floral centerpiece to its array of highlighter-green goodie bags, In Bloom had a spring fling energy from the get-go. Everyone kept calling it “weed prom.”

Unlike the beboothed, brotastic set-ups that have come to define the cannabis conference circuit, the weekend had an organic feel to it. Attendees were welcome to flit between scientific discussions and a joint-rolling station, taste edibles on an outdoor patio or peruse psychedelic candles at the lobby pop-up shop. Since it was founded in 2017, Broccoli magazine has made a name for itself as a well-designed enclave for creative women interested in cannabis, whether they meet on the page or IRL. Its devoted followers call themselves “Broccolinis.”

“The corporate cannabis world is very male dominated, very white, very venture-capital focused, and it’s not an environment that I find inspiring or empowering,” Broccoli founder Anja Charbonneau later told Vogue. “Usually, the only nod to women is a panel focused on marketing or ‘women in weed,’ and these conferences are missing out on the opportunity to highlight the people that I believe are legitimately shaping the industry.”

The In Bloom crowd was made up of both entrepreneurs and enthusiasts, and although the event wasn’t marketed exclusively to women, all but a handful of the 175 attendees were. A British Columbia-based smokeware designer sat with the biochemist behind an Oregon farm; an illustrator and concert promoter couple shared recommendations for the best healing baths around town. Cookbook author and activist Mennlay Aggrey had flown in from Mexico; on Saturday she wandered to the Portland farmers market for spicy popcorn and fruit popsicles, joined by cannabis chef Megon Dee-Cave, Nice Paper creator Charlotte Palermino, and Cannaclusive founder Mary Pryor. As one might hope of a “benevolent weed cult gathering,” as Charbonneau affectionately called it, the schedule had built-in time for chilling (which, after sampling an infused gummy, this writer exercised by opting out of evening entertainment to instead eat the mini bar’s entire stock of Swedish fish).

But between the flower-arranging station, botanical oil blending workshop, and adorable bunny petting zoo, the weekend raised topics increasingly urgent for those in the business: education, regulation, conscious brand-building, and social justice. Cambria Benson, founder of cult-chic dispensary Serra, helped warm up the crowd on a panel simply entitled Sharing Our Cannabis Stories. Visibly pregnant with her second child, she was candid about motherhood and marijuana. The talk then spanned trauma recovery, epilepsy treatment, and community building in the face of big pharma. “Cannabis is incredibly problematic, complicated, unknown, and there are so many battles to fight, whether it’s for legalization, criminal justice reform, or even just getting some standards for CBD testing so that we actually know what we’re buying,” Charbonneau said. Now that recreational use is sanctioned in 11 states, and most Americans support legalization, Charbonneau hopes that connections forged at In Bloom will help route marijuana’s rambling map.

The industry’s expansion has carried with it a promise of diverse, female founders who might finally wield equal power in an emergent space. But as opportunists rush in, inclusivity is far from given. Disproportionate marijuana arrests over decades mean black and Latinx people have greater barriers to entry in the now-legal and medical markets. And even since legalization, a January 2018 study from the Drug Policy Alliance (a non-profit that seeks to re-envision drug regulation) found that black people are still more likely to be arrested for marijuana offenses than white people in Colorado and Washington. (Screenwriter Aaron Covington’s recent widely circulated tweet may have put it best: “When the dispensary looks and operates like an Apple Store it’s time to release a lot of incarcerated human beings. A lot, a lot.”)

A number of the women at In Bloom have been active in fighting the imbalance.

A digital marketing specialist, Mary Pryor was working at an ad agency when she developed Crohn’s disease. She began advocating for cannabis after she discovered it as a way to manage the chronic illness. “Most cannabis events make me feel very isolated,” Pryor noted. “While I see people intentionally making attempts [to be inclusive], which is big, I feel like we always have to ask for our space in the room.” As a direct response, she, along with co-founders Tonya Flash and Charlese Antoinette, created the organization Cannaclusive. They advocate diversity online, at events, and by consulting with brands. At In Bloom, Pryor spoke on a panel about brand-building with integrity, citing tokenism without real corporate responsibility as a major issue in the industry.

“I hope that my talk was a way for people to understand that we built the table,” Pryor said, “and we’re coming for our seats. So you either make sure that you understand that there’s space that needs to be there, or if not, get ready to have some people knocking at your door, asking what your problem is.”

The conversation continued during a live recording of High, Good People, a new podcast by journalist Tiara Darnell. An aspiring winemaker turned budtender while in grad school, Darnell received a grant from Portland’s Regional Arts and Culture Council to create a series that “explores relationships between people of color and cannabis in the new age of legalization.” In one upcoming episode, she interviews the black owner of a dispensary in rural Eastern Oregon, contextualizing the story with the state’s racist history and the obstacles black business owners face across the country. For Darnell, the boon of In Bloom was making connections beyond the local scene. “I’m really excited to have met some people who I can hit up and just say like, ‘Hey, I’m really interested in whatever it is that’s going on in your city or country,” she said. “Having that network is going to be really important because I know that this is an industry that I plan to create a career in.”

Momentum was evident at In Bloom, even on such an uncertain playing field. Darnell is in talks with distribution platforms as she prepares to release the first season of the podcast, while Benson is opening a new Serra flagship in West Hollywood later this year. Cannaclusive is involved in events from New York to L.A., and the Broccoli team is working on a one-off psychedelic mushroom issue. As Darnell put it, “The legal evolution is moving at a snail’s pace compared to the creativity and the drive that a lot of women have to make these kinds of events happen.” Maybe it was the CBD coffee or the therapy bunnies, but after a weekend at In Bloom, the future of cannabis seemed bright.