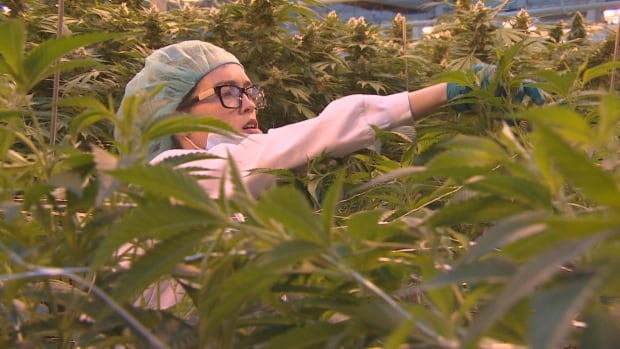 CannTrust has 12 rooms in its Niagara-area greenhouse, but five of them were apparently producing cannabis before they were legally licensed to do so. (CBC)

CannTrust Holdings Inc. says it has put a hold on product sales and shipments of all its cannabis products as a precaution while Health Canada reviews its Vaughan, Ont., manufacturing facility.

„CannTrust is working closely with the regulator through the review process and expects to provide further detail of the duration of the hold and other developments as they become available, the company said in a release late Thursday.

„At this time, the impact of these matters on CannTrust’s financial results are unknown until the regulatory review process is complete.”

The company said it has also established a special committee of its board of directors to do its own investigation.

CannTrust said Monday it had been notified by Health Canada that the regulator had discovered unlicensed cultivation at its Ontario greenhouse between October 2018 and March 2019, before the five rooms received the appropriate licences in April 2019.

It said as a result, Health Canada put on hold roughly 5,200 kilograms of CannTrust products from that facility, and the licensed producer put a voluntary hold on an additional 7,500 kilograms of pot products which were also linked.

CannTrust’s chief executive Peter Aceto has said that represented the „majority” of its inventory and warned of potential shortages ahead.

Stenocare said contrary to the initial information it got from the licensed producer, it has now received documentation that shows that five batches of the Danish company’s inventory originated in growing rooms that did not have government approval.

„As a result of the new information, all products delivered from Stenocare relating to the batches in question will be put in quarantine, which means that they will be isolated and blocked from being sold until the Canadian health authorities, Health Canada and the Danish Medicines Agency have concluded in the matter,” the company said in a statement.

Stenocare, which caters to medical cannabis patients, added that „most, yet not all” of the CannTrust products in its inventory and that it has supplied to the Danish market since June 10 are linked to the unlicensed cannabis cultivation.

It was a reversal of Stenocare’s comments earlier this week when it said only one „very small” batch was connected to the unlicensed growing, which Health Canada continues to investigate.

CannTrust announced a joint venture with Stenocare that saw it receive a 25 per cent equity stake in the Danish company in March 2018 and made its first shipment of cannabis oil to Denmark in September 2018.

The company was not immediately available to comment on Thursday. Peter Aceto said on Monday that „mistakes” were made but CannTrust is working to get back into compliance with Health Canada and is conducting a thorough review to determine what transpired.

Stenocare said it was in close dialogue with the Danish Medicines Agency, which regulates medicinal products in the country, about the matter.

„The most likely consequences from this new situation is that there will be a temporary shortage of medical cannabis products to the Danish market,” the company said in a statement. „This will have negative financial consequences to Stenocare irrespective of the fact that CannTrust is contractually committed to deliver fully licensed and approved products.”

CannTrust’s shares traded down another 11 per cent to $3.60 a share Toronto Stock Exchange on Friday. That’s getting close to half of its closing share price of $6.46 the previous Friday, before CannTrust disclosed Health Canada’s findings on Monday.

Stenocare’s wider quarantine comes one day after authorities in Alberta and Ontario pulled or put on hold CannTrust’s products until Health Canada completes its investigation.

The Alberta Gaming, Liquor and Cannabis Authority on Wednesday said it was placing the affected lots of CannTrust’s products on hold as a precautionary measure. The decision impacts online product available through AlbertaCannabis.org and AGLC distribution.

„It is at the discretion of privately licensed Alberta retailers to work in consultation with CannTrust and Health Canada to determine whether they will continue to sell existing inventory, should they have affected products,” said Heather Holmen, an AGLC spokeswoman, in an emailed statement.

Earlier Wednesday, the Ontario Cannabis Store said it had removed certain CannTrust Products from its online store and distribution to physical outlets.