Hyperbole can be rampant in health news, particularly with respect to cannabis. One recent headline declared: “CBD is effective in treating heroin addiction.” Another proclaimed: “New study finds CBD could curb heroin addiction.”Story continues belowThese stories were referring to a recent study in the American Journal of Psychiatry that found a short-term course of cannabidiol (CBD) reduced cue-induced cravings and anxiety in drug-abstinent individuals who were recovering from opioid use disorder, specifically heroin addiction.This study is undoubtedly exciting and a welcome contribution to the scientific literature demonstrating the potentially helpful role of cannabinoids in the treatment of opioid use disorder.That said, there is a mismatch between these headlines and the accurate interpretation of the findings from the study. And this mismatch is not trivial.Medicinal uses of cannabidiolCBD is one of many phytocannabinoid compounds found in the plant cannabis sativa. It is quickly gaining traction as a legitimate medicine in the medical community. For example, it has been associated with benefits in treating some neurological disorders and has recently been FDA-approved for the treatment of seizures in people with Lennox-Gastaut syndrome, a severe form of epilepsy.CBD has also been linked with success in treating some psychiatric symptoms — such as anxiety and psychosis — and its use has been shown to reduce the size of certain cancerous tumors in animal models.Further, unlike its sister cannabinoid, delta-9-tetrahydrocannabinol (THC), CBD is largely non-intoxicating and therefore is thought to be non-addictive. It also appears to be relatively safe to use. It’s no wonder CBD has garnered so much excitement and positive attention. 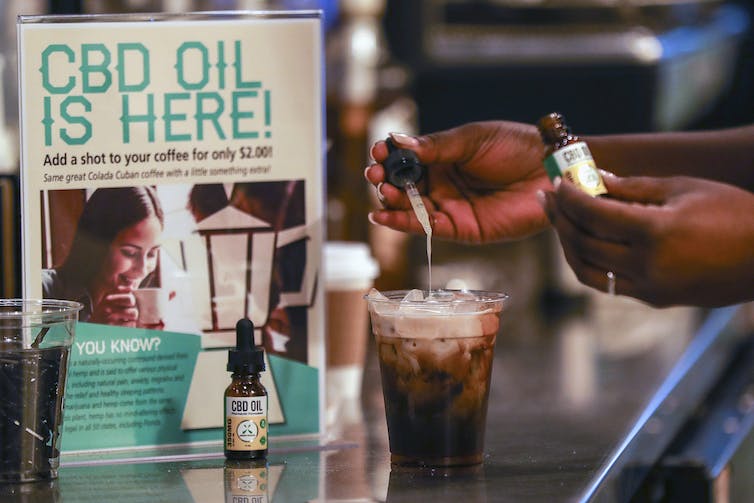 Cannabidiol (CBD), a compound derived from hemp and marijuana that doesn’t cause a high, is now added to an array of products, from drinks to skin creams. (Jennifer Lett/South Florida Sun-Sentinel via AP, File)