George shrugs over a wooden table at the Shoulder of Mutton pub in Hebden Bridge, West Yorkshire. You’ll find him here most days, morning until night. “Why see the world when the world can come to you?” he asks through a greying moustache, nursing a pint of orange juice and a roll-up cigarette.

He used to work at the now-derelict Crimsworth Dyeworks mill in Midgehole, spending years in the steam and darkness to send fabrics to nearby Manchester. Later he moved on to ripping up roads for the gas board for 25 years, which wasn’t much easier, eventually being made redundant aged 53 through ill health. “Once my health failed I was useless to them,” he says.

Now aged 67, George shows the scars of that time – vibration white finger, back injuries, sciatica, ear damage. But he is one of a growing number of over-60s using CBD, a cannabis-derived compound, and feeling that decades of injuries are easing. “Now, I don’t have my sciatica, I’m freer in my joints and I don’t walk with a limp. It won’t mend a broken bone, it won’t fix my heart, but whatever it’s doing it’s suiting me,” he says.

Medicinal marijuana was legalised in 2018 but remains near-impossible to obtain. A recent Commons health and social care committee report stated that “patients have had their expectations raised unfairly” since home secretary Sajid Javid made the ruling on medicinal marijuana, and “doctors are handling the backlash of poor government handling”.

CBD (cannabidiol) has to contain less than 1mg of THC (tetrahydrocannabinol) – the principal psychoactive constituent of cannabis – per closed container to be legal. It is being sold in places such The Tonic in Hebden Bridge, which caters for mostly older customers – it estimates around 60% of its clientele are over 60. 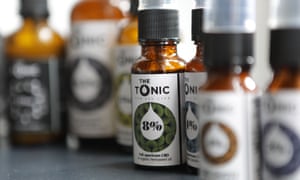 CBD, derived from cannabis, is sold by The Tonic, which caters for older, working-class customers in West Yorkshire. Photograph: Gary Calton/The Observer

“There’s a group of ladies who call themselves the ‘Golden Girls’. They come in giggling, buy a few bottles and leave saying ‘our grandkids will think we’re cool now’,” laughs Kate Henderson, who founded the store with Michelle Oxley in 2017.

Oxley was inspired to open The Tonic after years of navigating British drug laws. Growing up in Ripley, Derbyshire – “a working-class, industrial town that’s been left behind,” she says – Oxley describes how her brother was diagnosed with multiple sclerosis at a young age. Seeing how her son reacted positively to marijuana, Oxley’s mother, a “sweet, older lady”, was forced to operate beyond the law.

She bought cannabis from local dealers, learned to roll spliffs, and for 35 years felt like a criminal. “Growing up, knowing you’re breaking the law to save somebody has a massive effect on you,” Oxley says.

After cannabis was banned in 1928, entire generations were discouraged from using it and experiencing any of the benefits it may possess. But for George, who “detests drugs”, with CBD they have “taken all the wacky bits out”, as he puts it. “When you’ve had constant pain for a long time, you’ll try anything after a while,” he says.

Some critics worry that vulnerable consumers like George are being conned into buying a “miracle cure-all” in the absence of significant scientific proof. There have been no official trials into the effects of CBD in the UK. Moreover, a recent report by the Centre for Medical Cannabis analysed high-street offerings and found that more than half of the most popular CBD oils sold did not contain the level of CBD promised on the label.

“Anyone who’s grown up in recent decades has been told it’s a hard drug,” says Henderson. She’s also found that CBD is replacing a sense of community care lost to austerity and NHS cuts.

“Twenty years ago you’d tell a doctor all about your life, now they just write you a prescription for some pills,” she says.

“You can talk about cannabis in a casual conversation now and people’s ears don’t prick up,” says Paul Nugent, 58, owner of Paul’s Natural Foods. A lifelong Barnsley resident, Nugent was diagnosed with stage 3 prostate cancer in 2012. He still battles the disease – “I feel like I live in six-monthly blocks of time,” he says – but feels compelled to share what he believes has kept him healthy in one of Britain’s poorest areas.

Life expectancy in Barnsley is 59.7 years for men and 61 years for women, lower than the England and regional average, and council spending has been cut by 40% over the past eight years, which has affected social care programmes.

Barnsley was also a former coal-mining hub, and today residents suffer from respiratory problems. But against this backdrop Nugent has thrived. “We’re swimming upstream in this area but everyone knows someone who’s taken CBD,” he says. “The young are driving this confidence among the older people.”

Because of a lack of scientific evidence, British distributors are not allowed to make claims that CBD will improve specific ailments. “You’re in bad territory saying it will help with X, Y and Z,” says Nugent.

But that hasn’t stopped the rise of CBD. It comes in milkshakes and chewing gum, but as its popularity grows so do the number of irreputable stockists. Some are calling for wider drug reforms to slow misinformation and the hyperbolic language of CBD’s healing powers. Plus, this industry worth billions benefits the affluent, but British drug laws have overwhelmingly targeted low-income people for decades.

Trends aside, for many working-class communities CBD is helping where legislation and austerity are not. “CBD is legal but cannabis isn’t, and that gives it an edge,” says Henderson. “After all, everyone wants to feel like a bit of a rebel, don’t they?”

• CBD – cannabidiol – is one of two main active substances in cannabis plants. The other is delta-9 tetrahydro cannabinol, or THC, which produces the high that recreational cannabis users seek. CBD does not have this effect

• CBD can be extracted from hemp as well as cannabis plants

• CBD is also available in food supplements, cosmetics and snacks

• It is legal in the UK to buy, sell or possess CBD oil with THC levels less than 0.3%