Curaleaf buys Greenroots for US$875M to expand footprint across U.S.

There’s a new global pot giant in town. Curaleaf Holdings is snapping up privately-held Grassroots for US$875 million in a cash-and-stock deal, the company announced on Wednesday. The acquisition would take Curaleaf into 19 U.S. states and bolster its national dispensary footprint to 68 stores nationwide, while giving the combined company a pro-forma 2019 revenue of US$256 million. While Curaleaf is still looking at adding one or two more U.S. states to its portfolio, including Colorado, the company is now casting its attention to Europe’s pot market where it sees far more opportunity available than anywhere else in the world, chairman Boris Jordan told BNN Bloomberg on Wednesday.

While Canada’s cannabis industry is rife with large-scale licensed cannabis producers, some are thinking small is better. The Leaf News reports on Canada’s latest micro-cannabis producer, Hearst Organic Cannabis Products, which received its licence from Health Canada last week. The company’s founder Joël Lacelle said it took him nine months to receive the licence from the date he applied, and he invested about $700,000 in his company so far. Hearst Organic’s operations includes a relatively tiny heated greenhouse measuring roughly 30 ft. by 70 ft. as well as a small hut for drying and curing. The company is expected to grow about 600 kilograms of cannabis annually.

Aurora Cannabis is heading to Italy. The Edmonton-based cannabis producer said it was awarded all three lots to supply Italy with a total of 400 kilograms of medical marijuana over two years, MJBizDaily reports. However, winning the bid may come at a cost to Aurora – MJBizDaily said the price of cannabis per gram that Aurora offered Italy is slightly above the actual cost of growing the cannabis the company reported in its most recent earnings. Still, being able to sell into the Italian medical market gives Aurora a first-mover advantage in the country if it decides to eventually liberalize its cannabis laws to include recreational sales.

Supreme Cannabis is buying privately-held Truverra for about $20 million in an all-stock deal, the company announced on Wednesday. The deal will help Supreme produce cannabis derivative products ahead of the launch of next-generation pot products such as edibles and other extracts later this year in Canada. Truverra’s subsidiaries operate a 5,000 square-foot Health Canada licensed facility in Scarborough, Ont. that Supreme plans retrofit to produce high-quality cannabis extracts, including concentrates and vaping liquids. It also has a European subsidiary based in The Netherlands that sells hemp-based CBD products into select European markets.

$1.94
— The price per gram of cannabis that Aurora plans to charge the Italian government for supplying its medical-grade cannabis for the next two years. 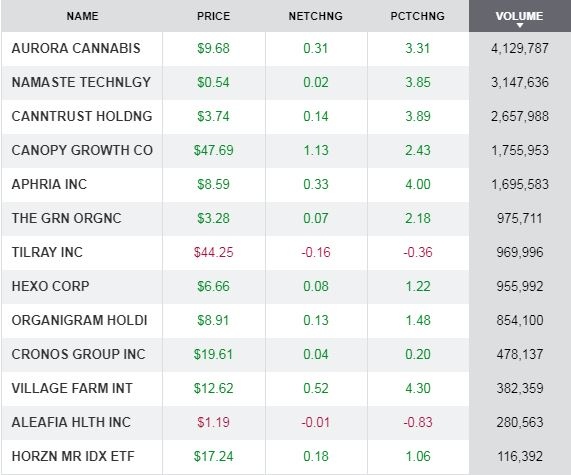