When the latest West Hollywood cafe opens, creatives will be able to sip coffee while they work on their screenplays and millennials will have one more brunch spot to frequent.

They will take a seat in a private, fenced area surrounded by lush greenery. A waiter will take their order, said Sean Black, co-founder of Lowell Herb Co., a partner in the business.

And then, customers will get a visit from a sommelier — a cannabis sommelier.

It’s a vision that Black and his partner, David Elias, have worked on bringing to life for years. On Tuesday night, the West Hollywood Business License Commission unanimously approved a cannabis consumption license for Lowell Cafe, the first of its kind in the nation, Black said. It was the last step before the cafe opens Sept. 1.

The commission also approved a cannabis consumption license for Pleasure Med, owned by West Hollywood adult retailer Pleasure Chest. The business will be a high-end retailer and cannabis delivery service with a lounge area. A wave of other businesses is expected to follow.

Black said supporters of the Lowell Cafe were “jubilant.” The West Hollywood Chamber of Commerce was excited about how the cafe might benefit cannabis tourism, and a local neighborhood watch group said it was glad to have a 24-hour security guard in the area. Even parents longing for a place to smoke away from their children supported the idea.

But a rabbi from the Jewish synagogue Congregation Kol Ami, located across the street from the cafe’s future home on North La Brea Avenue, was not as thrilled.

Rabbi Denise Eger said during Tuesday’s commission meeting that she was concerned the smell of marijuana would infiltrate the air in her synagogue, where families gather for worship and often have rooftop events. 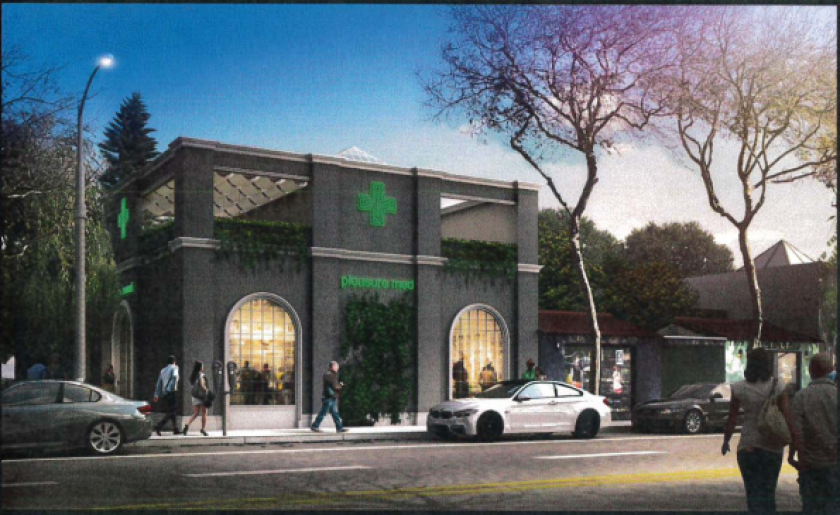 The owners of the Pleasure Chest are getting into the cannabis business with a high-end cannabis store, lounge and delivery service.

Eger could not immediately be reached for comment Wednesday morning, but according to food website Eater, she sent an email to City Council members saying: “The business is to have outdoor space for smoking pot — and I don’t know why my congregation members and participants have to walk through clouds of marijuana to get to synagogue.”

“It’s a little scary,” he said, adding that he believes the cafe’s air-filtration system will alleviate those concerns. “We’re hoping to have a great relationship with her.”

Lowell Herb Co. is one of California’s largest high-end cannabis businesses. During the daytime, the cafe will sell the company’s products — as well as others from local cannabis businesses — with meals and nonalcoholic cocktails.

After 9 p.m., entertainment company Houston Hospitality — owners of L.A.-based Pour Vous, Piano Bar and No Vacancy — will operate a cannabis bar at the cafe. (The state does not allow businesses to sell cannabis and alcohol at the same time.)

Black said the goal is to make cannabis as acceptable as alcohol in social situations.

“Why can’t you go out to a really nice restaurant or cafe and instead of ordering beer or wine with your meal, you can order cannabis?” he said.

As the first cannabis cafe, the pressure is on, Black said. The city of West Hollywood will be monitoring the business for a year until its cannabis consumption license expires to determine how it’s affecting neighbors like the Kol Ami congregation.

“We want to set a high bar” for businesses allowing cannabis consumption, he said. “We better do it right and not mess it up for everybody else. We all feel that pressure.”