The Commerce City Council meeting had started when Councilman Leonard Mendoza stepped onto the dais and sat a seat away from Mayor Pro Tem Ivan Altamirano, the man he accused of sucker-punching him.

A month earlier, a brawl involving four Commerce officials at a government convention in Indian Wells brought out the police and generated national headlines.

There were no physical clashes at this council meeting. But there were arguments over an issue that had divided this working-class industrial town southeast of downtown L.A. for some time — cannabis. Many believe this was part of the reason for the fight at Indian Wells, and officials clashed again at the meeting over how much the city should embrace cannabis businesses. It got so heated that a councilwoman had to apologize to a high school girls water polo team sitting in the audience.

At the heart of the problems in Commerce is mistrust toward officials in City Hall, with residents calling on city leaders to allow voters to weigh in on whether cannabis businesses should operate in the city.

Since last year, the twice-a-month meetings have been tense. Residents and business owners, including members from the Church of Scientology, have voiced their opposition to cannabis businesses. Demonstrations have been held outside City Hall and activists have gathered thousands of signatures.

Sharon Basic, a longtime resident, said she wasn’t surprised by the fight in Indian Wells, given the tenor of recent meetings at City Hall.

Then again, there is no shortage of sordid drama when it comes to small town politics in southeast Los Angeles County.

In South Gate, a councilman took a bullet and a punch as he fought corruption. In Cudahy, politicians were targets of death threats, vandalism and a Molotov cocktail attack. In Bell, nearly the entire City Council — along with administrators — were arrested for misusing public funds. Smear campaigns falsely accused people of being boozers, rapists and terrorists.

The brawl involving four council members from Commerce during a municipal seminar in Indian Wells on May 18 dovetailed neatly into that history. The California Contract Cities Assn., an advocacy group for cities that contract for public services and organizer of the convention, suspended the town’s membership pending a criminal investigation.

“For local governments to be subsidizing frat parties under the guise of civic engagement is a slap in the face to the residents of these cities, who are often working class and struggling to make ends meet,” she said.

Garcia said while educational panels were conducted over the course of the seminar, it also included a golf tournament, swag bags containing wine, and tickets to free alcoholic drinks at sponsored events. The cost of attending the event is $600 per person.

Mendoza told The Times he was in the middle of a conversation when Altamirano interrupted. He said he told his council colleague to step away. Shortly after, he said he felt a blow and woke up in a hospital. In the room were his wife and a law enforcement officer.

A photo showing Mendoza lying on the ground unconscious with his arms and legs spread out was distributed on social media and the news. Mendoza suffered a gash to the back of his skull, cuts and bruises.

A photo of Altamirano with cuts to his lips also made the rounds.

The Riverside County Sheriff’s Department said no arrests have been made and the investigation is continuing.

The physical fight may have ended there, but the public relations one had just started. 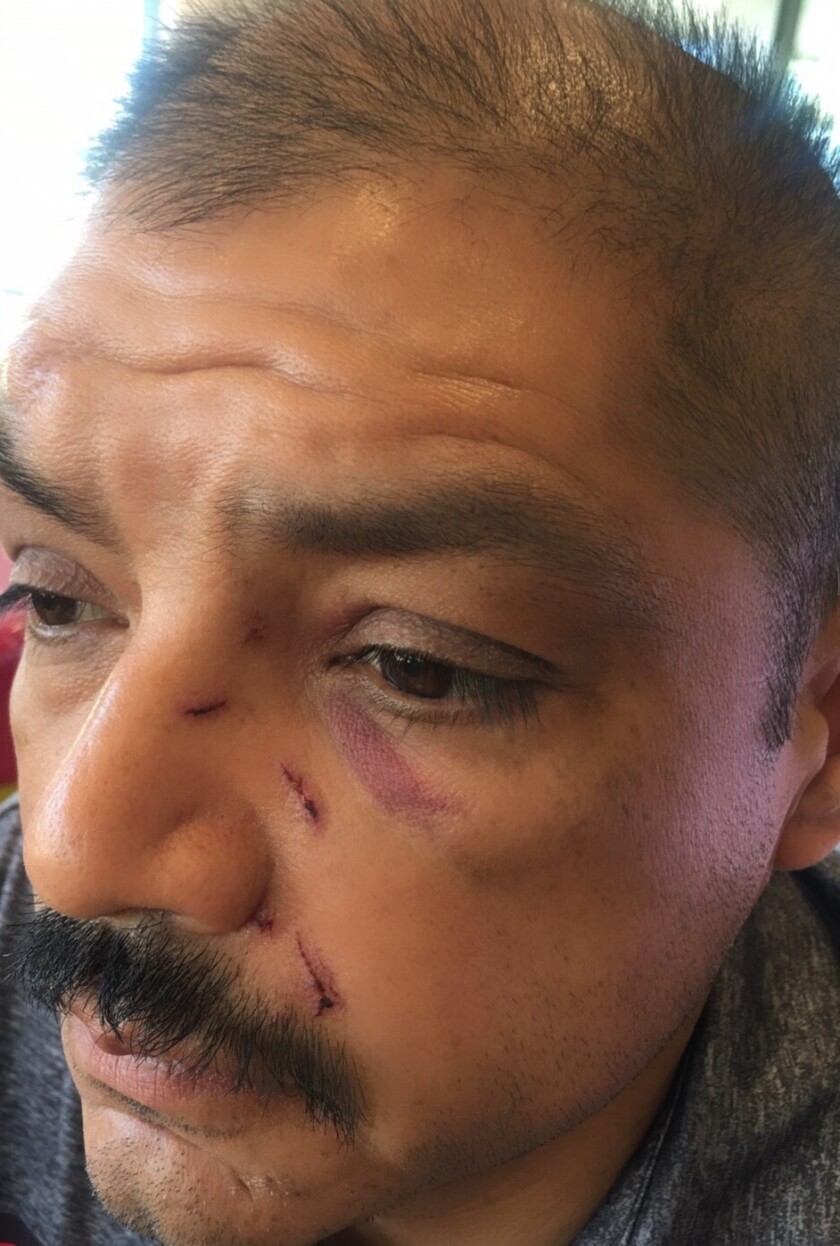 Councilman Leonard Mendoza after a fight.

Michael Zweiback, an attorney for Altamirano, said his client was defending himself from Mendoza, who he said had been bullying his client for months.

“We believe that witnesses will corroborate that he threw the first punch,” he said. “The aggressive actions by Mr. Mendoza toward my client stems back months.”

David Hakimar, the attorney for Mendoza, denied those claims and said his client never got a chance to defend himself.

“The best defense is attacking the victim,” he said. “We’re expecting felony charges against the vice mayor.”

In a statement, Mayor John Soria said he walked over to defuse the argument then saw Mendoza on the ground and Altamirano “standing by with a facial injury.” Then two men attacked him and Altamirano, he said. Soria said he knew the men and planned to file charges. He could not be reached for comment Wednesday.

Councilman Hugo Argumedo called the mayor a liar in televised interviews and said he may have been punched by him.

Argumedo did not respond to requests for comment for this article.

The melee involved more than seven people, including political consultants, government vendors and elected officials. Among them was Hector Chacon, a political strategist who works for the office of Sen. Bob Archuleta (D-Pico Rivera) and Mario Beltran, a political and cannabis consultant, according to witnesses who spoke on condition of anonymity because of the sensitivity of the incident. They said part of the argument was tied to cannabis.

The senator’s office did not respond to a request for comment, and Chacon could not be reached.

In a phone interview, Beltran said he was at the convention and tried to intervene.

At the time, Mendoza told The Times he felt the attack was related to his stance on the cannabis issue.

“They’re not happy with me because I’m not playing ball,” he said. “This is their way to scare me, but all it does is light a fire under me and it makes me want to fight harder.” 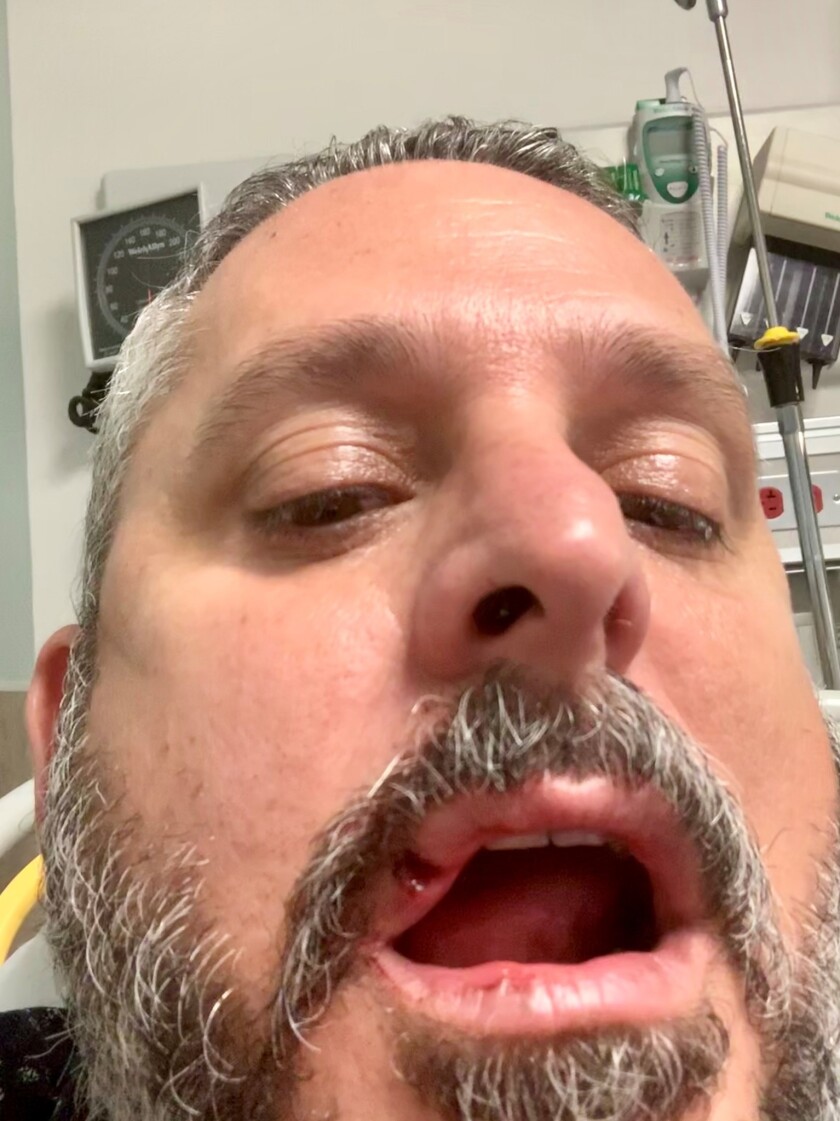 Proponents and city council members who have voted in favor of cannabis businesses said there is as much support for the industry as there is opposition for it in their city. They said some people are misinformed about the industry and ignore its medical and fiscal benefits.

The disagreements over cannabis began last August when the city held community forums to educate the public about the legalized industry and to gauge public opinion about having cannabis businesses in town.

A survey was distributed to residents, but city records show the survey didn’t directly ask whether people wanted cannabis businesses in the city. Instead, it asked people to rank their concerns, select the type of cannabis business they wanted to regulate and what programs to fund.

Mendoza and Councilman Hugo Argumedo raised the issue early on at a council meeting. Soria disputed their claims.

The firm conducting the surveys told residents the surveys were online and could be filled out anonymously. But critics argued that the results were skewed because nonresidents could have participated.

Additionally, the firm and city officials argued that since 55 percent of residents in 2016 voted in favor of Proposition 64, known as the Adult Use of Marijuana Act, legalizing the sale and distribution of cannabis, they also supported it in the city.

Critics disagreed and argued that a vote for a state measure didn’t mean a vote for having cannabis businesses in their backyard.

The following month, citing overwhelming support, Soria, Altamirano and Councilwoman Oralia Rebollo approved the cannabis ordinance that paved the way for businesses to start submitting applications. Mendoza and Argumedo voted against it, according to minutes of that meeting.

Official City Statement
„The City has been made aware of reports of a confrontation between some City officials that took place outside of the City’s jurisdiction. Given that, and the fact that the City is unclear on the specifics, the City has no further comment at this time.”

Since then, Mendoza and Argumedo have become vocal critics and have rarely supported any cannabis items that come forward for a vote, arguing that a citywide vote should take place first.

“It was too much of an important issue and too controversial for me to make a decision for the residents,” Mendoza said. “I was also hearing people wanted to vote on it, and I agreed.”

Things got really ugly on May 18, more than a week after the city authorized 22 cannabis businesses to operate in Commerce. That’s when Mendoza and Altamirano were involved in the argument at the Renaissance Indian Wells Resort.

At the June 18 City Council meeting, debate ensued over the use of cannabis money to fund community programs.

Months ago the council had unanimously approved setting up a Community Benefits Fund in which cannabis revenue could be used to expand or fund programs. Mendoza said he would support the decision because it was for a good cause but felt uncomfortable over it.

“Let’s recognize this is money, money all of us agreed on to use in the beginning,” she said.

Argumedo asked that the money be moved to the general fund, a request he had made at prior meetings.

“So, for clarification, you’re saying to take ‘marijuana’ money as you’re calling it and put it [the] general fund? In essence you’re still saying it’s OK to use the money?” Rebollo said.

“There’s a lot of businesses …” Argumedo started to reply.

“Is that what you’re saying? “ Rebollo said, cutting him off.

Sitting in the crowd was the Schurr High School girls water polo team, which had recently won the CIF Southern California regional champions. Part of the money the council was debating would help pay for their championship rings.

The motion eventually passed, but it wasn’t long before Rebollo acknowledged what had happened on the dais.

“We’re sorry for the circus,” she told the water polo team.