When it comes to Europe’s fledgling cannabis sector, 2019 has seen the arrival of conquerers who have moved at a speed perhaps at odds with their relaxed reputation.

Yes, the Canadian cannabis companies are coming—as hard and as fast as they can manage.

The companies are bringing with them a huge advantage: since Canada has legalized marijuana, even for recreational purposes, the country’s industry leaders been able to go public, raise money, and look abroad to expand.

“The Canadian legislative situation has given Canadian companies a big advantage over those based in countries with more restrictive cannabis laws, especially when it comes to accessing capital markets,” said Pierre Debs, Canopy’s European chief.

“No one else is really positioned like [Canadian firms] are, capital-wise and opportunity-wise,” said Jamie Schau, a research manager at cannabis-industry analyst house Brightfield Group. The upper-hand comes with a sense of urgency, says Schua.

After all, “they’re only going to have this first-mover advantage once.”

But the market that Canopy, Tilray and Aurora are invading is a complex one. When it comes to cannabis, Europe’s rules remain highly fragmented and largely conservative—despite the Netherlands’, in particular, reputation for coffee shops and relaxed drug laws.

Medical marijuana products have recently become legal in Germany, the U.K., Italy, the Netherlands and Portugal, with France and Spain also on track to allow them soon, but they remain banned in many other countries.

“We expect the European Union to become the largest medical cannabis market in the world. And we expect this to be driven by the availability of medical cannabis through government-subsidized health care systems,” Tilray said in an emailed statement. 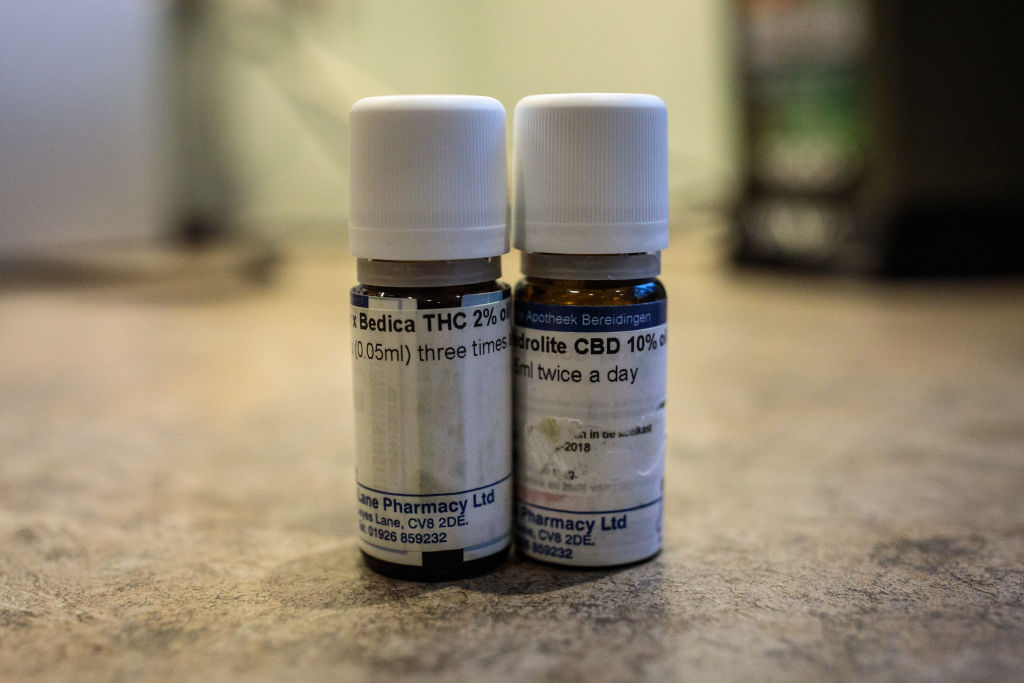 “There’s no doubt in the medical efficacy of cannabis and cannabis-related derivatives,” said Kiran Sidhu, the CEO of Oregon-based cannabis extraction firm Halo Labs, which recently bought a producer in the southern African nation of Lesotho in order to supply the European and African markets. “Where the issue really lies is how long will the snowball [effect] take in Europe that has occurred in the U.S. and Canada.”

However, even as medical marijuana becomes more accepted in certain EU countries, it would be a mistake to draw too close a comparison with the permissive scene in North America.

“The important thing for Europeans to understand is that the actual use of these medicines is far more limited than in some U.S. states or Canada, according to the patient numbers we are seeing,” said Brendan Hughes, the principal scientist for drug legislation at the European Monitoring Centre for Drugs and Drug Addiction (EMCDDA), an EU agency.

A few years ago, the European Medicines Agency authorized the use of GW Pharmaceuticals’ Sativex for multiple sclerosis treatment, but people shouldn’t think that acceptance of that specific medicine means they can smoke a joint for their backache, Hughes said. “There currently seems to be a difference between perception and reality,” he said.

Meanwhile, there is also a booming European trade in products containing cannabidiol (CBD), a non-psychoactive compound in the marijuana plant that is increasingly touted as an ingredient in various wellness products—albeit with little evidence for most of its supposed benefits. This sector also includes smokable plant material that looks an awful lot like regular cannabis, but contains extremely low levels of tetrahydrocannabinol (THC) the compound that gets people high. 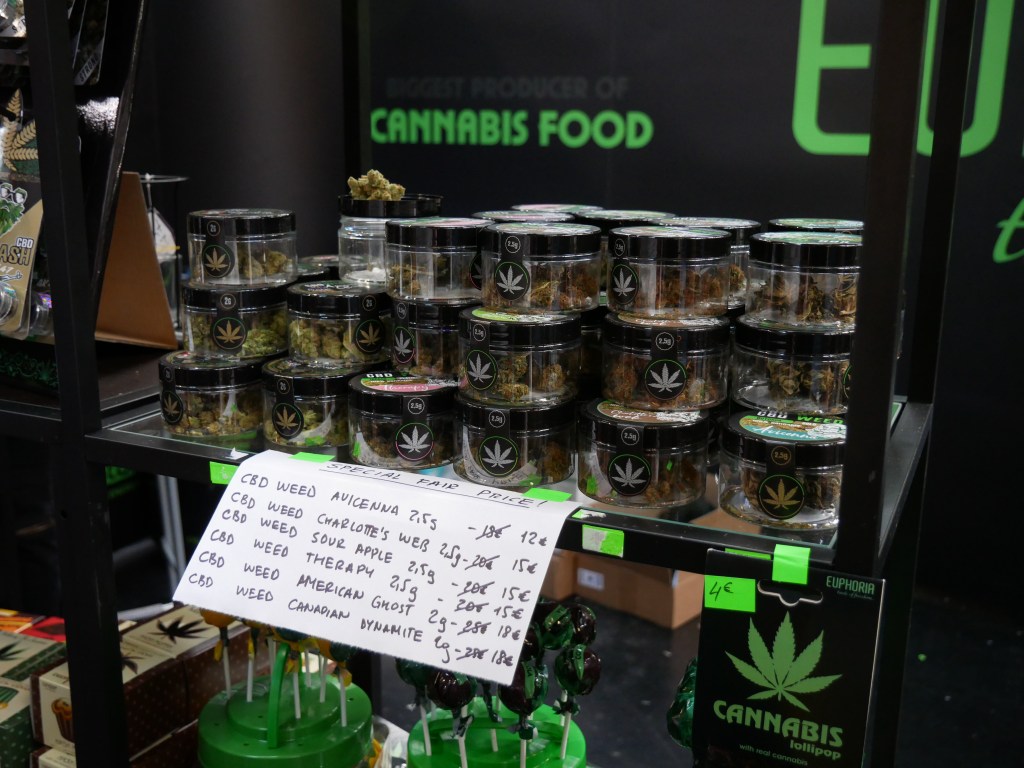 CBD is broadly legal across Europe, where Brightfield reckons the market is worth $416 million this year (compared with $5.7 billion in the U.S.).

However, at the start of this year EU food regulators created stricter guidelines for the sale of foods that contain the substance—like CBD cookies—and different countries are interpreting those guidelines in different ways. EU member states also have different rules about the claims companies can make regarding the benefits of CBD.

“We don’t believe the regulatory outlook is bad, but it is uncertain, and it is rapidly changing as governments try to get their heads around this new market, and to understand the distinction between CBD and cannabis,” said Barnaby Page of CBD sector market intelligence firm CBD-Intel.

And then there’s recreational marijuana, which has as yet not been fully legalized in any European country. That is about to change, though: the government of Luxembourg (population just south of 600,000) announced earlier this year that it would fully legalize cannabis consumption by resident adults, with strict controls on its sale. In other words, it is following the Canadian model. The question now is how influential its decision will prove elsewhere in Europe.

Luxembourg borders Belgium, Germany, and France and, although the idea is to ensure weed only gets sold to the locals, the country’s neighbors are concerned about the implications. Police in both Germany and France have expressed concerns that people may buy cannabis in Luxembourg and bring it back across the border, much as they already do with petrol, tobacco and alcohol, thanks to Luxembourg’s low taxes on those products.

However, there is a possibility that the legal situation could change in Germany, too—and that could be a real catalyst for a wider European shift, given Germany’s influential status in the region. 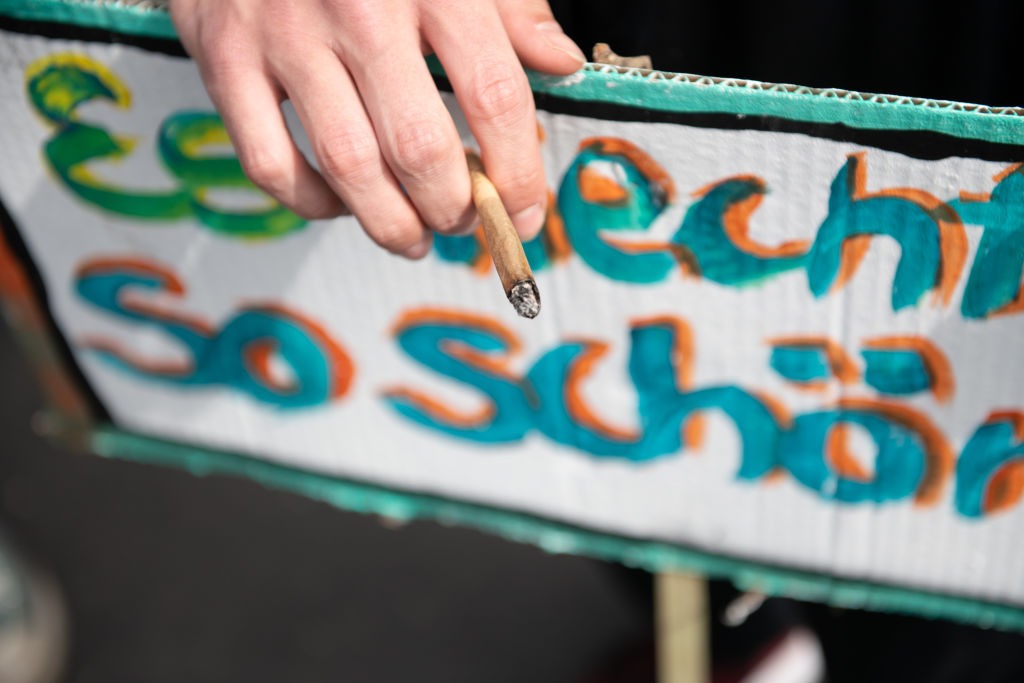 A protestor demanding the legalization of cannabis smokes a joint in Berlin, Germany. Credit: Paul Zinken—dpa.

The question of legalization in Germany is currently on the table because of the Green party’s surge in popularity. Once something of a fringe party, recent polls suggest the Greens could now seize votes from both left and right and form the next government. And the Greens have long favored regulated marijuana legalization.

“The conditions of the black market are harmful to consumers’ health,” said Kirsten Kappert-Gonther, a Green member of the German parliament and the party’s spokesperson on drug policy. “For the Greens, the reform of drug policy is a major concern. The legalization in Canada and in many states of the U.S. is perceived with interest in Germany. Real improvements require a change of government.”

Though laws continent-wide are gradually changing, there are plenty of local companies that say that they will ultimately have the home advantage.

Antonio Costanzo is one European who wants to fend off the North American threat. He’s the CEO of London-based medical cannabis company EMMAC Life Sciences, which was valued at around $96 million at its last fundraising round. For comparison, publicly-traded Canopy has a market cap of over $13 billion, while Aurora is valued at over $7 billion and Tilray at over $4 billion.

Like the Canadian companies, EMMAC has been on a spending spree this year, buying the French and Swiss wellness companies GreenLeaf and Blossom, taking over medical cannabis labs in the U.K. and in Spain, and setting up a joint venture in Italy. Costanzo, who previously served as Uber’s head of public policy after spending a decade in the online gambling industry, says experience with heavily regulated fields in the European context will be key to expanding there.

“We started looking at the European medical cannabis space and thought the biggest challenge was being able to navigate different legislations and…create a single market,” Costanzo said. “The advantage we have, being European, is we know how Europe works… It’s a very local play—you need to speak to regulators in each country.”

There is also some wariness of foreign companies pressuring European regulators to change their rules. The EMCDDA’s Hughes said he had heard of lobbying taking place at both the national and EU levels.

“As the Canadian industry is federally legal, a few of the big companies are now valued in multiple billions of U.S. dollars,” Hughes said. “We should be aware of the huge financial interests in opening the European market, particularly for recreational use, and the possibility of negotiating relatively loose regulations in order to maximize sales, following the direction of the alcohol and tobacco industries.”

So far, though, Europe doesn’t seem to be the same sort of pressure that’s been seen in the U.S., where legalization has come as the result of voter initiatives—Illinois last month became the first state to take a legislative path to legalization, rather than responding to ballot pressure. In the U.S, the push to legalize is also tightly bound up with protesting high levels of incarceration, particularly of African-Americans, on drug charges for possessing cannabis.

“The intensity and advocacy in the U.S. is higher because you have this social justice and equity component of it. Parts of the population were discriminated against for many decades,” said Chris Burggraeve, a Belgian-American former Coca-Cola marketing executive who heads up an American cannabis and CBD brand called Toast. “Every single candidate for election at any level will need to have a point of view on marijuana because it’s a voters’ issue, whereas in Europe I’m not sure it’s hot enough to be a full voters’ issue.”

“Today, we’re not even looking at this,” he said. “But once it’s legal, we would be crazy not to look at it.”