Driving down Highway 401 in southern Ontario, with the FM dial tuned to 87.9, the 1990s-era rap music fades into an ad, offering a free joint with every purchase over $20 between midnight and 4:20 a.m. at the Pot Shoppe.

A second ad then promotes a „car show for Jeeps” in the parking lot of the Pot Shoppe every Tuesday night.

„Don’t forget, we have free coffee for the driver and our famous Pot Shoppe slushies at half-price for the passenger,” the ad says. „THC-infused slushies — just a little more brain freeze.”

The transmission tower for the station — Real Peoples Radio — stands over a small shack that was once the second cannabis store to open in Tyendinaga Mohawk Territory, located about 200 kilometres east of Toronto. That shack is now the broadcasting studio for a pirate radio station that lives on the edge of the radio dial, and also streams online. 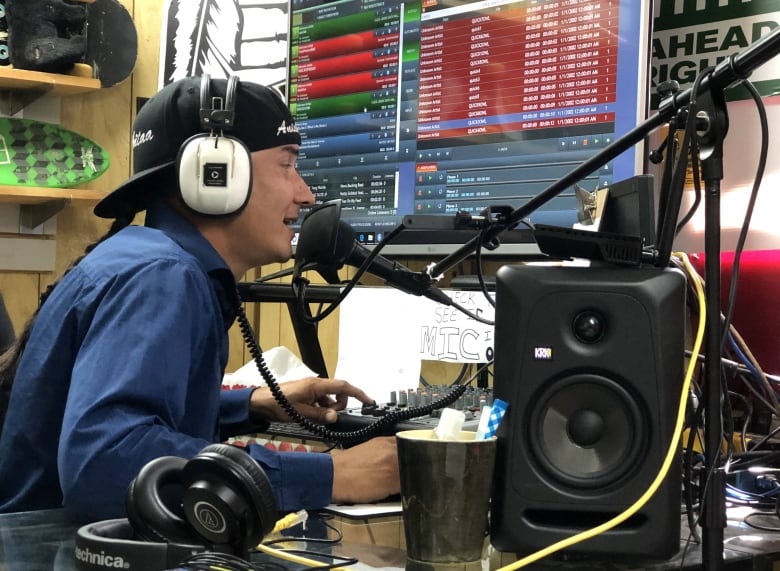 Joseph Owl, a DJ for pirate radio station 87.9 FM out of Tyendinaga, at the microphone. (Stu Mills/CBC)

Behind the microphone is Joseph Owl, from Serpent River First Nation, Ont., a full-time DJ at the station who hosts the 6 a.m. to 10 a.m. show.

Owl was offered the job through friends and started working at the station at the start of June.

„This is the best [employment] opportunity I’ve come across,” he said.

The station is one of many offshoots from a cannabis-infused economic boom in this Mohawk community of 2,100, nestled on the shores of the Bay of Quinte, between Belleville and Kingston, and just a short drive from Prince Edward County, a growing tourism hotspot.

There are dozens of cannabis stores here — some estimates place the number between 40 and 50 — with names like Smoke Signals, Better Buds, Legacy 420, Peacemaker 420, Buddy’s Dispensary, Fiddler’s Green and Cannabis Convenience. 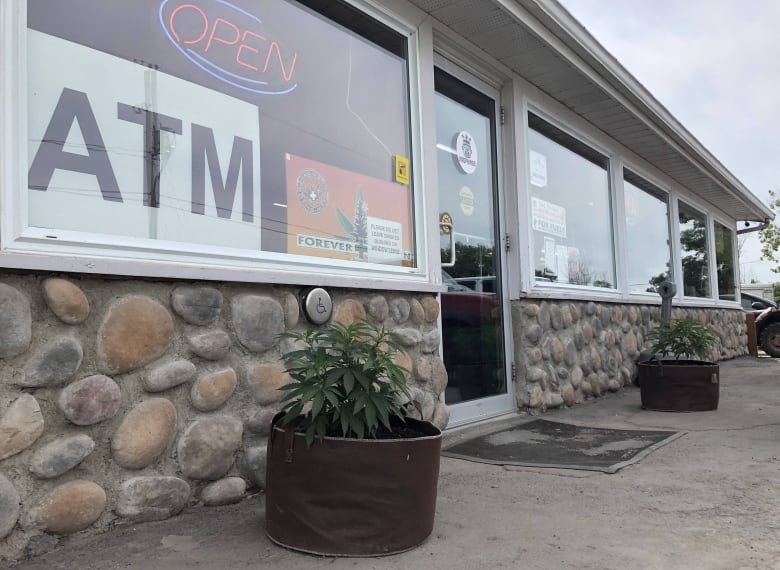 Cannabis plants grow in pots at the entrance to a cannabis store in Tyendinaga. (Stu Mills/CBC)

Cannabis plants sprout outside the front doors of some homes and hundreds more line the surrounding back lots and fields, for harvesting in late summer or early fall.

The community is dotted with renovation and construction projects, including several new gas stations and at least one new franchise restaurant.

Much of it is attributed to the influx of cash coming from sales at local cannabis stores, then spreading throughout the community.

„It’s a straight up economic boom,” said Jamie Kunkel, who owns one of the local shops, Smoke Signals.

’Thousands of cars on a daily basis’

Money was already coming into the community from outside customers looking for cheaper gas and cigarettes, Kunkel said. But the increased traffic from cannabis stores has meant more revenue for existing businesses.

„All the stores that existed prior to cannabis were all running busy all day long, making good money,” said Kunkel. „You get the big rush coming in from the cannabis, thousands of extra cars on a daily basis…. Now there’s lineups for cigarettes, lineups for gas.”

Kunkel said his own cannabis business has grown exponentially since he began a little over three years ago. He was involved with a business partner and then branched out on his own, opening a store out of his home before constructing a separate shop and eventually franchising out to four other First Nations in Ontario.

He also bought the land adjacent to his storefront to run an annual Indigenous „Cannabis Cup” event; hip-hop group Naughty by Nature performed this year. 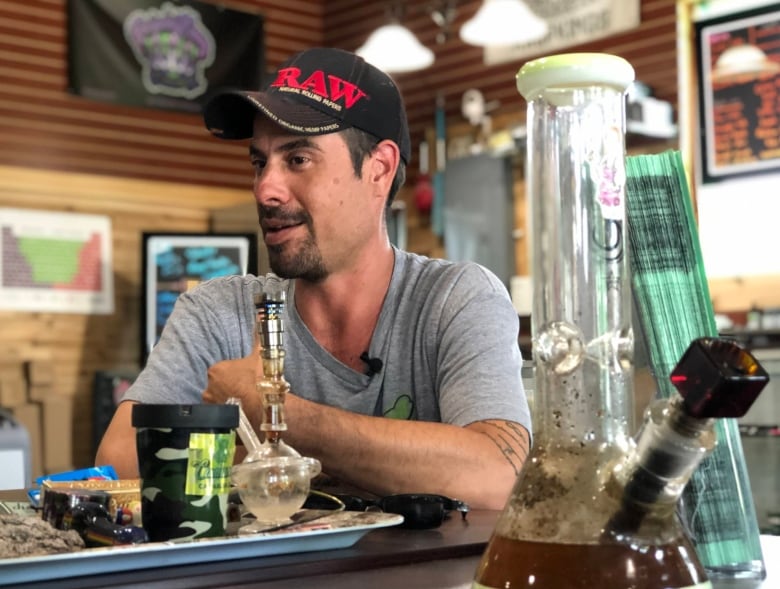 Jamie Kunkel, owner of Smoke Signals, said it would be almost impossible to shut down Tyendinaga’s cannabis industry. (Stu Mills/CBC)

The opening of Ontario’s licensed cannabis shops in nearby cities like Kingston, Toronto and Ottawa — places where Tyendinaga draws the majority of its customers — has had some impact, Kunkel said. But overall, business is steady.

„Our traffic went down, but our sales stayed the same or increased, because the traffic that we did keep were the bigger ones,” said Kunkel. „They are coming in, they are buying ounces … half-ounces, plus whatever else it is they want.”

Kunkel said his prices are sometimes $10 less a gram for the same strain of marijuana sold at Ontario’s regulated stores. „[Customers] don’t want to go to those stores, they don’t want to pay that much tax,” he said.

Susan and John Lovecchio, senior citizens from Brighton, Ont., about 60 kilometres west of Tyendinaga, said they shop at the Pot Shoppe because of the service.

„They’ve been super … they are a pleasure to work with,” said Susan Lovecchio, who received a senior’s discount of $24 and spent about $130 on cannabis products.

Lovecchio said she shops in Tyendinaga because there are no marijuana shops near her home. „I think it’s great. The Natives are wonderful and they’re making the most of this. And I say, 'Yeah, go for it.'”

A cannabis economy began to bloom in Tyendinaga after the Liberal government first announced it would legalize cannabis. By Oct.17, 2018 — the date of legalization — the roots of the cannabis industry had already sunk deep into the community.

It’s all unfolded outside of the federal, provincial and territorial regulatory framework.

Ottawa has said that federal and provincial cannabis laws would apply on reserves, but individual provinces and territories can make room for agreements with First Nations.

According to the office of federal minister of border security and organized crime reduction, legal cannabis can only be sold through government-regulated stores.

„The only legal quality-controlled source of cannabis in Canada is through provincially or territorially authorized distributors and retailers or federally licensed sellers that have the authorization of their health care practitioner to access cannabis for medical purposes,” said Bill Blair’s spokesperson, Marie-Emmanuelle Cadieux.

Ontario’s Ministry of the Attorney General said in a statement that the province continues to „engage First Nations” who want to explore their own models for on-reserve cannabis sales. But, it said, „selling outside of Ontario’s authorized retail system is illegal under federal and provincial law.”

Ontario recently announced it will soon allocate 50 new cannabis retail licences — including eight for First Nations on a first-come, first-served basis — up from the 25 licences handed out by the province earlier this year. 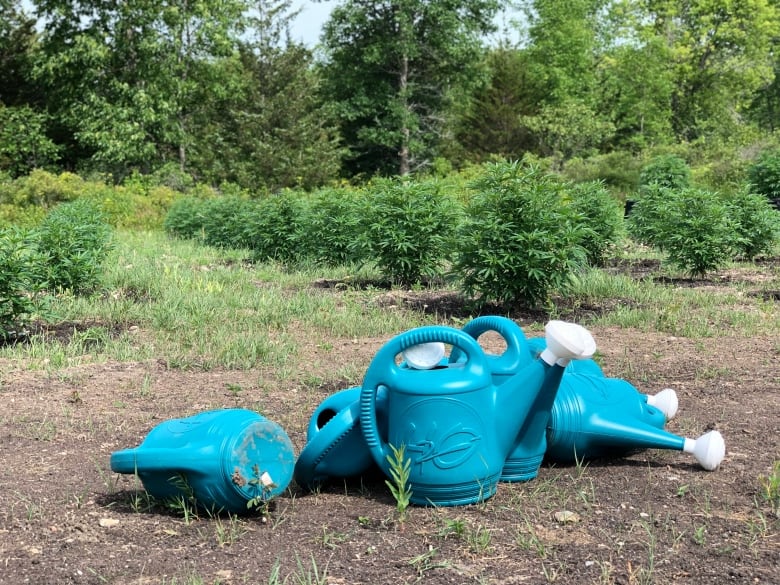 Plastic watering cans piled by a cannabis field in a back lot in Tyendinaga. (Stu Mills/CBC)

According to Kunkel, there is little appetite in Tyendinaga to fall under federal and provincial rules and pay taxes, even if a deal were struck with the band.

The cannabis industry in the community is also a political statement, Kunkel said, a display of sovereignty from a people who never surrendered their rights to self-governance.

The Tyendinaga band council, known as the Mohawks of the Bay of Quinte council, passed an interim cannabis bylaw on Oct. 16, 2018, and began community consultations on a permanent bylaw, which are still ongoing.

The council released the results of an online survey in April that was completed by 147 on-reserve band members. It revealed divided opinions on the issue, with many leaning toward stronger band control over the cannabis industry.

Some of the participants, though, questioned the survey’s accuracy, noting that it could be filled out multiple times by the same person and said that the questions were skewed.

Some voiced concern over the rise in prices driven by the booming cannabis economy, along with complaints over the increased traffic and safety concerns.

„The pot market has driven up the price of property, making the housing situation worse,” said one respondent.

„There does not appear to be any control over who sells cannabis or where shops are set up. I can think of a thousand things I would like our reserve to be noted for, but one is not for having a cannabis shop on every corner,” said another respondent.

Others said the industry was having a positive impact.

„The majority of these shops are employing a lot of community members that, without these shops, may be unemployed due to lack of transportation and job opportunities within our community,” said a respondent.

„With a few minor changes, I believe that the cannabis industry within our community can become something that will allow for our community to succeed,” said another.

The Mohawks of the Bay of Quinte band council did not respond to an interview request. 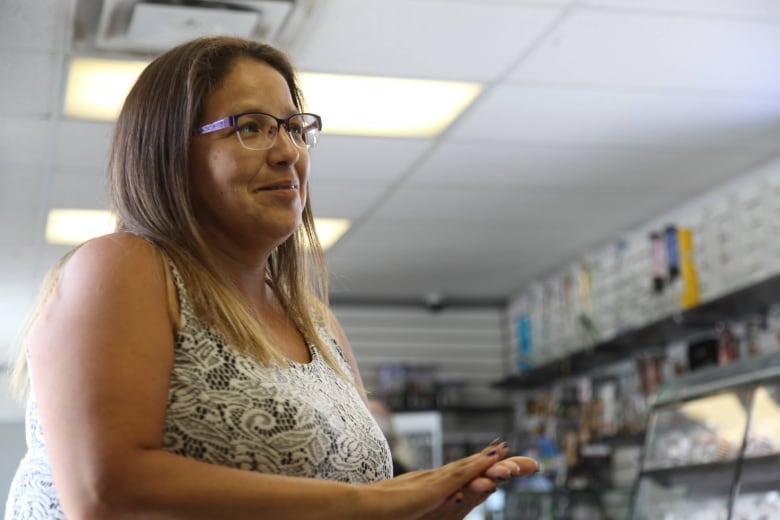 Tess Brant, a manager at the Pot Shoppe, says the job has changed her life. (Stu Mills/CBC)

Tess Brant, a manager at the Pot Shoppe, said her job in the cannabis field „has made a huge improvement” in her life, beyond just her finances. „It’s kept me on the straight and narrow,” she said.

Brant, a mother of four, is a recovering addict and took the job a little over a year ago after completing rehab.

„Being here, coming here, gave me a purpose,” said Brant, noting she no longer smokes marijuana and instead uses CBD oil, a non-intoxicating extract derived from the cannabis plant.

Brant works from 8 a.m. to 4 p.m., running the store and handling the back end of the business, dealing with products and choosing what to sell or what take a pass on.

Brant said most customers come from Belleville, Kingston, Toronto, Ottawa and Montreal; they even had a couple from Finland who stayed for a week to check out all the shops in the territory.

Back at the studio of Real Peoples Radio, the speakers are thumping with hip-hop beats that fade as Owl breaks in with the weather — in his own pirate-radio style.

„It’s gonna be hot, high of 28, humidex out the roof. And all the crazy numbers they give you, just know that this is hot,” said Owl. „And what are you doing out there on this hot day? Are you going on an adventure? Are you sending your kids off to camp so you can sit back and have your own at-home adventure?”

Another ad then kicks in: „Want a free pre-roll?”