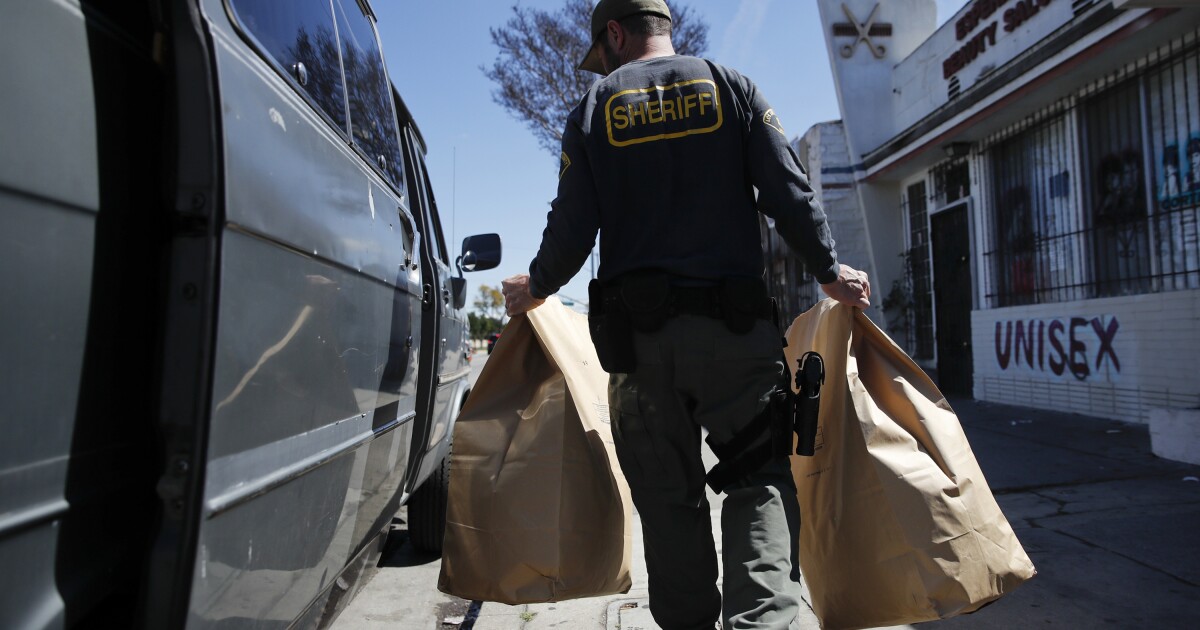 California authorities have tripled the number of raids on unlicensed cannabis shops in the last year and seized $30 million in pot products, but legal industry leaders say enforcement is still inadequate to break the dominance of the black market in the state.

In 2018, the first year of licensing, the state Bureau of Cannabis Control worked with local law enforcement to serve six search warrants on unlicensed pot shops and seized some 1,594 pounds of cannabis worth $13.5 million.

During the first six months of this year, the bureau served 19 search warrants on unlicensed sellers, confiscating more than 2,500 pounds of illegal marijuana products with a retail value of $16.5 million, according to data released last week. The state has also seized $219,874 in cash from illegal pot shops.

And to further strengthen enforcement, Gov. Gavin Newsom this month authorized fines of up to $30,000 per day against unlicensed marijuana growers, distributors and sellers.

“We recognize the importance of enforcement for a strong regulated cannabis industry and continue to partner with local jurisdictions to address issues related to unlicensed cannabis businesses,” said Lori Ajax, chief of the state bureau.

But industry officials say there are still thousands of illegal cannabis growers and sellers in California, a black market some predicted would be curbed when California voters approved Proposition 64 in 2016, allowing state-licensed firms to grow and sell marijuana for recreational purposes.

Despite the uptick in enforcement efforts, the number of actions so far “is severely inadequate,” according to the California Cannabis Industry Assn.

There are thousands of unlicensed retailers operating so there should have been at least hundreds of enforcement actions so far, said Lindsay Robinson, executive director of the association, who noted many illegal pot shops are easy to find because they advertise.

“California has always struggled with enforcement of the illicit industry,” Robinson said.

The state had a year to create a new bureau to draft regulations and procedures to license the new cannabis market and state officials have acknowledged problems, including the refusal of most cities to allow cannabis sales, that have led to many fewer licenses than expected. High state and local taxes that add up to 45% to the cost of licensed cannabis have also stymied the legal market.

Still, Ajax said, the bureau has done “tremendous ” work “in accomplishing our mandate to develop a comprehensive regulatory system under challenging conditions.”

A new audit by the state Department of Finance also concluded that the bureau’s staffing and facilities are “not sustainable to provide effective and comprehensive oversight of cannabis activities throughout California.”

Auditors said a recent check found the bureau’s Enforcement Unit had filled only 15 of its 68 authorized positions. The bureau says it has filled 26 positions so far — still less than half those authorized.

“With the existing number of Enforcement Unit staff and only one field office, the Bureau’s ability to process complaints, perform inspections and investigations, and review and inspect testing laboratories is severely impacted,” the audit said.

Bureau officials note their first year was focused primarily on creating, staffing and implementing a complex licensing system. But there are also other issues that are an impediment.

The bureau does not employ any sworn peace officers, so to enforce the law it relies on help from local law enforcement.

Last month, the Costa Mesa Police Department served search warrants for the bureau on two unlicensed pot shops, and authorities seized $2.7 million worth of cannabis products, the biggest single-day haul ever by the bureau.

Separate enforcement efforts targeting illegal cannabis grows have been mounted by the California Department of Fish and Wildlife, which last month joined the Trinity County Sheriff’s Office in serving 15 warrants. The operations seized 12,548 illegal marijuana plants, 801 pounds of processed marijuana, 15 firearms and $435,875 in cash, according to the agency.

Robinson said her group would like to see more effort involving retail shops. The trade group was disappointed that the new state budget signed by Newsom last month does not include the industry’s proposal to add $10 million for enforcement targeting unlicensed retailers and to give the bureau sworn peace officers to enforce the law.

Newsom’s office did not respond to requests for comment on the budget, staffing and enforcement issues.

Opponents of Proposition 64, including Scott Chipman of the group Americans Against Legalizing Marijuana, say lax enforcement targeting illegal pot shops is breaking a promise of the initiative’s backers that the new law would allow the state to rein in the illicit market.

Critics point to research by the firm New Frontier Data, which estimated California’s black market was worth $3.7 billion last year — more than four times the size of the legal market.

“A key point of Proposition 64 was to reduce or nearly eliminate the black market,” Chipman said. “The opposite has occurred. We are the marijuana drug cartel for the U.S.”

The tougher enforcement is being paired with a new public education campaign by the bureau dubbed “Get #weedwise” that encourages consumers to purchase cannabis from licensed firms and warns unlicensed businesses that they face consequences if they are not licensed.

Ads on YouTube, cannabis websites and those soon to be on billboards warn consumers about such pitfalls as chemicals and mold that can be found in illegal, untested cannabis.

To help consumers, the bureau has set up a website, CApotcheck.com, where consumers can verify the legal status of a cannabis business.

The campaign is also warning illegal businesses that they could face confiscation of cash and cannabis if they continue to engage in unlicensed activity, Ajax said.

“We believe that this campaign will directly impact consumer safety by clarifying that only cannabis purchased from licensed retailers has met the state’s safety standards, while sending a clear message to unlicensed businesses that they need to get licensed or shut down,” Ajax said.